"One man's magic is another man's engineering. Supernatural is a null word."
- Robert A. Heinlein

Yes, I'm way behind on reading the marvelous, long-running Case Closed series and Gosho Aoyama wasn’t the only contemporary queuing on the slopes of Mt.-to-be-Read, which is why there has been an influx of posts on more recently published detective stories this year. So here is, without further ado, the long overdue review of the forty-seventh volume of Case Closed (a.k.a. Detective Conan). 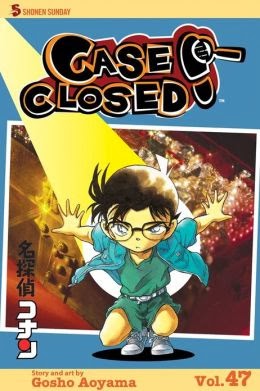 Traditionally, the story opening the book began in the final chapter of the previous volume and involved a woman, Tomoko Kariya, enlisting Richard Moore to find her missing cell phone, but the seemingly innocent request has tragic repercussions for his client – who's found murdered inside her car parked near a bridge. The three main suspects all claim to have been home at the time of the murder and a pair of housekeepers affirm their statements, however, they all relay on three senses: sound, sight and sense. Suspects were immersed in their respective occupations and were either heard speaking, seen moving or being smelled smoking a pipe from behind a sliding door.

Interestingly, Conan is repelled in playing the manipulative detective on the sideline, guiding everyone to the clues and their correct interpretation like a puppeteer, by a suspicious-minded Rachel – slowly beginning to believe Edogawa Conan and Jimmy Kudo may be one and the same person. There's a short chapter, functioning as an addendum for this storyline, in which Conan goes through some comic book-style shenanigans to drag a red herring across the trail. One of the few flaws (IMHO) in this series is Conan's insistency to keep Rachel in the dark when, logically speaking, she would be his most reliable ally in every difficulty thrown in his path over the course of the series. But this one pet peeve of mine should reflect poorly on this excellently plotted, well clued mystery and some of hints involving literature and the changes in society were splendid.

The next story is possibly my favorite from this collection and, as unsurprisingly as pulling a quarter from thin air, the plot revolves around a frame job that could only be pulled off by jumping through time and space – which makes this an impossible crime story!

Conan, and his friends, finds Detective Takagi gazing dreamingly at a brooch coveted by Sato (i.e. A Metropolitan Police Love Story), but a man wearing a motorcycle helmet and brandishing a pistol shatters the trance. Takagi identifies himself as a plainclothes policeman, but the robber only laughs and sprints off – only to be cornered on top of a building. Rooftops of high buildings in Japan are apparently fitted with fences for safety, but it wouldn't deter a jumper and the robber takes the leap in front of their eyes. When they look over the edge, mere seconds later, they see the body of the robber on top of a truck.

Slowly, but surely, the plot begins to morph in an inverted mystery, which poses more questions than answers, because they saw a man go over the fence and not a dummy being dragged over it with a wire. If the death of the jewelry store robber was an elaborate murder disguised as suicide, they now have to explain how his killer miraculously disappeared mid-fall. And while Aoyama draws somewhat on his artistic license as a comic book artist for the explanation (nobody would attempt this trick in real-life), it demonstrates, once again, how you can play around with a three-dimensional crime scene within a visual medium and I think stands comparison with other impossible tricks of its kind. Not as simple (as it's clever) as Edward D. Hoch's "The Long Way Down," but definitely better than the two-part Jonathan Creek episode The Problem at Gallows Gate (1998) – which has almost a similar set-up of plot and reportedly got rehashed in Sherlock. I was also reminded of the second, seemingly impossible murder from Richard Purtill's Murdercon (1982) and, reading back my review, and I commented then on how that part of the plot reminded me of Case Closed and Jonathan Creek.

Finally, Conan and Rachel are on a "double-date" with Harley and Kazuha, but lugging a pair of young, bright sleuth hounds to an otherwise spectacular magic show is bound to create a bored, armchair detective version of Statler & Waldorf – laconically showing the plain woodwork and mechanics behind the magic of stage illusions. Nonetheless, they manage to befriend the magician, alongside his illusionist circle of friends, who are on their way to the home of their teacher, a once famous magician himself, who has been missing for the past ten years.

Not long after Conan and Harley passed the threshold of the “Magician’s Castle,” a murderer strikes under the cover of a blackout in one of the hallways and the victim, curiously enough, revealed earlier to perform “The Resurrection of the Witch” as a throw at the mantle of their teacher. The main trick is one I expected to be used for a locked room mystery and, in a way, it was sort of an impossible trick, but Aoyama turned it to a different angle with a good result. However, Aoyama obviously came up with the trick first and plotted a story around it, which he began by retracing the premise of a much earlier story and retouching it. Plot-thread about the missing teacher is not resolved and the secret notes only exist to provide someone with a motive. It’s still good and clever little detective story, but even I think kowtowing to proper plotting has its limits. Still loved the opening part the most.

In closing: an excellent collection of mysteries and every volume has (at least) one ace of a story, sometimes more than one, which makes opening a Case Closed book always a rewarding read. The entire series is a compendium of the genre and chucks everything at the reader, from traditional whodunits and locked room murders to thriller-based story arcs and inverted mysteries, and while the ongoing storyline moves slowly, the series has yet to draw a single yawn from me – even after nearly fifty installments. If you're a mystery fan and aren't reading Case Closed, I look with a deep sense of pity upon the barren wasteland that is your intellectual life.

My other Case Closed/Detective Conan reviews: