"Hostilities exist. There is no blinking at the fact that our people, our territory and our interests are in grave danger. With confidence in our armed forces, with the unbounding determination of our people, we will gain the inevitable triumph, so help us God."
- President Franklin D. Roosevelt (December 8, 1941)

There was a period when variation was a part of my reading habit and nuzzled at other genres, such as the "Lost World" yarns from The Complete Land That Time Forgot (Edgar Rice Burroughs; collected in 2007), before I shackled myself to the mystery genre with this blog. I really should pick up a non-mystery novel again and Max Allan Collins' The Pearl Harbor Murders (2001) helped me remind there's actually more to read as well as providing a terrific example as to why I'm hooked on detective fiction. 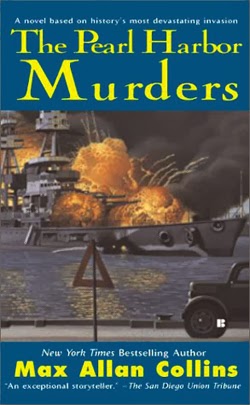 The events from The Pearl Harbor Murders begin on December 5, 1941, when there are less than forty-eight hours between the unprecedented attack on the Pearl Harbor and America’s entry into the Second World War, but Edgar Rice Burroughs does not believe Oahu is a target for an invasion – and neither does General Short. Besides, there's a trouble brewing on the island. Burroughs is requested to keep an eye on his German neighbor, Otto and Elfrieda Kuhn, alleged Nazis with family ties to Heinrich Himmler.

Meanwhile, "Hully" Burroughs (son of) is requested by a sensational band singer, Pearl Harada, for her father to fix an appointment with Col. Fielder. Pearl and Bill Fielder (son of) have plans, but her mixed blood and war looming at the horizon makes marriage a problematic issue in 1941. She simply wants to plead her case to the colonel.

"Disaster Series" distinguishes itself from other (mystery) novels featuring historical figures, because they were, mostly, present at the time of the titular catastrophes and hard facts are seamlessly integrated with the fictional aspects of the story. Collins' endnotes referring back to the texts consulted are reflected in the story, not just by finding a satisfying balance between fact and fiction, but in conjuring up images of Hawaii on the brink of war that felt alive – from the white beaches of Waikiki to the markets of China Town. Of course, there were more direct references to the racial tensions and hierarchy (e.g. issei and nisei), but I think Earl Derr Biggers (Charlie Chan Carries On, 1930) and Juanita Sheridan (The Waikiki Widow, 1953) would recognize Collins' Hawaii as theirs.

I'm not overly familiar with Edgar Rice Burroughs' work, having only read The Land That Time Forgot trilogy and name, maybe, two of his characters, but enjoyed how Collins sketched in Burroughs personal life from the man's own point of view and loved the anecdote about the controversy surrounding a World War I Tarzan novel. Tarzan in the trenches of the Great War? My interest is piqued! I was also interested in the relationship between father and son, which, in a detective story, immediately begs for a comparison with Ellery and Inspector Richard Queen, but there relationship was never explored in-depth and was more of an excuse to get Ellery on the crime-scene without pesky questions being asked. I was more reminded of Herbert Resnicow's Ed and Warren Baer, making the first of two appearances in The Dead Room (1987), who, despite tragedy close at home, have a good relationship and are drawn into a murder investigation out of necessity instead of finding it stimulating mental exercise.

Still, Burroughs doesn’t do too bad on his outing as an amateur snoop of fiction, awaking from a bizarre nightmare, which he jotted down for future reference, capturing Pearl’s murderer, Harry Kamana, red-handed on the moonlit beach – after glimpsing him standing over the body from the bedroom window. Kamana claims to be innocent and the Burroughs launce an investigation of their own, but are they looking for one of her scorned admirers or one of the spies looming ominous in the background like the approaching attack. The solution is well put together and a play on the least-likely-suspect gambit, even though Collins would probably have been accused breaking a cardinal rule of detective fiction if The Pearl Harbor Murders had been published in the 1940s. But then again, those rules were written in Britain and Collins is American. So go figure (I kid, I kid!). This plot is set against the backdrop of an impending war, but only the reader is aware of what’s about to hit them and, coupled with the history of Pearl Harbor, adds an usual tension to the story.

The War of the Worlds (2005) has been my favorite up to this point, in which a murderer turned the table on Orson Welles during the infamous Panic Broadcast and was just fun to read, but now has to share that place with The Pearl Harbor Murders. I really hope this series returns one day. Luckily, I still got two more to go.