Back in 2018, Dean Street Press resurrected another, long out-of-print and forgotten mystery novelist, Arthur E. Ashley, who produced eighteen crime-and detective novels from 1937 to 1959 under his penname of "Francis Vivian" – half of them starring his series-detective, Inspector Gordon Knollis. Vivian's work often straddles the line between the traditional detective story and the then slowly, more character-oriented crime novel with various degrees of success. I wasn't too impressed with The Sleeping Island (1951), a drab, gloomy affair, but The Threefold Cord (1947), The Laughing Dog (1949) and The Singing Masons (1950) were more than deserving of being lifted from obscurity. The Elusive Bowman (1951) distinguished by being one of those very rare, archery-themed mysteries.

I wanted to continue rooting around in the series, but Vivian and Knollis were buried under an avalanche of Christopher Bush and Brian Flynn reprints rolling of the DSP printing press. A return to Vivian has been long overdue and there has been one title, in particular, that caught my attention. 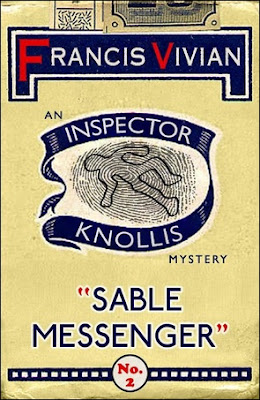 Sable Messenger (1947) is the second entry in the Inspector Knollis series and synopsis promised a detective story along the lines of Bush "a crime with no apparent motive" and "a host of alibis," which has to be broken down, one by one, before the situation can be resolved – except that the story played out very differently than expected. The final chapter is almost a story by itself, but I'm getting ahead of myself.

The story begins with the statement that "if Lesley Dexter had not been a snob her husband might have lived out his three-score-and-ten years." Robert Dexter "wanted to flow easily through life" and enjoy his hobby, collecting Elizabethan poetry and plays, but Lesley had "ideas of advancement by rush methods." She pushed him to study all the subjects that would help him get promoted and began climbing the ladder to become the manager of the Packing Department of the Groots Chemicals Limited. A remarkable accomplish considering his age and size of the company. So they moved from their humble lodgings in Denby Street to Himalaya Villa in River Close. One of the better suburbs where Lesley could play the socialite and get her name in the local paper as being 'among those present' at various functions.

So nothing out of the ordinary, for the English, but, one night, Lesley is keeping Robert awake with her modern poetry and she hears someone knocking on the door of their next door neighbors, the Rawleys. She overhears Margot Rawley directing the midnight visitor to their house and this person gently begins to tap on their front door. Robert goes down stairs to answer the door, but Lesley heard him swear, "oh hell," followed by a thud. And then silence. When Lesley went down to see what happened to her husband, she finds Robert lying on a blood soaked doormat with a knife wound in his chest. The man-in-black with the black velour trilby hat is nowhere to be found.

Inspector Russett, chief of the Burnham Criminal Investigation Department, is immediately sidetracked by the Chief Constable, Sir Wilfrid Burrows, who asks the Yard to immediately dispatch Inspector Gordon Knollis to River Close. Knollis used to hold Russett's position until he solved The Death of Mr. Lomas (1941) and was requisitioned by the Yard, because "the war had justified many unconventional happenings." Now he returns to his old stomping ground with his good natured, intelligent assistant, Sergeant Ellis.

Knollis and Ellis have to cover a lot of ground and collect a ton of puzzle pieces as they attempt to make sense out of a coldblooded murder without the slightest trace of a motive. All though one part of the solution kind of stands out, "it looked all too complicated" and "there were loose ends sticking out at all angles." So, to the reader, Sable Messenger is more of a what-happened and why than a whodunit and you can't help but think the murderer is a complete idiot. As the story progressed, I kept being reminded of that quote from R. Austin Freeman's Dr. John Thorndyke how "the cautious murderer, in his anxiety to make himself secure, does too much" and "it this excess of precaution that leads to detection" – of which Sable Messenger is a textbook example. Such as the cleverly contrived, but insanely risky, alibi-trick. One that never stood a chance when closely scrutinized by the police. If the murderer had simply killed him on his way to work or home and took his wallet, Knollis would have had a very difficult job delivering the murderer to the hangman ("the sable messenger, whose errand knows no mercy").

So, while the bulk of the plot is uneven, the second-half and the last chapter elevated Sable Messenger to a slightly above average mystery novel. Firstly, there's the solution to the presence of the man-in-black and you'll probably crack a smile when you learn what it is. Something you either spot or completely miss. Secondly, the last chapter has a plot (of sorts) of its own when a second crime occurs in River Close. A mysterious man knocking on a front door, but was not seen by the policemen guarding the area and swore no one had entered the close. Yes, an impossible crime that comes with an apparently cast-iron alibi for the culprit. Knollis demolishes the problem almost as quickly as it was presented, but it served its purpose as it made the story, as a whole, suddenly appear much stronger than it actually was.

Sable Messenger is perhaps not the best entry in the series, but the plot has some clever, if sometimes impractical, touches and the last chapter acted as forceful punctuation mark that helped raise up the weaker aspects of the plot. So not the best place to be begin, but, if you already like Vivian and Knollis, you shouldn't ignore it either.