I didn't intend to cram two reviews into as many days, but Dean Street Press released their third set of ten Brian Flynn reprints earlier this week. Since my previous read proved to be a little disappointing, I decided to tack on a review of one of these new editions.

These reprints all come with an introduction by fellow mystery blogger, Steve Barge, who rediscovered Flynn back in 2017 and championed him getting back in print, which happened less than two years later – unearthing a long-lost gem from the 1920s in the process. Steve rightly pointed out in his introduction that one of the joys and strengths of Flynn's writing is "the variety of stories that he was willing to tell." Flynn wrote detective stories, the traditional kind of detective story, but he produced them in all kinds of different shapes and forms. Covering everything from Doylean thrillers to the old-fashioned whodunit. Steve gives as an example The League of Matthias (1934) and The Horn (1934), consecutive releases, which were so different in style you could believe they were from "the pen of different writers." 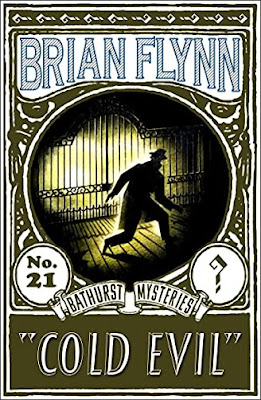 Flynn's variety of plots, divergence in narrative styles and willingness to experiment resulted in a handful pulp-style mystery novels of the kind commonly associated (on this blog) with John Russell Fearn and Gerald Verner.

Somewhat anomalous for a pure, Golden Age writer to indulge in those type of thrilling pulp mysteries, but Flynn was a huge Sherlock Holmes fanboy who wore his fandom on his sleeve. Flynn's pulp-style outings were obvious attempts at reimagining Conan Doyle's "The Adventure of the Devil's Foot" (1910) and "The Adventure of the Lion's Mane" (1926) as modern, fair play detective stories or neo-Victorian thrillers – which happen to be not unlike the pulp mysteries by Fearn and Verner. The big difference is, of course, quality as Flynn was a better writer and plotter who created some weird, but magnificent, creatures by crossing the detective story with the pulp-style thriller. A strange, fluttering of sound is the harbinger of an Invisible Death (1929) in a house under siege. The Triple Bite (1931) is a Doylean thriller in which a ghastly, whirring kind of noise and puffy pink marks on the body the only signs death left behind. The Spiked Lion (1933) concerns a murderer who leaves his victim's bodies a mass of bruised and broken bones with slash marks. I tremendously enjoyed these pulpier outings stuffed with bizarre characters, strange deaths and the occasional impossible crime.

So my attention was drawn to the new reprint of twenty-first entry in the Anthony Bathurst series, Cold Evil (1938), which tackles the possibility of "murder by projection of evil" on a dark, gloomy moor during the winter months.

Cold Evil is narrated by Anthony Bathurst's cousin, Jack Clyst, who the opening chapter finds having dinner at the vicarage of St. Crayle with Martin Burke, Christopher Chinnery, Dick Copeland and Edward Verschoyle. During the after-dinner conversation, someone "drags in the occult and the weird" and when that happens "no other topic will get a show." Martin Burke tells a chilling story about the time he witnessed the chimaera, "a fabled fire-breathing monster," coming to life in a Chinese village and "rush madly down the quaint Eastern street" – crying like a stuck pig. The creature left behind three bodies on the street with "a dull red mark," like a burn, behind each ear. Burke believes they were killed by a projection of evil, because they had offended a local holy man who willed them to die.

When the party breaks up to go home, Chinnery vanishes along the moor and his body is not found until a week later by an old quarry. Chinnery is frozen stiff with "reddish marks" behind his ears, but otherwise not a shred of evidence to suggest he was murdered. Nonetheless, Clyst asks his cousin to come down to St. Crayle to see if he can shed some light on Chinnery's mysterious passing. This is where it becomes apparent that Flynn was playing the waiting game with the story.

Cold Evil takes place between early December and the first two weeks of January during which more people disappear on the moor, while they were on their way home. So there's a lot of waiting with bated breath for the bodies to turn up and discussing everything that has happened or can be expected to happen, which often turns to those cold, dark moors. A place where the bones of ancient Britons have rested for centuries and smiles at you in the summer, but lies in wait to kill unsuspected people in its "cold and callous cruelty" during the winter. Flynn even included a quasi-impossible situation with ghostly footsteps on the moor and a cornered shadow vanishing into nothingness. This added to the atmosphere of a silent, suppressed evil lurking somewhere on those dark, wintry moors in the dead of night.

Regrettably, Cold Evil is a textbook example of past results not guaranteeing future results. Invisible Death, The Triple Bite, The Spiked Lion and The Horn were detective stories masquerading as Victorian-era throwbacks or pulp-style mysteries, but Cold Evil is pure pulp trying to pass itself off as a detective story posing as a Victorian-era pulp. Flynn succeeded in keeping up the pretense until the last two chapters when the story makes a sudden left-turn into Shilling Shocker territory.

You should be able to make an educated guess as to whose hand is behind this "sinister, frightening, eerie business," but the motive, linking the victims together, came out of nowhere and neither can you anticipate the murder method – which definitely belongs on the pages of a dime thriller. So don't expect anything along the lines of Carter Dickson's The Reader is Warned (1939) or even J.J. Connington's Jack-in-the-Box (1944). However, I actually didn't mind this ending as much as you might expect. Flynn always tried to do something different and sometimes that meant he edged away from the traditional elements of the detective story (e.g. The Edge of Terror, 1932). What I did mind is how the ending brushed away all the intriguing clues as insignificant trifles. Those reddish marks? Red herrings. The promising clue of the three light-green hairs? The reader is only told afterwards why it pointed to the murderer without being given an opportunity to spot it yourself. So why even include them?

Cold Evil is an interesting take on the Doylean thriller as the story gives the impression of holding its breath in silent anticipation until everything burst loose in the final chapters. Whether you end up liking it depends on your personal taste or your level of tolerance for pulp fiction, which is not to everyone's liking. Either way, if you're new to the series, I recommend you begin somewhere else first.

Sorry for two lukewarm (DSP) reviews in a row, but I've something excellent lined up for my next review and will return to Flynn sometime later this month. So don't you even dare think about touching that dial!