Last year, the British Library Crime Classics added a twofer volume to their lineup with a brace of John Bude's non-series detective novels, Death Knows No Calendar (1942) and Death in White Pyjamas (1944), of which the former is a locked room mystery that differed in one important aspect from his main series – a tricky plot with substance. The Detective Inspector Meredith novels I've read were well written, but the threadbare, scantily clued plots made them stories about a detective rather than proper detective stories. Death Knows No Calendar told a very different kind of story. So it was about time I got to the second novel in the volume, Death in White Pyjamas. 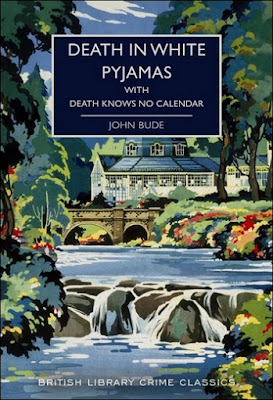 Death in White Pyjamas is in turn very different from Death Knows No Calendar and closely resembles a typical Ngaio Marsh novel with the first half focusing heavily on the characters as the story slowly builds towards the murder. Second half brings in the police to put the pieces together.

Sam Richardson is a successful businessman who amassed "a cool million" out of biscuits, but he grew tired of biscuits and sold his factory to hunt for a fresh stamping grounds. Sam finds what's he looking for when he meets a theatrical producer, Basil Barnes, whose the polar opposite of the friendly, generous and generally all-round nice guy, Sam Richardson. Someone who "could never listen to a hard-up story without putting his hand in his pocket." Basil is "slightly sinister" looking man, who you would expect to produce a revolver when he put his hands in his pocket, but "they paired off perfectly" and he convinces Sam to become a theatrical promoter – buying and converting an old cinema into the Beaumont Theatre. Theatrical background of the characters is another aspect linking Death in White Pyjamas to Marsh.

The members of the Beaumont Theatre playing a central role in the story, beside the promoter and producer, comprises of a grand old character actor, Willy Farnham, who has a chronic gambling addiction ("he'd gamble on anything—cards, billiards, horses, weather, bluebottles or cockroaches"). A "brilliant young ingénue from the provinces," Angela Walsh, who's "a sweet young creature" and made two men loose their heads. Clara Maddison is "the company's most tried and trying actress" as well as the doting aunt of a young and aspiring playwright, Rudolph Millar. Basil pretty much vetoed to put on his play, Pigs in Porcelain. Lastly, there's Deirdre Lehaye, a designer of stage sets, who's an ambitious woman with a mercenary mindset and works mercilessly on building "a four figure reputation." A nice way of saying that she "collected enemies with as much energy as less perverted people collect postage stamps." So a potentially explosive cocktail of clashing personalities and emotions.

Old Knolle is Sam's place on the outskirts of the village of Lambdon and every year, in early summer, he opened "the doors of his castle as a kind of theatrical rest-house for his company." Often the first rehearsals of the next winter season were held at Old Knolle. But this time, the family party atmosphere gradually disappeared underwent a change. 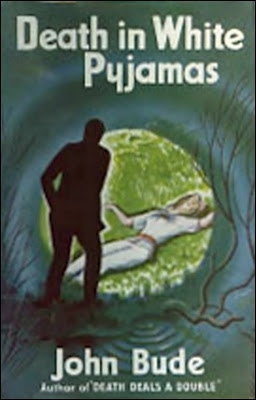 A sizable sum of money is filched from Sam's desk and opens up the thief to a spot of blackmail. Basil and Rudolph both fall in love with Angela, but it's Basil, "a man whose past reputation was something to shudder at, whose future behaviour was something to be dreaded," appears to be the one who's winning her favors – while Deirdre plays her dangerous little games in the background. This culminates when one of them is found dead in the artificial lake of Old Knolle dressed in white satin pyjames, which both baffles and intrigues Inspector Harting and Sergeant Dane.

Kate, of CrossexaminingCrime, noted in her own review that the weakness of Death in White Pyjamas is "the strength of the characterization," which makes it very easy to identity the murderer and motive once the body is discovered. This is also another feature the book has in common with Ngaio Marsh. For example, Marsh's Swing, Brother, Swing (1949) has an excellently written and characterized first half telling you enough about everyone involved to immediately tell who, why and how the moment the murderer strikes. So the second half is undeclared inverted mystery in which you read how the police eventually puts everything together.

Death in White Pyjamas more or less follows the same pattern with one notable difference. The how is not immediately apparent, or fairly clued, but figured it had something to do with that, because a contemporary of Bude used the same gimmick in another 1940s detective novel. It stood out to me. A somewhat crude, but effective, piece of gimmickry that reminded me of E.C.R. Lorac. I actually wonder if Bude took his cues from Lorac and Marsh as it mirrors their work so perfectly and vastly differs from his Meredith novels.

Death in White Pyjamas has a very strong, character-driven first half admirably using characterization as clueing to give the reader more information than the detectives who arrive at scene after the facts, but this begins to work against it in the second, more labored and workmanlike part of the story – which he should have played as howdunit a la John Rhode. Only a lack of clues as to how it was done prevented this. It surely was an interesting read, not a very challenging one, but it was mostly a well done, character-driven mystery. However, if you get this volume, I recommend you begin with the superior of the two novels, Death Knows No Calendar.

On a final, related note: I'm still keeping my fingers crossed for a reprint of Bude's other long out-of-print locked room mystery novel, Death on Paper (1940). Please, BL, help me get one step closer to crossing off every title in Robert Adey's Locked Room Murders (1991) and Brian Skupin Locked Room Murders: Supplement (2019).