Clifford Witting was an English mystery novelist who, somewhat irregularly, wrote sixteen detective novels, published between 1937 and 1964, which have since fallen into obscurity and even most crime fiction reference guides tend to overlook or barely mention him – until recently only a few knowledgeable fans have reviewed Witting online. Nick Fuller commented that Witting is an engrossing writer with "the genuine whodunit pull" and Curt Evans said his novel "typically offers interesting situations, appealing local color and some fine wit." More recently, John Norris and Kate have reviewed a bunch of his novels (here and here). 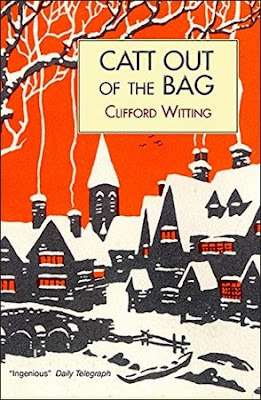 Nevertheless, Witting remained in total obscurity and one of the better-known unknown Golden Age writers who didn't make his way back into print during the current Renaissance Age of reprints, which began in the early 2000s. This suddenly changed last year when Galileo Publishers reissued Witting's Catt Out of the Bag (1939). I believe it's the first time one of Witting's mysteries has appeared in print since the sixties!

Catt Out of the Bag takes place in the small town of Paulsfield during the last weeks of December, 1939, which makes it a seasonal mystery, but the Christmas celebration is used only as a framing device.

John Rutherford is the story's narrator and his wife, Molly, reluctantly accepted an invitation to spend Christmas with family friend, Sybil de Frayne, who's mixed up in every Paulfield social activity and notorious for her never tiring "efforts to involve her friends in the forwarding of her dear expedients" – whose sense of charity began next door. She puts the Rutherfords to good work with the main event being the annual carol-singing in aid of the Cottage Hospital. A round of colds depleted the ranks of the Choral Society and Rutherford has to go out on a dripping wit, misty evening to make "the necessary noise at road junctions and other points of vantage." One of the towns people, Tom Vavasour, has to dart up and down the side streets with the collection box, but they lost him somewhere in One O'Clock Lane.

Vavasour had vanished without a trace and Rutherford decided to turn amateur detective together with another house guest of the De Fraynes, Raymond Cloud-Gledhill.

I've to stop here to mention two things. Firstly, Catt Out of the Bag is listed in Robert Adey's Locked Room Murders (1991) as a disappearance from carol-singing party, but, to use Adey's own words, "the impossible crime element is elusory." So don't expect anything in the way of a genuine impossible crime story. Secondly, despite the presence of a pair of self-styled amateur detective, Catt Out of the Bag unmistakably belongs to the Realist School of R. Austin Freeman and Freeman Wills Crofts.

Just like Crofts, Witting is not exactly showy with his story, or plot, which looks on paper as an unexciting and pretty mundane detective story. Something he perfectly encapsulated in this line, "a sordid chase for a cheating scoundrel who's pilfered a pound of two from a collection-box." Inspector Harry Charlton can't even enter the case until Vavasour has officially been reported missing. So hardly the premise for a classic, complicated Golden Age detective novel, but the quiet, competent detective work (amateur and police) reveals that the plot is constructed around a staple of the Realist School. The breakdown of identity.

Vavasour was a man with no background, who "appeared from nowhere," and left the side of his wife for "weeks at a time to go commercial travelling," but he turns out to have been a man of many names and peeling away these layers of false-identities was the highlight of the plot – as was the impact of these revelations. I also cracked a smile when Vavasour's real name was revealed (minor spoiler, ROT13: Gubznf "Gbz" Pngg). But this is all I can say without giving away too much. It's one of those books best read without knowing too much beyond the premise.

Witting almost went out of his way with Catt Out of the Bag not to stand out too much, but if you like the fairly clued, solidly plotted and unassumingly competent detective novels of Crofts and John Rhode, it's very much worth your attention. And the lighthearted, witty tone of the story makes it everything but a humdrum novel. Recommended for your 2021 December reading list.