Willem Hendrik Haasse was a civil servant in the Dutch East Indies and spend the duration of the Second World War interned in a Japanese prison camp, but, after the occupation ended, briefly returned to his old position – until ill health forced him to return to the Netherlands. Haasse retired in 1950 and began to write detective novels in the Anglo-American tradition at the age of 64! And he produced them at a prodigious rate. 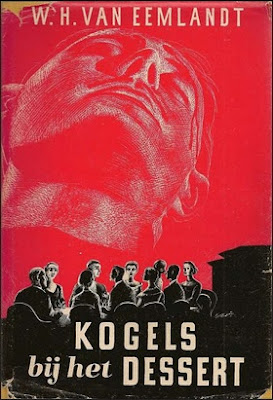 Under the penname of "W.H. van Eemlandt," Haasse penned no less than a dozen detective novels during a three year period, between 1953 and 1955. Four more novels were published posthumously with the last two based on unfinished manuscripts that were completed by Hella Haasse and Joop van den Broek. Hella Haasse was his daughter an an accomplished novelist in her own right, which is why her father adopted a pseudonym. Van den Broek was the author of the first Dutch hardboiled thriller, Parels voor Nadra (Pearls for Nadra, 1953).

I've been aware of Van Eemlandt's Commissioner Arend van Houthem series for years, but, somehow, he never made it to my to-be-read pile until I recently coming across two comments describing Kogels bij het dessert (Dessert with Bullets, 1954) as a variation on the locked room mystery on par with Carter Dickson – which is enough to catch my full attention. A second and closer scrutiny of Van Eemlandt revealed that he was quite an traditionalist, old-school mystery novelist who appeared to have been the Dutch S.S. van Dine or Ellery Queen. But now that I've read Dessert with Bullets, I can only group him with the members of the much maligned British "humdrum" school of Freeman Wills Crofts and John Rhode. Dessert with Bullets particularly reminded me of Victor MacClure's Death Behind the Door (1933) and Raymond Robins' Murder at Bayside (1933). So let's take a look at the plot.

Commissioner Van Houthem, of the Amsterdam police, is invited to a homely dinner with his wife at the home of a respected notary, Mr. Arnold Baerling, who wanted to add the Commissioner of Police to his already interesting list of dinner guests.

Eduard Després is a world traveler, financial speculator and an old friend of Baerling, who's in the country for a few days, which netted him an invitation to the dinner, but he brought along his latest girlfriend, Madame Zadova – who works as a commercial artist in Paris. Evert van Hooghveldt is a young lawyer and a criminology student who's engaged to Baerling's niece, Betty Gertling. Bert Verdoorn is "the writer of extremely exciting detective novels" and is accompanied to the dinner by his wife. Baerling assures Van Houthem they're all good company to spent an evening with, but the conversation during the dinner party quickly goes to murder. And the difference between theory and practice. 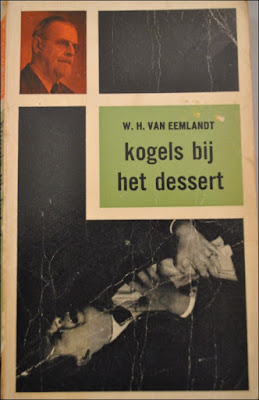 Van Houthem guarantees the table that even "the cleverest writer of detective novels" would find himself neck deep in trouble "when we confront him with reality," because the moment the police arrives on the scene, "the facts are immutably fixed." The image that the investigator sees is real, "even if that reality seems to contain deceptive suggestions." The murderer, unlike a mystery writer, can't go back to alter the facts, or change what he has said, once murder has been done. It's those facts, jumbled as they may be, that will be "scrutinized, disentangled, analyzed and cross referenced with other clues" until "every fiber of the intricate pattern has been examined." So an amateur murderer stands no chance against such an experienced, well-oiled machine as the police, which is an opinion that will be seriously tested that same evening.

After dinner, the table was cleared for coffee and sweets (dessert) and Després offered to get a box of cigars from Baerling's private office, but, as the coffee is poured, two gunshots are heard followed a more muffled noise – as if somewhere a door was slammed shut. Van Houthem needs 10 seconds to get to the office where he finds Després body with two very neat bullet wounds in his forehead and the balcony door had been forced open. So, on first sight, it appears as if Després surprised a burglar who was taking a crack at the office safe, but this hypothesis collapsed when all of the known facts are considered. And what emerges is somewhat of an impossible crime.

Firstly, the balcony door had been forced when it was unlocked and the murderer didn't have enough time, between firing the shots and Van Houthem's arrival, to collect the shell casings and disappear, which is only 10-15 seconds. Secondly, the shots, according to medical examiner, "had been fired with near supernatural precision" and that murderer must have had "a perfectly steady hand," because the shots were aimed at exactly the same point. Only reason why there were two bullet holes, instead of one with two bullets, is that Després was walking when he was shot.

Van Eemlandt once said that "I expect intelligence from my readers" and he respected it here by acknowledging the machine-like nature of the shooting, but the possible presence of a deadly gadget only makes the murder even more of possibility. Such a device would have needed to be mounted onto something, which should have visible left traces, but none were found. What happened to it right after the shooting, because the murderer had no opportunity to dispose of it. Nearly everyone was alibied by Van Houthem with exception of Verdoorn, who was on the toilet with indigestion, but he could only have gotten rid of the gun, or a device, by eating it or flushing it – neither of which is the case. So here we have a murder in an unlocked room that time and opportunity turned into a tightly sealed room.

Van Houthem's investigation runs along two different tracks: working out the exact circumstances of the shooting and sorting out the sordid past of the villainous victim, which furnishes the plot with a classic motive. This is done in the slow, methodical pace of the humdrum school in which every inch and possibility of the case is closely examined and tested. I know the humdrum school is not popular with everyone (Hi, Kate), but, if you're more interested in the intellectual machinations of the detective rather than his private life, or personal music taste, you'll enjoy being able to observe the inner-workings of Van Houthem's mind as he struggles with the problem. A 220-page mental catch-as-catch-can wrestling match between common sense and the lying truth. 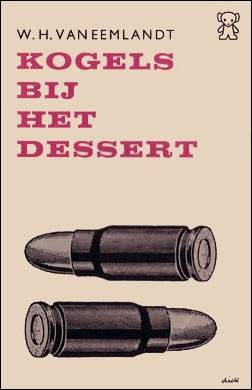 Interestingly, the first and second chapter immediately suggest an obvious solution, but a solution that makes no sense on account of the apparent randomness of the shooting. For example, the murderer couldn't possibly have known it would be Després who went into the office to get the cigars, but who would want to kill Baerling? So the lion's share of the investigation is done in clearing up this picture and the effect was very pleasing with the highlight being the answer why the room had to be physically unlocked. Van Houthem acknowledged that the murder could have been presented as a classic locked room scenario with all the doors and windows locked on the inside, but there was a very sound reason why the murderer didn't do this.

So, yes, the murderer is obvious from the beginning with the plot hinging on getting a clear picture of what exactly happened, why it happened, and how to prove it. You'll find the same approach in MacClure, Rhode and Robins.

But even with the murderer standing out, I half-suspected the mystery writer, Verdoorn, who could have used a homemade, double-barreled, revolver (no shell casings) that he disassembled on the toilet and disguised the loose parts as "pocket litter" – such as pens, a lighter, matchbox, etc. Some of the small parts could even be mixed with the coins in his wallet. The actual locked room-trick, of the unlocked room, is perhaps a little contentious in nature. Van Eemlandt didn't cheat and fairly clued the solution, but, stylistically, I can see why some readers might feel cheated and cry foul. And other readers simply don't like this type of locked room-trick.

Either way, I personally liked Dessert with Bullets as an original, but tricky, take on both the locked room mystery and the British humdrum school, which makes it all the better that it was penned by a Dutchman. I can't help but feel proud whenever I come across a Dutch detective novel that can stand with its American-Anglo counterparts. So you can expect Van Eemlandt to make a return to this blog sometime in the near future. I already have Moord met muziek (Murder with Music, 1954) on the big pile and have my eyes on Arabeske in purper (Arabesque in purple, 1953), Dood in schemer (Death at Dusk, 1954), Zwarte kunst (Black Art, 1955) and Duister duel (Dark Duel, 1955).
Geplaatst door TomCat on 10/21/2020