A Thing of the Past

"Outside the window, so close to the pane that it seemed to be pressing against it, was a white face—a chalk-white face, whether man or woman none could tell."
- Annie Haynes (The House in Charlton Crescent, 1926)

In my previous blog-post, I reviewed an archaeologically-themed mystery novel, Arthur Rees' The Shrieking Pit (1919), which left me in the mood for a similar sort of detective story, but there were only two such titles on my shelves that had not been previously discussed on this blog – namely R. Austin Freeman's The Penrose Mystery (1936) and Agatha Christie's Murder in Mesopotamia (1936). Logically, I should've gone with the former, because it has been wasting away on my TBR-pile for ages, but settled for the latter. So, yes, this is the second re-read this month. 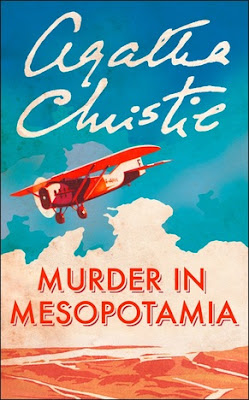 Murder in Mesopotamia is fourteenth novel about Christie's most popular and enduring creation, Hercule Poirot, which also happened to be part of a sub-category, called "Poirot Abroad," that includes some of the Belgian detective's most celebrated cases – such as Murder on the Orient Express (1934), Death on the Nile (1937) and Evil Under the Sun (1941). The books and short stories from this sub-category take place between the countries of continental Europe (e.g. Murder on the Links, 1923) and the sun-drenched Middle East (e.g. Appointment with Death, 1938).

Christie's second husband, Max Mallowan, was a prominent British archaeologist and she spend many years helping her husband with pulling the remnants of past civilizations from the earth of the Middle East. So you can easily see how this region became the backdrop for so many of her stories, but there are only two that used an excavation site as the scene of a crime: an early short story, entitled "The Adventure of the Egyptian Tomb," collected in Poirot Investigates (1924) and Murder in Mesopotamia. A pity, really, because archaeological settings are criminally underutilized in detective stories. Anyhow...

Murder in Mesopotamia takes place during an archaeological dig near Hassanieh, "a day and a half's journey from Baghdad," situated in present-day Iraq and was at the time of the story a young, independent kingdom – having been granted full independence from British rule in 1932. However, the presence of a British policeman, Captain Maitland, suggests the story took place when the region was still a protectorate of the British Empire.

The story at hand is narrated by a nurse, named Amy Leatheran, who has been engaged by a well-known archaeologist, Dr. Erich Leidner, to keep a weary eye on his wife. Louise Leidner is a beautiful, charming and intelligent woman, but Leatheran quickly comes to the conclusion that she's also "the sort of woman who could easily make enemies." Lately, she seems to be genuinely afraid of someone.

During the Great War of 1914-18, Louise was married to a German, Frederick Bosner, who she discovered to be "a spy in German pay." She had a hand in the arrest and he was to be a shot as a spy, but escaped and was, reportedly, later killed in a train wreck. However, she started to receive threatening signed by her late husband. So did her husband escape death a second time? Or is his younger sibling, who idolized his older brother, plotting revenge? In any case, two days after her marriage to Dr. Leidner she received a death threat ("You have got to die"). Several additional letters arrived, recently they even had an Iraqi stamp, but the most disturbing ones announce "death is coming very soon" and "I have arrived." She even saw "a dead face," grinning against a window pane, which only she saw.

So not everyone takes her completely serious and Leatheran even suspects Louise might have been sending those threatening letters herself, but the situations becomes as serious as the grave when Dr. Leidner stumbles across Louise's body in her bedroom – struck down by "a terrific blow on the front of the head."

Coincidentally, the world-renowned private-detective, Hercule Poirot, is passing through the region after "disentangling some military scandal in Syria" and is basically given full control of the investigation by Captain Maitland. Something for the curious-minded: Poirot's experience in this case is what inspired the famous quote from Death on the Nile that compared detective work with an archaeological dig. Poirot does something like that here: removing all of the dirt and extraneous matter surrounding the problem, and small cast of characters, until the truth clearly emerges from all of the facts, questions and personality of the victim. As one of the characters observed at the end, Poirot has "the gift of recreating the past" and would have made a great archaeologist.

Interestingly, Poirot's explanation reveals that the book, all along, was an impossible crime story.

One of the two reasons for re-reading Murder in Mesopotamia is the archaeological angle, but also for the fact that Robert Adey listed it in Locked Room Murders (1991). However, the claim of the book being a locked room mystery seems shaky at first, because the bedroom was neither locked from the inside nor under constant observation from the outside. It's established that nobody from outside of the large house could have committed the murder, but there was a window of ten minutes when nobody was in the courtyard to observe anyone entering, or leaving, the only door that opened into Louise's bedroom – which would make this a closed circle of suspects situation. There is, however, a very good reason why it would still qualify as an impossible crime novel.

I recently posted a comment on a blog-post on The Reader is Warned, titled "The Case of the Impossible Alibi," in which I gave my (poorly typed) opinion under what strenuous conditions an apparent cast-iron alibi can be considered an impossibility. I think Murder in Mesopotamia meets those qualifications and the explanation as to how the murderer pulled of the killing could've been used to create a full-fledged locked room scenario. So I filed this review under "locked room mysteries" and "impossible crimes." 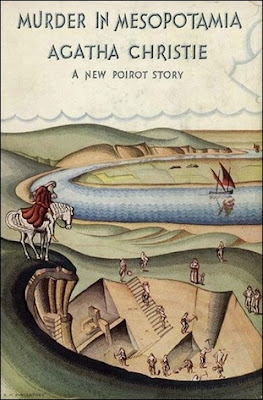 However, I would recommend not to read my comment on that blog-post unless you've read the book.

I should point out something that's often overlooked or ignored: a second, gruesome murder occurs towards the end when a colleague of Dr. Leidner, one Anne Johnson, swallows "a quantity of corrosive acid" and burns to dead from the inside, but when she lies dying she gives, what's known as, a dying message – one that gives away a huge clue about the method of the first murder. And that gives a huge hint about the identity of the killer.

So, all in all, Murder in Mesopotamia has all the ingredients for a top-tier Agatha Christie novel, but the plot has one very black mark against it. You can only accept the solution, if you accept that Louise Leidner was a very dense, unobservant and low-conscience person. And there was an attempt to foreshadow the fact that she could have missed the keypoint of the plot. However, it's was confirmed that she was actually an intelligent woman. So this single point makes the solution, as a whole, hard to digest and condemns the book to the rank of mid-tier Christie.

I was actually reminded of Ellery Queen's The American Gun Mystery (1933), which came inches from being a first-class detective story and a classic title from the early EQ period, but then came the mind-numbing explanation for the vanishing gun – which was impossible to swallow. The American Gun Mystery and Murder in Mesopotamia are actually the same in that regard, because that single point makes the whole explanation a tad-bit implausible.

Regardless, it was still a well written and interesting mystery novel, but simply not in the same league as Murder on the Orient Express, Death on the Nile and Evil Under the Sun.

Well, that ended on a less than enthusiastic note. Anyway, not sure what I'll dig up next, but I'll continue my futile attempt to reduce the mass of my semi-sentient TBR-pile.
Geplaatst door TomCat on 3/22/2017