"...we are a truthful family, only the things that happen to us are so peculiar that nobody ever believes in them. Still, I expect you've got a sort of winnowing ear for people's testimonies and will know in a flash if we try any hanky-panky."
- Henry Lamprey (Ngaio Marsh's Death of a Peer, 1941)

Ten Star Clues (1941) is the fifteenth novel with the emblem "A Bobby Owen Mystery" plastered on its cover, but the writing and plot is as elaborate, darkly humorous and fantastical as E.R. Punshon's earlier work in this series – which consists here of one long riff on the Victorian-era case of the Tichborne claimant.

It's also one of the most scrupulously plotted stories from the series and has a carefully constructed, decidedly linear narrative. 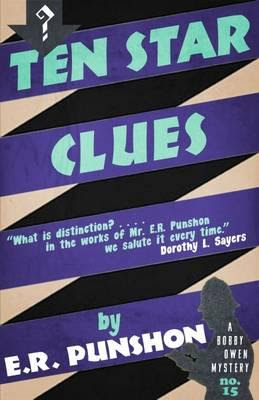 In the first quarter of book, Punshon introduces a cast of old-fashioned characters populating the historical Castle Wych, which is situated near the village of Brimsbury Wych.

The elderly Earl and Countess Wych stand at the head of the old Hoyle dynasty, who "for some hundreds of years had lived and flourished at Castle Wych," and own most, but "less now than formerly," of the surrounding land. However, since the days of robber barons and lucrative placeholder, running a centuries-old estate has become an unprofitable occupation. Ralph Hoyle is the heir to his great-uncle and had decided to dispose of the estate once he inherits the title, but a problem presents itself when a long-lost grandson of the Earl turns up on their doorstep.

Bertram Hoyle was presumed to have passed away a decade ago in the United States, but Earl and Countess Wych recognize and accept him as their grandson – securely placing him in the position of heir apparent. However, the Earl and Countess seem to be only family members who buy the story. But nobody appears willing to challenge the claim. Well, nobody except Ralph, who blatantly opposes the claim and calls his so-called cousin a fraud, which makes for an increasingly tense situation.

It makes for an uncomfortable and tense situation. A situation that becomes tense enough for someone to unload several cartridges from an automatic pistol in the library (where else?), but the identity of the victim is not as obvious you might expect.

Enter Inspector Bobby Owen and Chief Constable Glynne: who conduct a series of laborious interviews with the family, servants and several interested parties from the outside – such as one of the family lawyers and the local vicar. I have to mention here that the structure of the plot reminded me of a Ngaio Marsh's method of plotting, which often had a lead-up to the murder followed by a series of interviews by Inspector Roderick Alleyn. That's pretty much where the relevant comparisons ends, but I always associated this particular sequence with Marsh's mystery novels. 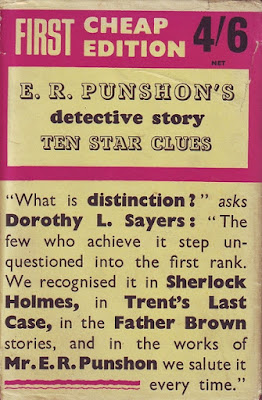 Anyhow, the interviews of the "people concerned were themselves all so striking and unusual in their different ways" and uncovers "a complicated interplay of characters and interests" – which allows Owen to compile two very important lists.

The first is a tabulation of "the Possibles," which consists of a nice and ordered list of suspects, motives and several pertinent questions, but it's the second list that'll be of main interest to most readers. A list of ten clues that Owen dubbed "star" clues and should help the reader with identifying the murderer. However, I should mention here that seasoned, experienced mystery readers and addicts will probably identify the murderer early on and work out the main lines of the plot long before coming across the list of clues. I immediately thought "what's this person up to" and "did this person just..." when the shots were fired, but that's hardly something that can be held against Punshon and shouldn't take anything away from this beautifully plotted Golden Age mystery.

Well, I know this review has been rather summary, but it's a difficult book to review in depth. I did not want to give away too much about the lead-up to the murder investigation and the second half consisted of a series of interviews, which do not lend themselves to the writing of descriptive, enticing reviews. That's why this review is both poor in details and writing.

So, I'll end this review by pointing out one of the aspects that attracts me to Punshon's work, which is what some view as a weakness in his work: namely his verbiage. Punshon was a very wordy writer, but it never annoyed me because expertly constructed plots and well-rounded characters accompanied it. It also gave the stories a strong sense of time-and place that stretched across the centuries. I simply appreciate it when there's a short, throwaway sentence that explained that a certain room in the castle had not witnessed a high-strung scene "since the early eighteenth century when a duel had been fought in it by candlelight." Or a character noting how his "remote, skin-clad ancestors would have felt so much more at home" in the surrounding, out-stretched forest than "he could ever be." That comes on top of the references World War I and the coming World War, which is in this book in the stages known as the Phony War.

As I said before, it gives the book a strong sense of time-and place, which I appreciate as much as a well constructed plot or a clever locked room mystery. Punshon never seems to disappoint in combining the first two (no locked rooms though) and that's why is becoming a personal favorite mine.

Well, I'll try to pick a mystery for my next read that'll allow me to drawl on with a bit more substance.