Christopher St. John Sprigg's untimely death as a casualty of the Spanish Civil War hurled his modest, but often inspired, high-quality, contribution to the detective genre into obscurity with secondhand copies becoming scarce, expensive collectibles – until the 2010s rolled around. The British Library Crime Classics released a new edition of Death of an Airman (1935) in 2015, but it would take another three years before the floodgates were fully opened. Bruin Books followed suit with The Corpse with the Sunburned Face (1935), Valancourt republished The Six Queer Things (1937) and Black Heath brought back Crime in Kensington (1933) and Death of a Queen (1935) in 2018. Moonstone Press completed the reprints with their brand new edition of the long out-of-print The Perfect Alibi (1933) in 2019. A very fine, if scattered, collection of reprints that were among the highlights of 2018 and 2019. 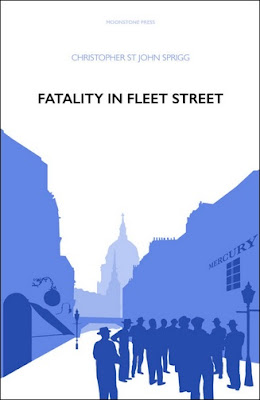 So that left only Sprigg's second detective novel, Fatality in Fleet Street (1933), on the big pile. A detective novel with all the appearance of a conventional, British mystery typical for the period, but the finer details of the story and setting makes it one of the oddest of the early thirties.

Nick Fuller, of the Grandest Game in the World, called it "technically science fiction" as Fatality in Fleet Street takes place in the future of 1938, but history has turned it into an alternate reality mystery akin to Theodore Roscoe's I'll Grind Their Bones (1939). Lord Carpenter, Governing Director of Affiliated Publications, the biggest newspaper group in the world, who "decided that Russia must be crushed." He reasoned, "Russia's first genuinely favourable trade balance with an unpegged exchange" made "her, for the first time, a real menace to the established order of things" determined "that this country, striking up through India, should be the executioner" – a clash that must come sooner or later. So why not strike "when we are strong and Russia militarily negligible."

Lord Carpenter has become aware of an incident known neither to the Foreign Office nor Fleet Street. An incident in the Soviet Union which he intends to use to "bring the Empire to the boil" in "such a way that war will be inevitable." So, as to be expected, there's some opposition to his plan from the Prime Minister and the main artery of his newspaper empire, the Daily Mercury. Lord Carpenter points to an ornate dagger on the wall and tells them, "if you gentlemen were to jump on me simultaneously and cut my throat with that, you would be able – perhaps – to upset my plans. Aside from that unlikely conjunction, War is as inevitable tomorrow as the dawn." Well, someone plunges that very dagger into the newspaper tycoon while he took a nap in his office. Charles Venables, the crime expert of the Mercury, investigates the case on behalf of the newspaper, which immediately places him in the cross hairs of Detective Inspector Manciple. Venables is not above suspicion himself and he does precious little to dissipate the cloud of suspicion around him as deliberately confuses the trail with a "fabulously mysterious air."

I seriously considered Venables as a viable suspect for a time and suspected he deliberately created a false trail of breadcrumbs to his doorstep, which he then could demolish during his trial and secure a "Not Guilty" verdict. A game of high-stake bluff poker that would not be entirely out-of-character for someone like Venables, but that hypothesis crumbled to dust halfway through and the ending went in a different direction than I first thought. But first, there are a few things from the investigation that stood out and deserve to be highlighted. 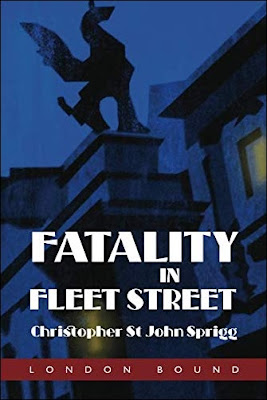 Firstly, Venables stumbles on a Communist group of agitators, which is not too surprising considering Sprigg was a Marxist, but Fatality in Fleet Street was published shortly before his political conversion and the portrayal of Communist group is surprisingly satirical – almost like a bunch of cartoon villains. Very different from The Corpse with the Sunburned Face published only two years later. Secondly, Venables is assisted in his dealings with the Communists by Lee Kum Tong, the Mercury's Oriental expert, who pleasantly reminded me of Katoh from C. Daly King's The Complete Curious Mr. Tarrant (2003). A massively underrated character and the type of characters outsiders would not expect to find in a American or British detective stories from the 1930s. Thirdly, I tried to spot any clues and hints about this alternate reality with the most blatant one being the line, "Stalin and his like had given place to rulers gentler in political methods." And that helped to tone down the hot war Lord Carpenter tried to start with Russia to a "bloodless war" of trade. Yes, you read that right. Sprigg predicated the Cold War in 1933! Well, sort of. I also found it interesting there were was no mention of Hitler or the Nazis goosestepping all over Europe. E.R. Punshon's Crossword Mystery (1934) and Darwin L. Teilhet's The Talking Sparrow Murders (1934) were very prescient in that regard, but it could suggest Hitler in this universe never rose to power, got assassinated successfully or simply didn't survive the First World War. It should be mentioned that with a huge, world consuming European war off the table and much more amiable Cold War, the 2022 of Venables reality would look radically different from our 2022.

Back to the story. Detective Inspector Manciple progresses enough to eventually make his arrest and the accused is put on trial with the last quarter of the story becoming somewhat of a courtroom farce. Particularly towards the end as Venables instructs the defense to throw out the rule book at the last minute to pull some Perry Mason-like courtroom shenanigans. You can't help but feel a little sorry for the inspector when you learn to what extend his investigation had been sabotaged. Unfortunately, I agree with Nick that the solution "lacks oomph." A good and interesting solution showcasing the promise Sprigg had as a plotter at the time, but it didn't land like it should have. And learning what was withheld until that dramatic courtroom scene, while necessary, helped rob the ending of its punch. Another contributing factor is the length of the story, which went on longer in parts than could be justified and a little trimming would have benefited the overall plot. I think one aspect of the solution should have been left up to the reader to decide. The judge at the trial said "this case is unique" and that would have justified a slightly ambiguous, open ending that nonetheless left nothing unexplained... except for that one detail.

Enough nitpicking for one review! As noted above, Fatality in Fleet Street is a finely-done showcase of Sprigg's potential as a writer and versatility as a plotter, but Fatality in Fleet Street is a clear case of concept over execution – something he would improve upon in his last handful of novels. So read it as a well written, fascinating curiosity from a writer who would go on to write minor gems like Death of a Queen and The Six Queer Things, before his life was cut short in battle.