Back in 2020, the British Library Crime Classics reprinted The Woman in the Wardrobe (1951), originally published as by "Peter Anthony," which is the shared penname of two brothers, Anthony and Peter Shaffer – who garnered fame as playwrights, screenwriters and novelists. The Woman in the Wardrobe was together with How Doth the Little Crocodile? (1952) and Withered Murder (1955) three of their long out-of-print, nigh impossible to find (locked room) mysteries that attained near-mythical status among fans. So, when the British Library republished The Woman in the Wardrobe, I kept my fingers crossed for 2021 reprint of Withered Murder. As of this writing, no further reprints have materialized. I decided to take a look at two of their short stories instead, which were a lot easier to track down. 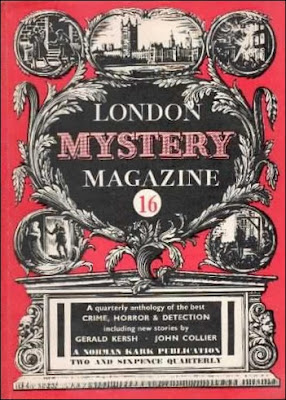 Peter Anthony's "Before and After" originally appeared in The London Mystery Magazine (No. 16) in 1953 and is the only short story to feature their series-detective, Mr. Verity. This story has a reference to The Woman in the Wardrobe, "Oh lord! Not another locked room. My last locked-room case was a shattering business... all centering round some dreadful woman in a wardrobe." The impossible murder in "Before and After" concerns the mysterious death of a wheelchair-bound woman.

Mrs. Carmichael had been paralyzed from the waist down for the past fifteen years and "now a tiny hole, drilled neatly through her right temple, had made the top half of her body as immobile as the lower half." At the time of the murder, the whole family comprising of the victim's husband, daughter, brother and one of her nurses were having dinner and playing bridge at Colonel Longford's house – an hours drive away from the Carmichael home. So nobody could have taken "an unnoticed hour off" to drive back to commit a murder. Besides, "the excellent Nurse Wimple was on duty in the passage outside Mrs Carmichael's room the whole night" and nobody went in, or out, of the room until the murder was discovered.

Inspector Swallow is advised to take a certain Mr. Verity, who happened to be in the neighborhood, along to the crime scene. Mr. Verity is a Great Detective likely modeled on John Dickson Carr's Dr. Gideon Fell and Sir Henry Merrivale, but as tactless as Leo Bruce's Sgt. Beef and as fallible as Anthony Berkeley's Roger Sheringham. So "really a remarkable man" whose services Inspector Swallow can't neglect to use, but Mr. Verity has "an infuriating habit of tendering them unasked" anyway. Mr. Verity constructs a pretty decent solution to the seemingly impossible murder around a burn mark on Mrs. Carmichael's right, nicotine stained finger and a photograph of her in the morning's copy of the Daily Grind ("Before and After Taking Toneup, the wonderful restorative for Invalids..."). Not as original a locked room-trick as the one that can be found in The Woman in the Wardrobe, but a very well done, classically-styled piece of locked room shenanigans. No problem with it, whatsoever, but The London Mystery Magazine published a short addendum to the story, "Part II: Mr Verity's Investigation," in the next issue credited to "J.M. Caffyn." This addendum takes a sledgehammer to the locked room, the solution and Mr. Verity's status as a Great Detective.

I was tempted to describe "Before and After" and "Part II: Mr Verity's Investigation" as a two-act variation on Bruce's Case for Three Detectives (1936), but the deconstruction in Part II is so thoroughly it can only be compared to Ulf Durling's Gammal ost (Hard Cheese, 1971). So definitely prefer Mr. Verity's solution.

Peter Shaffer's "Suffer a Witch" was published in The London Mystery Magazine (No. 20) in 1954 and had no idea what to expect as it could be everything from a modern, gritty crime story, a simple whodunit or a little-known locked room mystery – having escaped the roving eyes of Robert Adey and Brian Skupin. However, I didn't expect to find a delightful and curious mix of malice and mischief with a dash of witchcraft. Miss Annie Ames lives in "a little conical house on a hill" with "only a tomcat for company" and "a grandmother, at fifteen removes, who had been burned to cinders in a market place" as a witch. That makes Miss Ames a figure of fun in the nearby village. So, one day, Miss Ames takes her revenge and together with her cat, Jonah, begins to dabble in the black arts of her ancestor ("Jonah darling, shall we make them afraid?"). Miss Ames "feverishly began making little images of all the people in the village who had ever tormented or made fun of her." She even appeared in the village to buy a broomstick, but that broomstick provides the story with a curious, sadly premature, ending to the story.

The ending strongly suggests "Suffer a Witch" is a witches tale of the supernatural and unexplained, but, to me, it read like a fascinating prologue to a potentially great, never finished impossible crime novel. I mean, the ending poses a never-seen before impossible situation (ROT13: n sylvat jvgpu jub znxrf n sngny penfu ynaqvat ba ure oebbzfgvpx). It should be grist on the mills of locked room specialists like James Scott Byrnside and Paul Halter! So a pretty good, fun and entertaining story that could perhaps have been the premise of a fantastic, novel-length locked room and impossible crime mystery.

Speaking of locked rooms and impossible crimes, there's an extremely obscure one coming up next that has been out-of-print and sought after for nearly a century!