I promised in my review of Jerry Coleman's Action Comics story, "The Super-Key to Fort Superman" (1958), that I would done with trimming down my stack of newly acquired locked room mystery and impossible crime novels by the end of the month – bringing back a little variety to the blog. This post marks the end of the deluge of locked room and impossible crime reviews that have flooded this place since February. 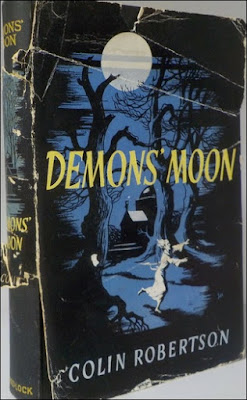 I've already lined up some non-impossible crime novels by Christopher Bush, Moray Dalton and E.R. Punshon, but my to-be-read pile and wishlist remain infested with locked room stories. So expect that variety to be heavily seasoned with miraculous murders and insoluble problems. But for now, I bring you a curiosity that has been hermetically sealed in obscurity for nearly seven decades.

You have genuine rarities such as Eric Aldhouse's The Crime at the Quay Inn (1934), B.C. Black's The Draughtsman's Pen (1948), Nigel Brent's The Leopard Died Too (1957) and Sinclair Gluck's intriguing, somewhat familiar, sounding Sea Shroud (1934) in which a murder is committed in a locked and bolted room with barred windows – one window has "a hole from a rifle shot" in it. When it comes to the oddities, you have the previously mentioned "The Super-Key to Fort Superman" and Stephan M. Arleaux's plagiarized edition (The Locked Study Murder, 2017) of A.A. Milne's The Red House Mystery (1922). There's even some odd praise for David Louis Marsh's Dead Box (2004), an atrocity on the level of the living conditions in the trenches of the First World War, but Skupin admitted "the solution is a terrible letdown." So there's that. And there were a couple of entries that looked anomalous.

Skupin spotlighted Maisie Birmingham's The Mountain by Night (1997) in his introduction as a 1990s locked room novel "worthy of note" and was published only twenty-three years ago, but there are less than a dozen references to it on the internet. No copies! Something tells me The Mountain by Night was privately published, because she published her three previous mysteries in the 1970s and Amazon gives "M.P. Birmingham" as the publisher of The Mountain by Night – explaining the lack of copies. So perhaps an interesting title for John Pugmire, of Locked Room International, to reprint in the future as a companion for Derek Smith's Come to Paddington Fair (1997). Esther Fonseca's The Thirteenth Bed in the Ballroom (1937) is another weird one, reportedly reprinted in 2012, but only found a short review and have to assume the 2012 edition belonged to another entry. Christopher Fowler has a number of entries on the opposite page.

Lastly, we have the subject of today's rambling review. A locked room mystery novel from the early 1950s that, at first, didn't appear to exist at all! 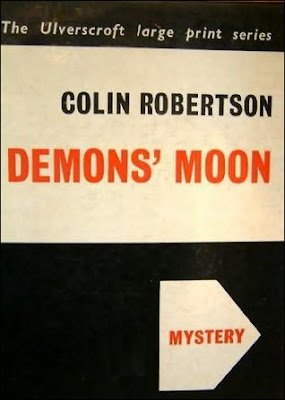 Entry #2955 in Locked Room Murders: Supplement is Colin Robertson's Demon's Roost, published by Forge in 2004, but this time the internet came up with zero results. The book was not mentioned, or listed, anywhere on the internet and that would have made for a record-setting death plunge into obscurity, but noticed that Demon's Roost was the last entry on page 160 and Madeleine Robins' Petty Treason (2004) was the first title listed on the next page. Yes, it was published by Forge. So that cleared up that problem, but what about the title? Some detective work brought me to the profile page of a prolific, British mystery novelist, Colin Robertson, who wrote detective, pulp and thriller novels under several different names – one of the novels published under his own name is titled Demons' Moon (1951). I focused on that title and discovered that the names of the detectives listed in Locked Room Murders: Supplement were the same as in Demons' Moon. Never underestimate the tenacity and laser-focused autism of a rabid fanboy! :)

So, after all that detective work, I wanted to know what the book was about and the description of the impossibility, "a dead man seen in a room through the keyhole" and "only moments later the body is gone," had me intrigued. What I found was a little out of the ordinary for a locked room mystery.

Demons' Moon begins with a sickly, middle-aged spinster, Rowena Penhaven, who lost her domineering mother six months ago and now lives all alone behind "the grey, moss-covered walls of the Penhaven estate." Beechwood Close even has the family crypt cozily standing on its uninviting, fenced-in grounds. Rowena was "bound hand and foot" to "her tartar of a mother" as an unpaid servant, but the death of Mrs. Penhaven snapped the chains of her mind and she began to suffer from lapses of memory and hallucinations – seeing ghosts, snakes and the Thing. Every so often, the key to her mother's old bedroom goes missing and when she looks through the key-hole, the Thing is always there. A "macabre tableau" of a man lying on a bloodstained carpet with "a hideous, gaping wound in the back of his head" and "an ugly stain" on the front of his shirt. Scene is always the same!

Eventually, the key is returned and when Rowena goes into the bedroom, the dead man has "vanished without leaving a trace." Only to reappear in the locked bedroom days, or weeks, later. And this has been going on for months! 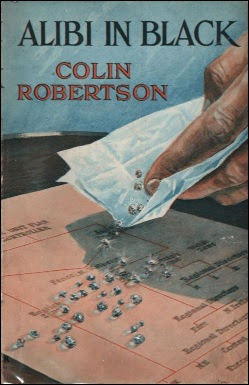 So, during one of her lucid moments, Rowena decides to call in outside help and picked a detective agency from the telephone directory, but the detective who answered the call, David MacLeod, found a crazy woman coming out of the family crypt. Rowena is rambling about a ghost "wearing a shroud" and "things in the house." But there's no ghost. No blood. No body in the bedroom. MacLeod promises to come back the next day, but reads in the morning newspaper that the body of Rowena Penhaven had been pulled from a small stream running through the estate. She had died shortly after he had left her behind!

Unfortunately, he needs a client before he can make himself "a thorough nuisance" without risking his license and one unexpectedly comes to him with a hundred a week paycheck. Sadie MacLeod soon joins her husband on his investigation.

You can't deny Demons' Moon has a solid premise. A tale of domestic suspense, in the style of Anthony Gilbert, with a strong, Gothic flavor and the problem of the ghostly scenes in the locked bedroom, but the second and third act of the story convinced me Robertson had no idea where the story would end when he penned the opening chapters – making it up as he went along. Second part of the story is pure, pulp-style dime thriller with a scheming villain who keeps cobra's as pets and idiotically wastes his time with drugging or playing games with MacLeod. Just not as good or engaging as the pulp detective/thriller yarns by, oh let's say, Gerald Verner (e.g. Terror Tower, 1935). Robertson than attempted to walk back on this second act with a horrendously botched play on the least-likely-suspect gambit, but the twist only pulled the rug from under the plot and the whole story fell flat on its face. So not a pretty ending to a story that began so promising!

Honestly, the only good things I can say about Demons' Moon is the original, strangely compelling way in which MacLeod was brought into the case and Robertson updated a locked room-trick that was famously used in a short story from the 1930s. Sadly, the problem of the locked room is not given any thought until Chapter XXIV when briefly a number of possibilities are considered and eliminated ("...and can't believe that a dummy was used either"). And they accidentally stumble across the solution in Chapter XXVI. You say about John Russell Fearn what you want, but he would have wrested a good pulp story out of this locked room-trick. A detective story that would have given the reader a hint of the possibilities of this new marvel.

So, yeah, Demons' Moon is a good example why some novels and writers are forgotten today, but, every once in a while, you have to read one to appreciate the truly talented and entertaining mystery writers all over again.
Geplaatst door TomCat on 3/29/2020