They Never Checked Out

"You're all too busy sticking your noses into every corner, poking about for things to complain about, aren't you? Well let me tell you something - this is exactly how Nazi Germany started!"
- Basil (Fawlty Towers, Episode: Waldorf Salad, 1979)

One year ago, I posted a review of Anita Blackmon's There is No Return (1938), who wrote over a thousand short stories for such publications as Love Story Magazine, Detective Tales and Weird Tales, but only published two full-length mystery novels during her lifetime – which were highly regarded by the eminent crime-fiction critic, Howard Haycraft. Nevertheless, they swiftly faded from popular memory and were completely forgotten about once their author passed away in 1943. 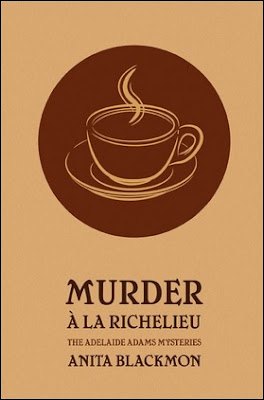 Back in 2010, Curt Evans began to blog about Blackmon's long-forgotten mystery novels and have since then reappeared in print as both paperback editions and e-books.

Murder à la Richelieu (1937) was the first of only two novels about Blackmon's short-lived series-character, Miss Adelaide Adams, who has a "crusty disposition" and has been referred to as "a nosy old maid," but she has a good and even generous heart – snappy as she may be at times. Miss Adams also has a traceable sense of humor and this makes her narrative a dark, grim and bloody parody of the "Had-I-But-Known" crime stories of Mary Roberts Rinehart and Dorothy Cameron Disney.

The Richelieu is a quiet, respectable residential hotel in a southern town in the United States (Curt suggested Little Rock, Arkansan) and has its own social hierarchy consisting of several layers. One of them are the resident guests, or "the old guard," who make up the inner circle of hotel-life and rarely allow outsiders (i.e. temporary guests) to be admitted to their closed group – prompting the observation that it was easier "to enter the Kingdom of Heaven" than "to be admitted among the elect at the Richelieu Hotel." A third layer consists of the people working at the hotel, such as the waitresses and the droopy-eyed night clerk, but they're not socially involved with either group of guests.

So pretty much what you would expect from a place where human beings congregate for an extended period of time. It's like a pass-through village.

Recently, Miss Adams, who is described herself as "a close student of the human comedy," began to notice slight disturbances in the regular interactions between the people at the hotel. Even though she failed to foresee the significance of her mislaid spectacle case.
Anyway, she did noticed the hostile attitude of Kathleen Adair towards James Reid, of New Orleans, when he happened to step inside an elevator with her clumsy, scatter-brained mother. She also noticed how the niece of respectable widow and hotel guest, Polly Lawson, who, "practically overnight," began to behave in the most reckless manner – which came at the cost of her budding relationship with a promising young man, Howard Warren. So now Polly is flirting with a carefree, traveling salesman, Stephen Lansing, who loves to tease Miss Adams. Lansing also took a young wife, Lottie Mosby, on a whirlwind ride. She has a husband who has taken to drinking and she gambles away their money on the race track in the hope of hitting it big.

Finally, there's a professional gold-digger, Hilda Anthony, who had come to the town to make use of their new state law to procure a legal separation from her fourth husband. But why did she stick around in the small, quiet conservative town once she secured the divorce. After all, the town is not exactly rich in "gilded playboys." 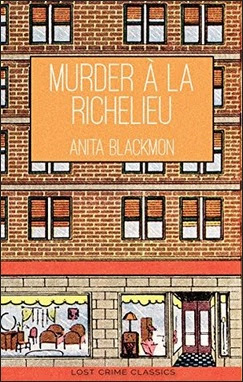 Once again, you should probably expect entangled relationships, emotions and problems even in a small community such as a residential hotel, but when that community becomes the backdrop of a string of gruesome murders they might harbor a potential motive for a killer.

The first victim is found when Miss Adams entered her darkened suite and discovers the body of one of her fellow guests, namely James Reid, who is hanging by his suspenders from the cross-arm of a chandelier. Someone had slit his throat from ear to ear!

One observation that has to be made is that all of the murders are particular grisly and graphic in nature, which you would expect to see in a slasher movie from the 1980s. But here you have a murderer who choked the second victim to death and tossed her body out of a top-floor window to an ugly mess on the pavement below, while the third victim had her neck violently broken and biting acid poured over her face! A fourth murder by throat-cutting is revealed during the killer's feverish confession in the penultimate chapter of the book.

However, the grisly killings are not the only dark and disturbing aspects of Murder à la Richelieu, because the plot slowly reveals that the hotel was used for a particular kind of crime rarely, if ever, associated with detective novels of this vintage – making the book somewhat of an original and standout title within the genre. On top of that, the plot is serviceable enough and managed to be complex without becoming a horribly mangled mess of plot-threads. Blackmon nicely tied every plot-thread together to form a logical pattern and only the murderer's identity proved to be a slight letdown. You can say the hints to this person's guilt were present in the background, but they were a trifle weak and the revelation of this person, as the deranged killer, was a little underwhelming.

In any case, Murder à la Richelieu is a splendid compound of grisly murders, dark motives and rampant blackmail, which is told from the perspective of a delightful narrator who you can't help but like in spite of her crusty personality and imperfections. Miss Adams alone makes you wish Blackmon had continued the series pass the two titles she left behind, but she also knew how to write and was not entirely inept when it came to handling an intricate, multi-layered plot.

So, in closing, I would rank the book only slightly below the two best hotel-set detective stories ever written: Harriet Rutland's Bleeding Hooks (1940) and Cornell Woolrich's novella "The Room With Something Wrong" (collected in Death Locked In, 1994).
Geplaatst door TomCat on 7/16/2017