Risen from the Grave

"All I shall beg leave to murmur, gently, is: rubbish. You cannot mix the two worlds like that. This was a human crime, planned by a human being."
- Dr. Gideon Fell (John Dickson Carr's "The Black Minute," collected in The Dead Sleep Lightly, 1983)

Anita Blackmon was an American schoolteacher who turned to fiction and penned over a thousand short stories for the periodicals of her day, which included such publications as Love Story Magazine, Detective Tales and Weird Tales, but she was also the author of two highly regarded mystery novels – i.e. Murder à la Richelieu (1937) and There is No Return (1938). 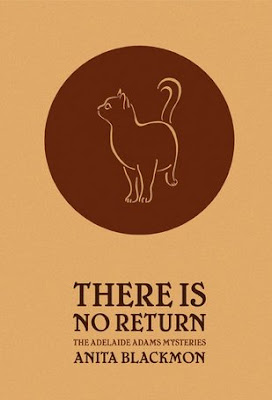 One of the genre's eminent critics, Howard Haycraft, listed Blackmon as one of the premier writers from the Had-I-But-Known, often shortened to HIBK, school of mystery fiction, which was founded by Mary Roberts Rinehart. After she passed away in 1943, Blackmon's work dropped out of the public consciousness. She seemed to be destined for obscurity, but, as the saying goes, the internet never forgets and some prominent connoisseurs of murders, like Curt Evans, started writing about her – which resulted in her work being reissued. Now there are several different editions available of her two mystery novels.

Murder à la Richelieu is regarded by Evans as the better of those two novels and perhaps the most logical point of departure, but I decided to start with the second and last book from this short-lived series – because the description of the plot suggested something along the lines of Carter Dickson and Hake Talbot. There were promises of ghostly possessions, fake spiritualism and a gruesome killing during a séance. Well, I was not entirely disappointed about what I got.

There is No Return was alternatively published as The Riddle of the Dead Cats and has Blackmon's series character and narrator, Adelaide Adams, coming to the aid of an old friend, Ella Trotter, who found herself in a "macabre and sinister tangle at Mount Lebeau."

Lebeau Inn is a mountain resort in the Ozarks, located on Mount Lebeau, which is the highest spot between the Cumberlands and the Rockies, but the place "had gone steadily gone to seed." It was in a far-flung, difficult to reach corner of Arkansas and this largely contributed to its decline. So it was inevitably that the shabby-looking, tumbledown place fell into the hands of the bank and this brought one of their stockholders to the inn, Mrs. Trotter. Adelaide knows her friend is probably doing everything in her power to drum up business, but, recently, events were unfolding at the inn that made her reflect that if she had "foreseen the train of horrible events" she would have "left Ella to lay her own ghosts" – which is in the best tradition of the HIBK-school.

Mrs. Trotter tells Adelaide how several cats had been found dead, "cut all to pieces with a sharp knife" and "left to die like that in agony," which is unsettling enough, but the cat-killings coincided with a series of séances and an apparent case of possession.

The séances are conducted by professor Thaddeus Matthews, a self-professed spiritualist, but Mrs. Trotter calls him "a fraud of the cheapest rank" and impresses Adelaide as a vaudeville-type charlatan, but, regardless, he has one firm believer. Don Canby is the wife of a wealthy business magnate, Thomas Canby, who suffered a terrible lost when their daughter, Gloria, took her own life. Gloria was not a very balanced person and her father wanted to put her in an institution, which is assumed to have been her motive for suicide. And it is said that "suicides cannot rest in their graves."

Gloria's ghost seems to be very present and not only as a voice in the medium’s head, playing a game of twenty questions, but manifests herself by possessing the body of Matthew’s stooge, Sheila Kelly – who is a dead ringer for the dead girl. A resemblance that grows stronger whenever she lapses into one of her trances. Or when she found a dead canary in her bedroom, because Gloria had "a mania for wringing their necks." 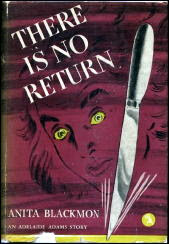 Even for a stooge, Kelly seems to be absolutely frightened about being possessed and this aspect of the story is turned into a persecution plot-thread, which turned out to be somewhat reminiscent of the pall of suspicion that hang over Fay Seton in John Dickson Carr's He Who Whispers (1946). Seton was accused of both a murder and acts of vampirism, while Kelley is looked at as if she acted as a vessel for a vengeful spirit and one of the characters remarked how she "should have been buried with a stake in your heart to pin you down forever." This plot-thread began to unwind in the wake of a gruesome death: one of the guests had his throat slit when the lights went out during a séance and the sheriff has her confined to her room as the prime suspect.

Regardless of this measure, the inn continues to be plagued by misfortunes, death and the ghost Gloria. The pontoon bridge is washed away, which isolated them on the mountaintop, while two more people get their throat cut open or stabbed in the heart.

All of this makes for a dark, atmospheric novel of mystery and suspense, which does justice to the largely empty, worn-out hotel that's used as a backdrop. You can easily imagine a knife-wielding killer rubbing shoulders with malevolent ghosts in the squalid corridors of the Lebeau Inn. On top of that you have the wonderful, snappy narrative voice of Adelaide Adams, which makes me want to pick up Murder à la Richelieu one of these days. The plot was also pretty fair: the murderer and motive were logical, but the clues pointing to this explanation were a bit scarce. Nevertheless, they were present in the story and there's one clue, if you spot it, that points straight at the murderer. So this definitely a fair-play mystery.


However, I do have one or two minor complaints about the overall plot: after the premise of the plot was presented, the story became slightly repetitive and the second half of the story used everything from the first half. I'm not sure if that makes any sense, but the best way I can describe is by saying that all of the creativity and ideas were in the first half of the book. Secondly, I did not like the hypnotic-angle of the story. That's not a spoiler. It revealed shortly after the murder this may've played a part in the murder, but that’s pretty much the only bad part of the plot.

Otherwise, There is No Return is a splendidly dark tale of murder, suspense and fake spiritualism, which gave a Carrian touch to a classic Had-I-But-Known mystery novel. There are some slight imperfections in the plot, but these smudges hardly deteriorate the overall quality of the book.

On a final note, it looks as if I've a genuine, old-fashioned classic from the Golden Age for my next read, but the review of that book might be preceded by a filler-post. Because I had not done one of those in ages.