Between the Devil and the Deep Blue Sea

"I'm here on Mars for a specific purpose... there's the job of bringing you to justice."
- Dillon Stover (Manly Wade Wellman's Devil's Planet, 1942)

"Robin Forsythe" was born Robert Forsythe in 1879 in Sialkot, British India (present-day Pakistan), as the eldest son of a distinguished cavalryman and seemed to be destined for an uneventful, but respectable, existence – while a nurturing his childhood dream of living by his pen as a fiction writer. A normally disastrous, life ruining encounter with the long-arm of the law inadvertently placed Forsythe in a position that turned that dream into reality.

In 1927, Scotland Yard conducted an undercover operation at Somerset House and carried out "intensive police laboratory examination of hundreds of suspect documents," which resulted in the arrest of Forsythe and several co-conspirators. Over a year-and-a-half period, they earned 50,000 pounds from the illicit sales of high value judicature stamps. Stamps that were removed from documents that had their cancellation marks obliterated with acid. 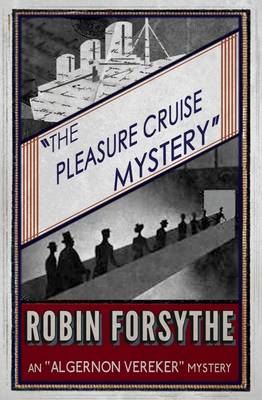 It was a clever scheme that at the time evoked comparisons with the tales of Sir Arthur Conan Doyle's Sherlock Holmes and our very own genre historian, Curt Evans, likened "the fraudulent enterprise" to "something out of the imaginative crime fiction" of the "post Golden Age lawyer-turned-author Michael Gilbert," but the lucrative venture ended with a fifteen-month prison sentence – during which Forsythe began to make serious work of his unfulfilled dream of being a writer. Forsythe's release from prison coincided with the publication of his first mystery novel: Missing or Murdered (1929).

Between 1929 and 1937, Forsythe penned and published eight mystery novels: five of were part of the Algernon Vereker series and the remaining three were standalone novels. The books were well received upon publication and drew favorable comments from a number of Golden Age luminaries, but slowly drifted into obscurity after their author passed away in 1937, which is a mistake that's now being rectified by the indispensable Dean Street Press and Curt Evans – who're doing a stellar job at filling the void that the Rue Morgue Press left behind!

I initially wanted to read The Spirit Murder Mystery (1936), but that particular title was not yet available for purchase. So I settled for my second choice, The Pleasure Cruise Mystery (1933), because ocean-bound detective stories have the tendency to be pretty good. I was not wrong in this instance.

The Pleasure Cruise Mystery begins with Manuel Ricardo, a high-spirited member of "the noble army of artists in prose fiction," convincing his friend, Anthony "Algernon" Vereker, to accompany him on a pleasure cruise aboard the Green Star Company’s luxury liner "Mars." Vereker is a gentleman-artist with a growing reputation as an amateur detective, but critics slated his "last atrocity" and suffered some "bad luck in the Armadale murder," which offers up a picture of an educated, but fallible, character. A picture that also begs to be compared with E.C. Bentley's Philip Trent and Anthony Berkeley's Roger Sheringham.

Ricardo is convinced that immersion "in the joyous inanities of a charming social life," during a pleasure cruise, is the easiest and quickest way for Vereker to bounce back from his recent spade of bad performances, but the very epithet of pleasure makes him recoil and prefers the company of a good book and a cigar. Vereker ends up retreating to his cabin in the company of a copy of Professor Dorsey's Why We Behave Like Human Beings (1925) when voices begin to emanate from the next-door cabin, which utter such suspicious things as "you'll have to do the job as soon as possible" and "consider the awful risks" – suggesting that something unlawful might be afoot. A suggestion that seems to be confirmed when Ricardo stumbles over the body of Mrs. Mesado on D deck.

Mrs. Mesado is the wife of an Argentinean meatpacking millionaire, Guillermo Mesado, but they had "a bit of a rumpus some weeks ago" and she "decided to console herself with a cruise." She brought along her sister, Constance, and her brother-in-law, Richard Colvin, who knew she was suffering from heart disease and knew "she might have a fatal seizure at any moment." There are, however, suspicious elements concerning the sudden death of Mrs. Mesado: the hands beneath "a pair of chamois leather gloves" were cut and bruised. A necklace, described as "a rope of alternate cinnamon and white diamonds," went missing and one with flashing blue and white stones turned up in an unexpected place.

I'm afraid I can't reveal too much about the plot, because the story has a sparsely populated dramatis personae, which gave the book some restrictions, but Forsythe hammered a scintillating and original detective story from those limitations. It's a fresh, original and audacious treatment of a classic plot-device that offered a satisfying explanation for the cut and bruised hands of the victim, the cause of death and the exact time when life went extinct.

However, the most admirable part of the plot is probably the nature of the crime that makes it truly comparable to Agatha Christie's Death on the Nile (1937): namely a scheme that’s perfect in theory, but fell apart when put into practice by the Merrivalean "blinkin' awful cussedness of things in general" – which is something I always appreciate. In my opinion, it's the best approach to make even most labyrinthine plots believable, because the complexities arise from a perfectly conceived plan going awry.

I only have one point of criticism, namely the time Forsythe took in unveiling that explanation, which began to reek of padding after a while. Once he lifted a tip of the veil, revealing the true nature of the crime, he should have yanked off the whole sheet, but he continued to try to baffle his audience to the last possible moment. It's something to be appreciated, sure, but also cheapened the overall effect of the revelation.

Anyhow, I think Forsythe made an excellent decision in exchanging real-life crime for fictional ones and I'll be sure to return to his work before long. I've read positive reactions about The Polo Ground Mystery (1932) and The Ginger Cat Mystery (1935) sounds enticing. So expect more Forsythe and Vereker in the near future, but for my next read I'll be dipping into a SF-mystery. Stay glued to that screen!
Geplaatst door TomCat on 1/07/2016