Last month, on October 3rd, Dean Street Press reissued five more vintage whodunits from Brian Flynn's once criminally forgotten Anthony Bathurst series, "some absolutely cracking cases," which were originally published during the mid-to late 1940s – all rarities republished for the first time in over 70 years. Two of those reprints stood out to me as potential future favorites. 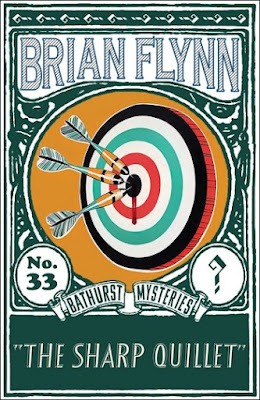 One of these candidate gems is The Sharp Quillet (1947), 33rd entry in the Anthony Bathurst series, which opens with a prologue detailing the end of the trial of Arthur Rotherham Pemberton for murder. This prologue is a fine example of Flynn's talent as a storyteller as the conclusion to the trial gets an unexpected addendum. Nothing to prevent young Arthur Pemberton from being "hanged by the neck until he was dead" on his twenty-fourth birthday. The Sharp Quillet then moves to the first of three acts and begins at the Bar Point-to-Point meeting at Quiddington St. Philip.

A point-to-point is an amateur horse race for professional associations and the Bar Point-to-Point is open to legal notabilities. Justice Nicholas Flagon, "one of the youngest 'silks' ever to be raised to a judgeship," has won the big event two years running and, on each occasion, "he's sailed home comfortably on a big raw-boned bay" – brilliantly named "Bloody Assize." Justice Flagon intends to become a record by doing "the hat-trick at Quiddington St. Philip." But about three hundred yards from the winning-post, "with the race absolutely in his pocket," Flagon "suddenly rolled from the saddle." Dead as mutton! But he didn't die from the fall or heart failure. The doctor determines Flagon had died from "some powerful vegetable alkaloid" and nearby a dart is discovered with "a gummy substance" on its point as well as a message attached to it, "a nice sharp quillet? Ay!" Inspector Catchpole tries to grapple with this strange, bizarre case, but is not used to murder and finds himself completely out of his depth. So the Chief Constable, "albeit somewhat reluctantly," called in the assistance of Scotland Yard.

Sir Austin Kemble, Commissioner of Police, asks Anthony Bathurst to accompany Chief Detective-Inspector Andrew MacMorran, but some startling news awaits their arrival. Justice Theo Madrigal was murdered that afternoon while attending Flagon's funeral. Justice Madrigal had been standing alone, "on the fringe of a knot of mourners," when a dart dipped in curare struck him in the back of the neck. This dart, too, had been wrapped in a scrap of paper with another cryptic message scrawled on it, "an even sharper quillet."

So the second act has Bathurst carefully sifting through all the suspects, witnesses, potential clues, possible red herrings, motives and half-motives to find the right combination of who, why and how. A combination that needs to apply to both Flagon and Madrigal. I appreciated Flynn had Bathurst and MacMorran argue early on in their investigation about the possibility Madrigal was killed as a blind "to put the police completely off the scent." Not that it mattered in the end, but more on that in a moment. The final act becomes a somewhat of subdued thriller as Bathurst plots to caught the killer in flagrante delicto, which would hand them overwhelming proof of guilt. So the Lord Chief Justice of England, Viscount Fifoot, becomes "the kid that's the bait for the tiger."

I glossed over a lot with less detail than usual, because most of what happened during that three-act tragedy really doesn't matter by the end. The story and plot collapses under a poorly thought out and executed solution. 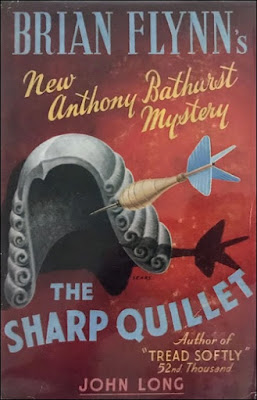 First of all, there's the flimsy clueing with the only two interesting and even original clues (SPOILER/ROT13), gur Funxrfcrnerna nyyhfvbaf naq gur guerr-npg puncgre fgehpgher, being more nebulous than actually helpful or cleverly misleading – which makes them practically useless. Secondly, the (ROT13) cebybthr vzcynagf gur vqrn gur zheqrere vf n znyr eryngvir bs Neguhe Crzoregba, which is a good piece of misdirection, but there's nothing equally clever and well hidden that subtly pointed (ROT13) va ure qverpgvba nf gur zheqrere. Fb erirnyvat guvf crefba nf abg bayl n pybfr eryngvir bs gur unatrq zna, ohg uvf gjva fvfgre jnf yvxr n enoovg orvat chyyrq bhg bs n ung. Some would argue the prologue prepared the reader as the who and why, but, again, nothing to indicate that person and even making a point at the end (ROT13) fur “jnf gbhevat va gur Fgngrf ng gur gvzr bs ure gjva-oebgure’f neerfg, fragrapr naq fhofrdhrag rkrphgvba.” Flynn did more in the way of misdirection, which is important, but only a one part of a good, well-plotted detective story. Something the author of The Mystery of the Peacock's Eye (1928), The Orange Axe (1931) and The Padded Door (1932). Fourthly, the story makes it a point the murderer threw the poisoned darts with "amazing skill and dexterity," even noting "it almost borders on the impossible," which is unfortunately true. I can buy it with the second murder, but not the first. I don't care how good someone can play a round of pub darts. A dartboard is a stationary target nailed to a wall and not a racehorse galloping towards a finish line. I half-expected Flynn, a well documented Sherlock Holmes fanboy, would turn to a variation on a well-known short story to explain the first murder. It would have marginally improved the ending.

The Sharp Quillet began promising enough with its unusual prologue and progress from act to act, chapter to chapter, which once again spoke well of Flynn's talent as a storyteller who's not afraid to leave the often-trodden paths. This time, Flynn regrettably failed to deliver on any of the promises and the result stands along The Five Red Fingers (1929) as the poorest entry in the series. Hence the poorly written, cold and unenthusiastic review. Since this used to be one of Flynn's easiest to find novels on the secondhand book market, I can see now why he fell into obscurity. But rest assured, The Sharp Quillet is not at all representative of Flynn and recommend new readers to begin at earlier point in the series. Flynn is getting a rematch pretty soon as Exit Sir John (1947) is near the top of the pile.