So Great a Distance: "The Riddle of the Whirling Lights" (1935) by Stuart Palmer

Last year, Crippen & Landru published a sequel to one of the best collections of "Lost Classics," Stuart Palmer's Hildegarde Withers: Uncollected Riddles (2002), which gathered ten, previously uncollected, short stories under a promising title, Hildegarde Withers: Final Riddles? (2021) – as there are still a dozen stories out there. Buried somewhere in obscure magazines and newspapers.

Hildegarde Withers: Final Riddles? collected short stories from the 1950s and '60s period, which clearly showed Palmer tried to adept to the changing times as his short stories put more emphasis on characterization and storytelling. So very different in tone and structure from the shimmering, intricately-plotted 1930s short stories collected in Hildegarde Withers: Uncollected Riddles. There were some excellent stories in that last collection, "Where Angels Fear to Tread" (1951), "You Bet Your Life" (1957) and "Who is Sylvia?" (1961), but Palmer's thirties short stories stand among the finest pieces of American detective fiction written during the genre's golden years. Why do those 1930s stories persist in being so thoroughly forgotten or overlooked? 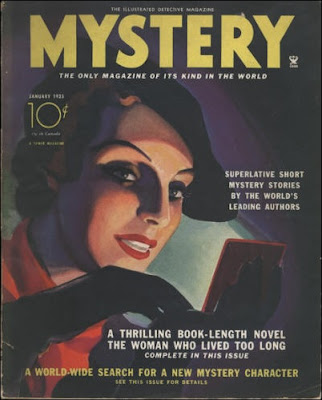 Palmer's "The Riddle of the Whirling Lights," originally published in the January, 1935, issue of Mystery, takes place in the Windy City during a cold, blowy Chicago December – where the planetarium becomes the scene of a chance encounter. Tony Lassiter and Avis Le Glare are strangers who find themselves stranded between trains to New York on the icy steps of the Adler Planetarium and Astronomical Museum. So they decide to "be bored together" and plunk themselves down in the middle of the fourth row, of the big planetarium room, to watch the magic and mystery of the sky as the entire firmament of heaven sprang forth upon the domed ceiling. Tony noticed Avis was leaning against him and put his arm around her ("what else was darkness and starlight for?"), but her head "rolled limply and horribly on his shoulder." Something "warm and sticky ebbing from the back of her neck." She had been stabbed with one half of a pair of scissors, which was found beneath a row of seats in the front of the hall.

So the police arrest Tony on the spot as "nobody could have stabbed her without climbing over the feet of the nice old ladies in the row behind them" unless "the killer wore wings or had arms ten feet long." Why would he kill a woman he known for less than an hour or two?

Fortunately, Miss Hildegarde Withers happened to be in Chicago and receives a telegram from Inspector Oscar Piper, in New York City, to investigate the murder at the Chicago planetarium ("PARENTS AUTHORIZE ANY EXPENSE"). Miss Withers presents herself to the District Attorney with a silver badge ("purely honorary") and is allowed to provide some unofficial assistance, but D.A. sees very little hope as the case appears to be "open and shut." But what about the scattered clues? The murder weapon and victim's handbag were discovered in different places around the planetarium. What happened to the second scissor blade? Miss Withers is presented with four witnesses, or rather suspects, who were questioned and searched without result. It takes more work than usually in a short story, before Miss Withers can exclaim, "eureka," but evidence is lacking. Miss Withers sets a trap for the murderer with herself, "a meddling busybody," as bait.

A note for the curious: a quick search showed I mentioned “The Riddle of the Whirling Lights” twice before in my reviews of Moray Dalton's The Art School Murders (1943) and John Russell Fearn's One Remained Seated (1946). So it's really embarrassing I blanked on it when compiling the updated list of favorite locked room mysteries. I'm still not going to update that monstrosity until at least 2026.