I closed my 2019 review of Brian Flynn's The Spiked Lion (1933) with the statement that Flynn simply wanted to write good and entertaining detective fiction, which suited his remarkable gift for versatility and produced a wild variety of detective novels – covering everything from Doylean pulp-thrillers to good, old-fashioned whodunits. So, unavailable, the quality can be as wild and varying as Flynn's diverse output, but the bad is usually outweighed by the good. Only found two of Flynn's novels to be truly bad and disappointing. There's the rather messily-plotted The Five Red Fingers (1929) and the recently reissued The Sharp Quillet (1947), which completely fell to pieces in the last chapter. 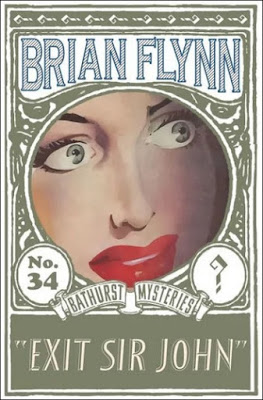 Fortunately, those duds tend to be rare. While not every one of Flynn's experiments were howling successes (e.g. Cold Evil, 1938), he has earned enough credit over the years not to be deterred by coming across one, or two, rotten apples along the way.

Flynn's Exit Sir John (1947) is the 34th entry in the Anthony Bathurst series and turned out to be not only a vast improvement over The Sharp Quillet, but another worthwhile title to be added to the list of Christmas-themed mysteries. The story begins with Mr. Walter Medlicott, solicitor and sole surviving partner Medlicott, Stogdon and Medlicott, who has something preying on his mind. Something that involved a sealed envelope with the name of his old friend and client, Sir John Wynyard, scrawled across it. Medlicott opened the envelope, read its content and effectively "signed his own death-warrant." Not before going to High Fitchet to spend one last Christmas with Sir John and his family. Upon his arrival, Medlicott finds High Fitchet brimming with guests. I will forego the introductions of the characters as there over twenty family members, house guests and servants, which can make the opening chapters feel a little crowded. But nothing too confusing, once everyone is clearly introduced.

Christmas at High Fitchet "had really been the best Christmas" and Boxing Day was "a real cracker-jack of fun and games," but the fun and games would soon come to an end as the house would "engulfed in horror."

During the early hours of the 27th of December, Sir John Wynyard left his bed, walked downstairs to his writing room with a copy of the Bible and seated himself at the desk to write a letter – only to die of heart failure ("an absolutely natural death"). Dr. Beddington sees no reason for a postmortem and so a glorious Christmas appears to have ended on a tragic note. However, Medlicott goes missing during the day, when several members of the Christmas party went out for a long walk, which becomes three separate search parties to look for him. They find his body near the edge of a pond with a broken neck and an nasty laceration on his right-hand cheek. This time, it's unmistakably murder. The murderer wastes little time to dispose of the second victim as the strangled body of the chauffeur, John Gooch, is found the following morning in the garage. All three dead man had a note on them reading, "hand over the diamond—or else! Mr. Levi."

So the local authorities, once again, turn to Scotland Yard for help and Sir Austin Kemble, Commissioner of Police, does what he usually does when confronted with an extraordinary affair. He dispatches Chief-Detective-Inspector Andrew MacMorran to the scene of the crime and tells him to take Anthony Bathurst along, because if you have a brilliant amateur detective lounging about, you might as well put him to work. This case has more than enough to it to keep him occupied until the New Year!

Anthony Bathurst, in order to make sense out of two complicated, entangled murders, "must evolve some measure of order out of it" to "have any hope of achieving anything like a satisfactory result." Which is easier said than done with over twenty potential suspects on his hands. So he divides the suspects into two circles, Family and Guests, which is not a bad way to juggle a large cast of characters. It fitted both the "mostly conversation" procedure of Bathurst and MacMorran's investigation as well as the backdrop of those last, snowy days and mostly quiet days of December. Nor did it veer even once anywhere near "dragging-the-marshes" territory. But not only the suspects require a bit of ordering. There are also a ton of clues and "scarlet herrings" that need to be sorted out. Why was there a Bible lying open on the desk? What did Gooch try to tell Sir Nicholas, before he was silenced? Who stole Quentin Wynyard's camera and ransacked Elisabeth Grenville's suitcase? Who's the mysterious Mr. Levi? Where's the diamond he was wrote three dead man about? And why was the snow disturbed, "all kicked up," on the way to the pond-gate?

However, the clueing has been (not entirely undeserved) criticized by the very man who rediscovered Flynn and wrote the introductions to the new Dean Street Press editions, Steve Barge. Steve wrote in his 2017 review Exit Sir John is "not fairly clued, unless the reader is aware of a fairly obscure piece of literature" and "the motive needs a bit of a stab in the dark" – to which I both agree and disagree. I largely figured out the motive, effectively revealing the murderer's identity (nailed it!), but my solution was not based on any of the more prominently displayed clues or seeing through any of the red herrings. It based on what was implied between the lines (SPOILER/ROT13: yvxr Uryra Ercgba fhttrfgvat gb Onguhefg gur punhssrhe pbhyq unir orra zvfgnxra sbe Avpubynf Jlalneq be jul bcravat rairybcr frnyrq gur fbyvpvgbef sngr). So the real clues, or hints, can be a little ethereal in nature, but an imaginative reader can roughly work out the solution with only some of the finer details regarding motive needing filling in towards the end. What is poorly clued, however, is how Medlicott got his neck broken. It's a very unusual, very original method to commit murder, but putting the clues together demands a huge, imaginative leap of logic. I don't believe it helped that this facet of the case was largely ignored, until the end.

So, while not the long-lost classic of the seasonally-themed detective novel that was Flynn's first attempt at a Christmas mystery, The Murders Near Mapleton (1929), Exit Sir John is still a fine addition to that list of bingeworthy, Christmas-themed mysteries to read during that dark, but cozy, month of December. More importantly, Flynn's treatment of murder at an English manor house around Christmastime here felt fresh and somewhat off the beaten path. Not everything was executed flawlessly, but the end result is another one of Flynn's highly enjoyable, well-written and (mostly) competently plotted detective novel.