Appleby's Other Story (1974) by Michael Innes

J.I.M. Stewart was an Oxford don and a professor of English literature who, under the name of "Michael Innes," wrote close to fifty mystery novels and a passel of short stories from 1936 to 1986, which gave Appleby and the Ospreys (1986) the honor of being the last detective story to be published by a big name from the genre's Golden Age – published two full years after Gladys Mitchell's last book (The Crozier Pharaohs, 1984). So he outlived all of his contemporaries and was among the first to be brought back in print during the early 2000s. 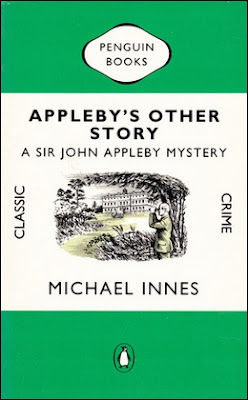 Amazingly, I have only read a handful of mostly his earlier mysteries, such as Death at the President's Lodging (1936), Hamlet, Revenge! (1937) and Lament for a Maker (1938), while having a whole bunch of them on my shelves. So I decided to finally return to this series and randomly picked a title. You can say I hit the bulls-eye with my pick.

Appleby's Other Story (1974) is a late entry in the series, however, the story is excellent with a well put together plot and one hell of an alibi-trick!

This story begins when Sir John Appleby, retired Chief Commissioner of the Metropolitan Police, accompanies Colonel Pride, Chief Constable, to the lofty abode of Maurice Typherton. Elvedon Court lies "confidently aloof" behind a spreading lawn with two stories superimposed upon "a heavily rusticated ground floor" and the basement level had been dug deep into the ground – giving the effect of "the Perfect Cube." Two years ago, "a number of not-all-that important pictures" disappeared from the place and Typherton wanted to consult Appleby, who's "the country's acknowledged authority on art robberies," but, when they arrive at Elvedon Court, there are police cars parked outside. Maurice Typherton was shot dead following a house party.

Initially, Appleby had no inclination to get involved, but then he recognizes one of the house guests, Egon Raffaello, who's an art-dealer of ill-repute and the conversation he has with this old acquaintance convinces to get involved. A tête-à-tête interrupted by the Prodigal son, Mark Typherton, who returned home in secrecy. And now practically inherits the entire estate. Appleby begins to wander the hallways of Elvedon Courts and interviews all of the suspects.

So the story largely consists of a series of conversations and this is somewhat reminiscent of Ngiao Marsh, but this didn't result in, what is known as, "Dragging the Marsh." More importantly, Innes actually managed to achieve a very unusual effect through these wanderings and conversations.

Nick Fuller correctly observed in his review that the story has "a sense of time-warp." During the interviews, Appleby uncovers that Elvedon Court is a homely, cozier incarnation of Sodom and Gomorra with a lot bed-hopping. There's a reference to loud pop-music coming from "a domestic juke-box" during the house party and one of the characters acknowledge the story place "in the nineteen-seventies," but this makes for a weird contrast with the classical, country-house setting and ingenious plot – giving you the idea a cast of modern-day characters were transported to a 1930s country house mystery. And the alibi-trick is everything you'd expect from a great thirties detective novel.

The alibi-trick can be qualified as a quasi-impossible crime and could have been dreamed up by John Dickson Carr or Paul Halter. A particular technique, or misdirection, was used here that could have easily been used for a locked room mystery. You could argue it came close enough here to label it as one, but promised in my previous post that this would be a non-impossible crime review. But, as you can see, I can't seem to escape from those

I think this one was close enough that some would probably label it as one, but promised in my previous review that this would be a non-impossible crime review and this was part of the reason why I returned to Innes. But, as you can see, I can't seem to escape from them.

Well, this is all that can really be said about the book. Appleby's Other Story is a relatively short, conversational-style mystery novel, but has a pleasantly unusual, slightly surreal atmosphere with a plot worthy of the best from the past. A necessary reminder that Innes was better than I remember him and will try to return to him sooner rather than later. Probably with Appleby and the Ospreys.
Geplaatst door TomCat on 10/25/2018