In Days Gone By

"Has it ever struck you... that the majority of these so-called and self-styled grown-ups behave very, very much worse, more stupidly, more selfishly, than they would ever expect children to behave?"
- Mrs. Bradley (Gladys Mitchell's Tom Brown's Body, 1949)

Late, Late in the Evening (1976) was the fiftieth novel in Gladys Mitchell's voluminous Mrs. Bradley series, which lasted from 1929 to 1984, and to mark the momentous occasion Mitchell returned to an earlier point in the books – when Dame Beatrice was still Mrs. Bradley. One of the characters mentions that, "many years later," they were the first to congratulate Mrs. Bradley when she was made a DBE. So the book takes place some time before Watson's Choice (1955), which was the last book before Mrs. Bradley received her Damehood. 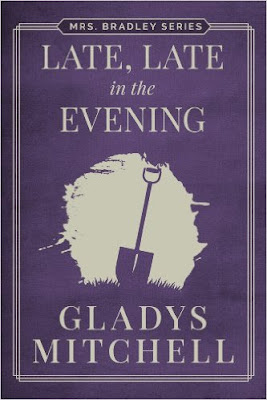 The story is laced with nostalgia and reads as if the genre itself is reminiscing about its childhood days spent in the many small, quaint and picturesque villages that stud the English countryside. You can even read the description of the book's setting, Hill Village, as an allegory of the changes the landscape of the detective story has seen in the decades succeeding World War II.

It's described how the village has "become an urban overspill" where "factories have grown up," a "motorway runs nearby" and "council houses and tall blocks of flats" were erected on a vast common once known as The Marsh, but story being told takes place long before progress marched across its rustic landscape – during a period when a charming village could still play host to one or two murders without being shamed as hopelessly old-fashioned. However, being hopelessly old-fashioned is an accusation not easily leveled against even the most traditionally structured and plotted of Mitchell's mystery novels (e.g. The Mystery of a Butcher’s Shop, 1929). Late, Late in the Evening is no exception to that rule!

There are several narrators in the story, but the best-drawn and most memorable ones are a brother and sister, eight-year-old Kenneth and ten-year-old Margaret, who came down from London to spend their school holidays with their grandfather. The first quarter of the book is a lovely depiction of village-life in the early part of the previous century, which imparted such important knowledge on whether to buy sweets from old Mother Honour's post-office and general store or Miss Summers' bread and confectionary store – both of them offered advantages and disadvantages to the village children.

We also get to learn the layout of the village and some of the people who live there. Where and with whom they play. How they struck up a friendship with a boy, Lionel, who's the grandson of the local matriarch, which becomes important later on in the story and everything is littered with references to food: brandy balls, sugared mice, chocolate cream rabbits, biscuits and bars of chocolate cream. Mitchell had an uncanny knack for creating believable child characters that were neither miniature adults nor could be cast as Damien in The Omen, but I don't remember reading a novel of her before, which prominently featured children, that were this obsessed with sweets. It was just very noticeable. 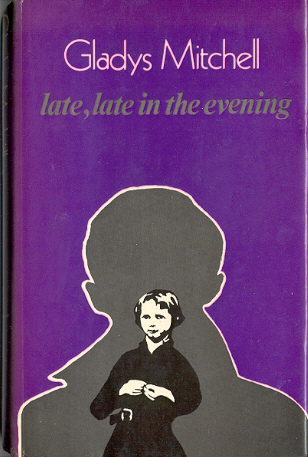 Anyhow, the highlight of their story is attending the yearly village fair, which had "its roots in the dim and distant Middle Ages," but the "only remaining vestiges of its original function," besides the trade from outside merchants, are the small stalls, boots, tents, roundabouts, swings and other "exciting and noisy pleasures." It's an annual happening children save up for all year to have money to spend on the fair grounds. A significant part of this chapter takes place inside a tent to a watch, what would be considered today, an American-style wrestling match and the contest is between Tiger-Cat Bellamy Smith and Jacques Collins. Of course, one of the attendees is heard muttering how it's a rigged game, because "the winner knew he was booked to win and the loser knew he was to lose" as they "both knew exactly when the dénouement would come." It was a fun, lively and interesting chapter, but you're probably wondering at this point what happened to the plot.

A quarter into the book, Mrs. Kempton, local matriarch and Lionel's grandmother, writes a letter to Mrs. Bradley about her troublesome and supposed brother, Mr. Ward, whose back story echoes John Dickson Carr's The Crooked Hinge (1938) and E.R. Punshon's Ten Star Clues (1941). Ward is a lodger of the next-door neighbors of the Clifton's grandfather and Mrs. Kempton is worried about his mental health, because he was seen digging apparent random holes all over the village. She also fears for the safety of her grandson. Lionel is an obstacle to a full-inheritance.

It's a fear that seems justified when a birthday party Mrs. Kempton threw for her granddaughter, Amabel, ended with the discovery of the battered body of a young girl in a dinosaur costume. Lionel was seen wearing a similar outfit and Ward is nowhere to be found, which is suspicious to say the least.

There are not many suspects and the observant, experienced reader will probably identify the murderer early on in the story, but the scarce number of suspects was handled with more skill than I expected from late-period Mitchell. Gladys Mitchell is somewhat of an acquired taste and some of her work misses the lucidity once expects from detective stories, because Mitchell saw her books as fairy tales and rarely took crime itself seriously – which can result in an incomprehensible mess (Hangman's Curfew, 1941) or a what-the-hell type of story (The Rising of the Moon, 1945). But when she gave her plots and clues as much attention as the writing you were in for a rare and original treat: Come Away, Death (1937) is one of my all-time favorite mysteries and St. Peter's Finger (1938) is still one of the book I would recommend to lure people to both Mitchell and Golden Age mysteries.

Plot-wise, I would rank Late, Late in the Evening somewhere below Mitchell's best work, but above most of her middling-efforts. However, the best (and saddest) aspect of the book is its depiction of how effectively time can obliterate the past. When the book opens, the village no longer exists and all of the events that are described took place many years before. The final chapter takes place a year after the murders and Kenneth and Margaret pass by the village, but they don't "want to go any further," because the changes had already began to manifest themselves. And then there's Margaret's question to Kenneth, "do you believe there was every any treasure hidden," which is answered with the final line of the book: "I did when I was younger."

I think those last lines are a good description of the genre and how it changed from the days of Edgar Allan Poe, Sir Arthur Conan Doyle, G.K. Chesterton, John Dickson Carr and Agatha Christie. When there was high-adventure waiting everyone who would dare seek it, but then the genre was forced to "grow up" and forgot how to dream and wonder as it wallowed in the soul-murdering drabness of modern realism. So Late, Late in the Evening is a fond, but sad, reminiscence of the genre’s earlier and happier days. On that account alone, I would recommend the book.

Anyhow, I've blabbered on long enough and will cut-off the blog-post here, before I start ranting and raving about the contemporary crime novel. I'll return with something less bittersweet for the next review.
Geplaatst door TomCat on 2/04/2016