An Eye for An Eye

"You’ll forgive me for being skeptical."
- Dr. Sam Hawthorne (Edward D. Hoch's "The Problem of the Revival Tent," collected in More Things Impossible: The Second Casebook of Dr. Sam Hawthorne, 2006)

Only last month, I reviewed The Dead Are Blind (1937) by Max Afford and I had not planned on returning to him so soon, but JJ, who blogs at The Invisible Event, wrote a very enticing review of Death's Mannikens (1937). So I'll be using that review as a convenient excuse for yet another blog-post about a locked room mystery, because there have only been about two hundred of them on this blog. 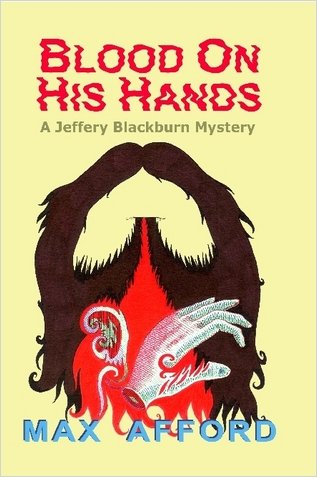 Blood On His Hands (1936) was Afford's debut as a mystery novelist and introduced a brace of characters, Jeffery Blackburn and Chief Inspector Read, who would fulfill the roles of detectives in four additional novels and several short stories – two of which were collected in Two Locked Room Mysteries and a Ripping Yarn (2008).

Chief Inspector William Read is introduced as a well-dressed man with a military bearing and bristling mustache stuck on a ruddy face, while Jeffery Blackburn is presented as a clean-shaven man in his mid-thirties with "the face of a scholar" and "a pair of gray eyes that twinkled humorously." The way in which Read took Blackburn by the arm and how the latter's long fingers clasped around a walking stick was very reminiscent of the way Inspector Queen and Ellery Queen wandered onto the scene of the crime in The Roman Hat Mystery (1929), which was their first recorded case. However, JJ made a similar observation about the resemblances between both duos and even Read's habit of referring to people as "son" ("what do you mean, son?").

The scene of the crime in Blood On His Hands is Carnavon Chambers, a new block of city apartments, where Judge Sheldon had a private rooms, but, evidently, the place was unable to guarantee his personal safety – since his body is found slumped behind a desk inside an inner room of the apartment complex. He has been stabbed with a peculiar blade and his right ear has been sliced off!

It's only to be expected of a High Court judge to have made an enemy or two, but, in the judge’s private life, Blackburn and Read uncover an infestation of motives that had the potential of leading to murder.

Judge Sheldon treated his poor wife, Lady Sheldon, abysmally, which is why he kept a private dwelling place. A place where he received a score of women. Sometimes as many as "half a dozen in a week," which was not exactly a well-kept secret. As a result, Lady Sheldon retreated in an emotional sanctuary and convinced herself that her first husband, "believed to be dead in the war," was still alive and would eventually return to her – which became an obsession to her. This supplied the daughter from that first marriage, Miss Valerie Sheldon, with a valid reason to hate her stepfather and she had "already begun to make a name for herself" with "her brilliant detective novels." On paper, she's considered "an expert at the perfect murder theory," but did she put one of her theoretical plots into practice?

There are additional suspects uncovered: Miss Gloria Grey, "a former musical-comedy actress," who became addicted to heroine tablets and her regular supplier was, what you would call, the least-likely-suspect in polite society. She had recently joined a Gospel Tent Mission, which was inaugurated by black-bearded man named Alfred Torrance. He was "erroneously reported dead in the war" and lost "his memory in an air-raid upon London." Yes, there were German air raids on London during World War I. It's just not as well remembered, because those raids paled in comparison to the hellfire that rained down on London in the next war.

Anyway, there are enough people surrounding the judge who did not mourn his passing, but that only covers possible answers to who and why and not the how aspect, which concerns the locked room angle of the murder. Judge Sheldon is found in a room on the eight floor of the apartment building with windows, locked from the inside, looking out on tiny balconies "hanging over a sheer drop of ninety feet to the ground." The door is locked from the inside as well and "the only existing key to the apartment" is "found in the dead man’s top-waistcoat pocket."

It's an intriguing, classically styled set-up for a proper locked room murder, but the explanation is essentially an old, simple, but elaborately presented, gimmick that only worked because police methods aren't always up to snuff in detective stories. Later on in the series, Afford would show he had a crafty and original mind for devising impossible crime plots, but that was not the case with his first throw at one.

There is, however, a second locked room in the book, which was slightly better, but not as clever or inspired as those from The Dead Are Blind, "Poison Can Be Puzzling" and "The Vanishing Trick," which involved an apparently unrelated murder of a shopkeeper.

A green grocer is slaughtered in his shop, stabbed multiple times and his right hand cut-off, but the only entrance, a side door, was locked from the inside and the front of the shop was under constant observation by an innocent witness – who swears nobody entered or left the building while she was watching. The method for this locked room trick has a rather simple and pragmatic explanation, workmanlike rather than inspired, but it did the trick and had a semblance of originality. It's the kind of gambit you'd expect to find in a Dr. Sam Hawthorne story by Edward D. Hoch.

Well, I guess I have to give a debuting Afford some props for twisting the unusual prologue, a pair of locked room killings and an additional murder together into a coherent narrative, but the final explanation was covered with the bloody paw-prints of the sensationalist novel/thriller – which, surprisingly, shared some plot similarities with John Rhode's The Murders in Praed Street (1928). So I experienced Blood On His Hands as a very uneven novel and a troublesome one to write a proper review about, because I wanted to like the book more than I did by the end. Everything else I read by Afford was excellent, but I’m afraid this one simply did not do it for me.

Hopefully, I'll pick something better for my next review, but, in the meantime, you can read my enthusiastic prattling about Gladys Mitchell's Late, Late in the Evening (1976), which was the book I previously reviewed on here. So stay tuned!
Geplaatst door TomCat on 2/06/2016