A Window into the Past

"Elephants can remember... that was the idea I started on. And people can remember things that happened a long time ago just like elephants can. Not all people, of course, but they can usually remember something."
- Ariadne Oliver (Agatha Christie's Elephants Can Remember, 1972)

During the final quarter of 2015, the already indispensable Dean Street Press reissued half of Annie Haynes' neglected, long-forgotten and out-of-print body of work, which consisted of seven mystery novels starring either Inspector Stoddart or Inspector Furnival – all of them furnished with an insightful introduction by our very own genre historian, Curt Evans. Now they are going to complete their reissues of Annie Haynes' crime-fiction with the scheduled release of all five of her standalone novels. 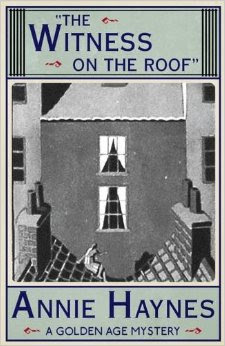 Rupert Heath of the Dean Street Press offered a review copy and I requested The Witness on the Roof (1925), because I was fascinated by the book’s plot description.

The Witness on the Roof begins in early May, 1897, in Grove Street, "a precinct which had undoubtedly known better days," where the only "remnants of past greatness" are the lofty rooms and large windows. A young, impish child, called "Polly," has taken refuge between the chimneystacks on the rooftop to escape from the rough blows and verbal abuse leveled at her by her stepmother. At first, Polly is looking upon this rooftop world like "a conqueror exploring some unknown world," but she began to wonder what happened behind all those blinds and peeked into a window of a studio apartment – where she saw something that would come back to haunt her as an adult.

Polly observes a room stacked with unfinished canvases, an untidy litter of paint tubes and a big easel in the middle of the room, but what really attracts the child's attention is what looks like "a heap of white drapery" near the fireplace. There's also a man present in the room. A tall, broad shouldered man who's busy tearing up papers, photographs and books, which were then tossed into the bright, open fire that roared on the hearth.

As Polly witnesses this strange scene, she slowly comes to the realization that the "tangled mess of drapery heaped upon the rug" is the body of a young woman! She sees how the man places a gun near the dead woman's hand and gives herself away. However, the only thing the man sees is a child "scuttling over the roofs" until she's out of his sight. There would be many years before anyone else learns that there was a witness to, what the newspapers called, the Grove Street Mystery.

It's not long thereafter that Polly is whisked away from the slums of Grove Street to live with the
well-born family of her late mother.

A decade came and went and the passing of the years turned the "small, grimy-looking child" with "ragged brown hair" into a proper lady. Living with her cold, uncaring grandmother was not a full improvement on her previous situation, but, recently, the world started looking favorably upon Polly – who's now known to everyone as Joan Davenant. Her grandmother's will named her beloved, long-lost sister, Evie, as the main beneficiary, which means people were finally going to look for her. On top of that, Joan has married a wealthy, titled gentleman and became Lady Warchester. 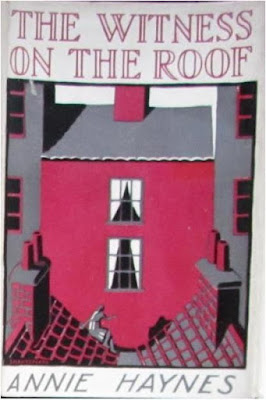 Everything appeared to have worked out for her in the end, but when she takes an innocent stroll down a garden path, snaking around her home, she sees something that awakened memories that have lain dormant for a decade. She glanced at one of the windows of her home and sees someone moving around that room that suddenly reminded her very much of the man she saw on the roof in Grove Street as a child. It’s someone very close to her!

I've already seen The Witness on the Roof being compared with Agatha Christie's Sleeping Murder (1976), which was originally penned during World War II, but it should be pointed out that the plot also has certain points of resemblance with 4:50 from Paddington (1957). The Witness on the Roof shares a child witness and a crime in the past with Sleeping Murder, but the window scenes described above were very reminiscent of how Mrs. McGillicuddy saw a murder being committed and identified the murderer by the end of 4:50 from Paddington. You can see Haynes' story as a combination of these two plots.

Stylistically, The Witness on the Roof seemed like Baroness Orczy expended one of her short stories into a full-length novel, because "The Grove Street Mystery" could easily have been the title of one of the stories from The Old Man in the Corner (1909). The plot also followed the pattern of the type of crime-fiction that was writing during the time the story was set in, i.e. the late-1800s and early 1900s.

There were a number of characters acting as detective, searching for answers to such pertinent questions as the identity of the murdered woman, while other answers were supplied by characters confessing to their part in the drama or showing their true colors. It makes for a nice, extremely old-fashioned detective story that's only marred by the cosmic coincidence that connected certain characters so long after the murder in Grove Street. You can argue it's the kind of singular coincidence that streaked sensationalist fiction from the Victorian-era and showed Haynes belonged to an earlier period in the genre's history, but if you love both crime-fiction from the days of Conan Doyle and Fergus Hume than you might want to give The Witness on the Roof a look.

I feel as if I have not done the book complete justice with this lousy review (distractions, distractions), but I definitely enjoyed the book, because I was in the mood for something genuinely old-fashioned and Haynes filled that order with a well-written, very satisfying book reflecting an earlier period of the genre that preceded the Golden Age. Considering it was published in the mid-1920s, you can say it still counts as a transitional mystery novel, albeit a late one, but still a transitional one.