Death Has No Friends

"I mean they were not even normal murders... the man who is hounding us all to death is a hell-hound, and his power is from hell."
- Mr. Arnold Aylmer (G.K. Chesterton's The Incredulity of Father Brown, 1926)

The Bath Mysteries (1936) is the seventh entry in E.R. Punshon's Detective-Sergeant Bobby Owen series, which has an indefinable plot patterned after the infamous "Brides in the Bath Murders" from the 1910s and offered a brief glimpse at Owen's aristocratic side of the family – one of them who died under suspicious circumstances.

Bobby Owen is summoned to the ancestral seat of his kin and the opening chapter finds him assessing the place's "interminable and depressing length," which has become unaffordable as a permanent residence, but the reason for his summons had nothing to do with the family coffers. It concerns one of his cousins, Ronald "Ronnie" Owen, who vanished over three years ago. 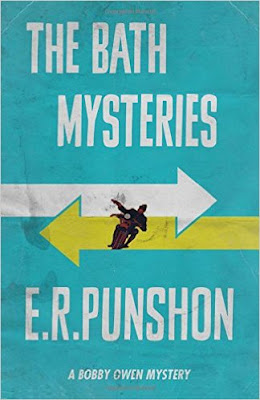 The departure of Ronnie Owen coincided with a "disastrous and scandalous divorce case," after which "he had vanished from the ken of all his former friends and acquaintances," including Cora – his "justly offended wife." Owen seems to expect that Ronnie's drunken habit has finally caught up with him, but what is being revealed is far more serious and sinister than he could have possibly imagined. A woman who identified herself as the widow of man named Ronald Oliver, the presumed alias of Ronnie, pawned a signet ring that bore the family crest, which happened only a day after she collected 20,000 pounds from an insurance company. People had been murdered for far less in those days!

There is, however, one problem: the body of the man, who called himself "Ronald Oliver," died in a bathtub from "the effects of boiling water coming from a lighted geyser" that "pour continuously for a day and a half." He was boiled alive! The police assumed the victim wanted a bath to sober up and was overcome by the steam, which led to a verdict of "Death by Misadventure," but his actual widow, Cora, disagrees with this interpretation – believing he was murdered. So the family draws on their influence to put Bobby in charge of a discreet investigation.

It's not an easy or grateful task, because Bobby is fully aware that in an investigation "a time-lag of a few minutes is often of such importance as to make the difference between success and failure" and here there was an interval of months. And for "guilt there is no cloak like the lapse of time." However, that's not the only problem staring Bobby in the face: Ronnie had shuttered himself away in a small flat, cut off from his former life, which barely left anyone to interrogate.

A problem amplified when Bobby comes across several potential victims, lonely men "who had fallen or been thrown from their places in society" and "deliberately cut themselves entirely adrift," but, somehow, still had their lives insured for several thousands of pounds – which in those days amounted to a small fortune. It's not surprising Bobby begins to suspect he's up against "a kind of murder factory," but it's also where the book begins to diverge from your typical, 1930s Golden Age-style detective novel.

The plot of The Bath Mysteries is hard to define, because it consists of a lot of different elements: deceptively starting as a classic whodunit, but soon becoming more thriller-like with a conspiratorial nature that gives the story a sinister and unsettling touch. But underneath all of that, The Bath Mysteries is an early predecessor of the British police procedural. Instead of fretting about muddy footprints, cigarette buds and alibis, Bobby is pounding pavement and doing what looks like legitimate police-work, which can be experienced (when contrasted with the other elements) as dull and disappointing – because it's essentially routine police-work. There are also several characters who would feel quite at home in a modern-style crime novel by the likes of P.D. James or Reginald Hill: a woman trying to leave her life as a prostitute behind her, an ex-convict who mentally has never healed from a flogging he received in prison and an elderly, stick-fingered lady as old as she's experienced in evil. The book ends with these three characters as they find some redemption, which was a nice touch, but you have to read the book yourself to find out how.

Punshon really strayed away from the Golden Age here, but, from a historical perspective, it's an interesting predictive book that anticipated the crime novels and police procedurals of the post-World War II era. He did so in the mid-1930s! The only weakness is that he also anticipated that murderers would not be as well-hidden as they were during his days, which is a pity, but the upside is that the book can be used as lure to draw readers of contemporary crime stories to our side.

Speaking of historical content, The Bath Mysteries has one of the earliest references to the early days of television: Bobby is given a tour of a luxurious apartment and was "shown the television screen," but, "unfortunately," there was "no television programme on at the moment." You can watch a snippet of television from the year this book was published here. But I have prattled on long enough. I'll be back before long with a review of something slightly more orthodox. At least, I hope so. That was basically the plan when I picked up The Bath Mysteries to read.
Geplaatst door TomCat on 2/15/2016