In my previous blog-post, I reviewed The Green Ace (1950) by Stuart Palmer. The plot of the book focused on proving the innocence of an inmate of the death-house, a week before his scheduled execution, which heavily influenced my decision on what to read next – namely Headed for a Hearse (1935) by Jonathan Latimer. It offers a much darker treatment of the race-against-time plot device that Palmer toyed with in The Green Ace. 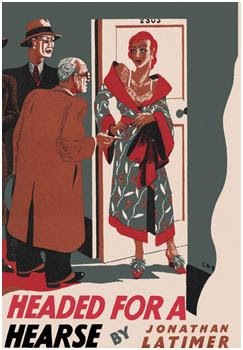 Professionally, Latimer and Palmer had more in common than just being writers of crime and mystery novels: they were both worked as screenwriters in Hollywood where, reportedly, they collaborated with a colleague of theirs – "Craig Rice," the Queen of the Screwball Mystery. However, that's where the commonalities end. Latimer's work has some of the structural framework of the classic whodunit and several of his novels are listed in Robert Adey's Locked Room Murders and Other Impossible Crimes (1991), but everything in between is firmly rooted in those mean streets of Dashiell Hammett and Raymond Chandler. I guess Latimer could be considered, content-wise, to be a literary ancestor of a contemporary hardboiled enthusiast of locked room mysteries, Bill Pronzini. Anyhow...

Headed for a Hearse, also published as The Westland Case, opens in "the dim cavern" of Robert Westland's condemned cell in the death-house – where he awaits his execution for the murder of his wife. A reviewer on the GADWiki observed that the book actually consists of two separate stories: a hardboiled mystery that's closely intertwined with a short story about Westland in the condemned cell. I agree with that observation, because, despite the interlacing characters, they read as two completely different stories.

Westland shares his looming fate and final dwelling place with two other prisoners: Dave Connor, a labor racketeer, who bumped off "a couple of New York torpedoes hired to fog" him, but the place where he unloaded his gun turned out to be swarming with cops – which, retrospectively, was not the best place "for fogging those Canzoneri brothers." The prisoner is a whimpering, crying and borderline psychopath, named Isadore Varecha, who gutted a prostitute and now spends most of his time on his cot muttering "Jesus Christ" and "I don’ wanta die."

They have to deal with an unpleasant prison guard, Percival Galt, who enjoys taunting the prisoners, such as spilling a meal on the cement floor and saying he "can't help it if a prisoner throws his food into the hall," which reminded me of Percy Wetmore from The Green Mile (1999).

Initially, Westland acquiesced in the hopelessness of his situation and was prepared to die on the electric chair, but a semi-anonymous letter gave him a change in attitude. The letter, initialed "MG," is from someone who had no business being in the building at the time of the murder, but if something can be fixed, so he doesn't "have no trouble," he’s willing to the D.A. what he knows. There is, however, a minor problem: all of this happened a week before Westland is strapped to the hot-seat! So Westland engages a high-price attorney, Charley Finklestein, but the evidence is stacked against him. 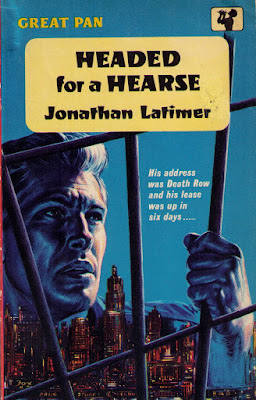 Westland lived separate from his wife, Joan, but still retained a key to her apartment, which becomes a huge problem when her body is found there – shot through the back of the head. The only door giving entrance to the apartment had to be broken down and was outfitted with "a special lock" of "the kind that doesn't snap," but "has to be turned with the key." There were only two keys that fitted the lock: one of them was found inside the apartment and the other was in constant possession of Westland. All of the windows were locked from the inside and twenty-three floors from the ground. The small package entry in the kitchen was not big enough to have even allowed a trained monkey passage. What was really damning is that the neighbors heard the report of a gunshot at the time Westland admitted he was in the apartment.

It's this package of evidence that send Westland en-route to the death-house. So Finklestein decided to fly-in a pair of private-investigators from New York, Bill Crane and Doc Williams, to reevaluate the evidence against the condemned man – before his time is up and they do so in typical hardboiled fashion. They got shot at from a car with a sub-machine gun, which leads to them roughing-up a suspect. There are several additional murders. They royally water themselves with drinks, take big meals and occasionally leer at women.

However, there's also some genuine detective work on the part of Crane, which confirmed the traditionalist streak his plots reportedly contained. Crane provides a cleverly old-fashioned, but false, explanation for the problem of the locked apartment with a ball of string and a pin. This false explanation echoed the trick from L. Frank Baum's "The Suicide of Kiaros," which is an inverted locked room tale from 1896 and collected nearly a century later in Death Locked In: An Anthology of Locked Room Stories (1987). Unfortunately, the solution to the impossible crime aspect was disappointingly simple and routine. A type of "trick," or "misdirection," I have seen too often and I can honestly (and arrogantly) say I preferred my own explanation. But what can you do?

Crane also finds the proverbial needle in a haystack with the assistance of a long, expensive cab-ride and even more expensive professional diver. It's an investigative operation that has put "more men to work than Roosevelt's recovery program."

All of this tallies up to an interesting, often fun and occasionally even stirring, but ultimately uneven, debut novel. The gap in quality between the excellent death-house scenes and the investigative parts of the novel are hard to miss, which makes the somewhat disappointing conclusion to the case extra noticeable. Overall, Headed for a Hearse is not a bad book. It's just not a masterpiece of its kind.

Nevertheless, I'm glad I finally got to sample Latimer, but I wish I had started with Murder in the Madhouse (1935) or The Dead Don't Care (1938). They seem like interesting combinations of the hardboiled narrative with a classic locked room problem at their core. So I guess those are for a later date.
Geplaatst door TomCat on 2/12/2016