"My curiosity is roused by your locked-room. If you can find a new way of doing it, many congratulations."
- John Dickson Carr (excerpt from a letter to Anthony Boucher)

I had originally planned to post another review of a Christmas-themed country house mystery, supposedly written in the same vein as C.H.B. Kitchin's Crime at Christmas (1934) and Georgette Heyer's Envious Casca (1941), but the story proved to be surprisingly dull and lacking in spirit – which caused me to become bogged down around the halfway mark. Obviously, I needed a break.

Incidentally, a fellow mystery blogger and locked room aficionado, known as "Double J," posted a review of Owl of Darkness (1942) by Max Afford, which gave me an idea. I would take a brief detour and return to the pages of that Christmas mystery with renewed vigor and energy! 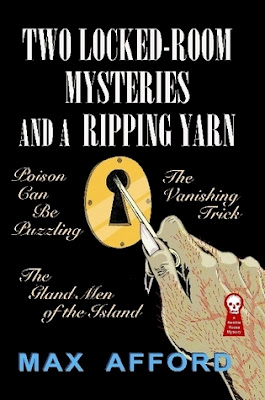 A slender volume containing several of pieces of Afford's shorter fiction, entitled Two Locked Room Mysteries and a Ripping Yarn (2008), seemed to lend itself perfectly for that purpose.

Max Afford was an Australian news reporter who turned to fiction in the late 1920s and edged out a name as an author of more than sixty radio-and stage plays, but readers appreciative of Golden Age mysteries will associate his name with the Jeffrey Blackburn novels – a handful of them are even listed in the late Robert Adey's Locked Room Mysteries and Other Impossible Crimes (1991). Somewhat surprisingly, however, is that Adey only listed the full-length locked room novels and not the short stories collected in the volume under review. Because they were (IMHO) excellent examples of the genre.

The first story is "Poison Can Be Puzzling" and was originally published in a 1944 issue of The Australian Women's Weekly, which has Jeffrey and Elizabeth Blackburn being plucked away from the cinema by Inspector Read. Some trouble is brewing and Read figured Blackburn "might like to be on any fun that's offering."

Ferdinand Cass is a "financier of sorts" and "so crooked he could hide behind a circular staircase," which made it advisable to turn his home in a fortified stronghold: a flat "eight floors from the ground" and "six from the ground" with covered windows and a steel floor-and ceiling. A single door, giving entrance to the apartment, is double locked and chained. There's only one problem: all of those securities offer protection against mortal beings, but not from a vengeful ghost from beyond the grave and the reason why he "demanded police protection until after midnight."

The disgruntled ghost in question is that of Cass' late-wife, who got "mixed up in some black magic hocus-pocus" and threw herself out of a window, but her spirit appeared during a trip in the South American jungles and prophesized his death. Even her perfume can be smelled inside the home!

Unfortunately, all of the precautions and presence of a couple of detectives were in vain, because Cass is mysteriously poisoned "while dressing alone in a hermitically-sealed room" with "four witnesses standing not a dozen yards away."

The choice of victim, the locked room set-up and a seemingly impossible poisoning was very reminiscent of Arthur Porges' "The Scientist and the Exterminator," collected in The Curious Cases of Cyriack Skinner Grey (2009), and The Adventure of Caesar's Last Sleep (1976) from the Ellery Queen TV-series, but with a completely different and original solution – one that is distantly related to a John Dickson Carr novel from the 1930s.

The next story is "The Vanishing Trick," first published in 1948 in Detective Fiction, which has Jeffrey and Elizabeth Blackburn visiting friends at their historical home.

Kettering Old Home is one of the oldest houses in England and has "a kinda haunted room." The room lacks a proper, old-fashioned English ghost, but people tend to "just vanish into thin air" when left alone in the room, which began in the 1700s: a local parson was accused of witchcraft and held prisoner in the haunted room, but when the room was opened the man had simply vanished. But it's not all ancient history.

Three years before, the previous owners asked one of the servants to clean out the room, but "the door slammed shut on the poor devil" and "when they opened it again" they made an unsettling discovery – the room had swallowed and digested another victim. However, the guests of Jim and Sally Rutland are skeptical, because they have a penchant for practical jokes.

A suspicion confirmed to the reader when Sally convinces Elizabeth to become complicit in a prank: Sally wants to be sealed inside the room, while dressed as a servant, in order to give the "doubting Thomases" a scare when they come down to investigate the supposedly haunted room. Sally is locked up in the room by Elizabeth, but as soon as the bolts were shot and walked down the passage there was a call for help ("Elizabeth... help! Come back!"). The room had lived up to its reputation and swallowed up another human being.

As Jeffrey Blackburn remarks, "the trouble with practical jokes is that they have damndest way of kicking back," which occurs when a second person vanishes from the room and Sally refuses to resurface.

I'm surprised "The Vanishing Trick" never founds its way into one of the many locked room anthologies, because it's a wonderfully charming example of the impossible disappearance and a wonderful clue is slipped in during Sally's disappearance. A clue that reveals the entire trick, if you're observant enough. In short: I loved this one.

The final story is "The Gland Men of the Island," originally published in 1931 in Wonder Stories, which is not a detective story. A small group of men make a momentous discovery on "one of the numerous islands that stud the Polynesia," which they made when following a well-worn path to a thick island-forest and discover a race of Asiatic giants. I initially assumed this was one of those lost civilization stories, but it soon revealed itself as one of those genre-bending, pulpy tales of Yellow Peril and featured a sinister Chinese scientist – who wanted to "restore China to rightful position as Mistress of the World."

I'm not really a fan of sensationalist pulp stories, but this one answered a question I never dreamed of asking: what would be the result if Sax Rohmer had written Mary Shelley's Frankenstein (1818). So there's that.

Well, I enjoyed this collection as a whole and reminded me why I love locked room mysteries. I'm curious now to see what Afford is able to do when he writes full-length impossible crime novels. And, now, back to that dreadful Christmas mystery!
Geplaatst door TomCat on 12/06/2015