Things That Go Bump in the Night

"A cup of kindness that we share with another
A sweet reunion with a friend or a brother."
- It Feels Like Christmas (The Muppet Christmas Carol, 1992)

I had to interrupt and postpone an unusual New Year's mystery, when M.P.O. Books' Dodelijke hobby (Deadly Hobby, 2012), a slender, soft-cover volume comprising of a novelette, a pair of short stories and some promotional material, arrived in the mail – an early Christmas present, to be sure!

Dodelijk hobby was originally published as a downloadable, free-give-away ebook, after being shelved for a number of years when Books and his previous publisher parted ways, but due to its enormous success (close to 80.000 downloads!) and numerous requests for a print version, it was "bookformed" with some of his other, earlier material. The tales that make up this book show the other side of Books, a crime writer who's also aware of the works of the literaties laboring in his field. Except for the second, classically styled story and the titular novelette shines with his love for intricate plotting and the Sherlock Holmes canon. Books also announced the title of his next District Heuvelrug novel: Een afgesloten huis (A Sealed House, 2013). I told you it was like Christmas came early this year! 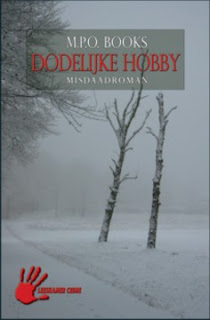 Deadly Hobby takes place during the dark, snowy days of Christmas that André Lourier was hoping to spend in the company of Edgar Allan Poe and Charles Dickens. He's house-sitting a remote village that belongs to his cousin and her husband, who's an avid collector of Delfts blue, miniature houses and has build quite a collection up in his secured attic-room. But it's due to André that burglars were able to swipe the entire collection from under his nose and with the Christmas celebrations in full swing, the police are understaffed and their hands tied-up to more press casings. So the housekeepers decides to turn detective and help the attractive inspector, Inge Veenstra, help finding the thieves and restore the collection.

But it's a fare more complex story involving more than just a stolen city of Delfts blue houses. Just in the first half, a number of apparently unrelated plot threads are introduced that all tie-together in the end. This is very reminiscent of the kaleidoscopic plotting technique Books used in De blikvanger (The Eye-Catcher, 2010) and De laatste kans (The Last Chance, 2011), which had very satisfying results. Unfortunately, Deadly Hobby missed out on the opportunity of giving the reader a fair shot at cracking the case themselves, but that still leaves the reader with a well-written crime story that literary keeps you guessing until the end!

Interestingly, Deadly Hobby has a weird tie-in with the Van Dine-Queen and Hardboiled School. This is completely coincidental, but interesting, nonetheless. André Lourier assumes the role of amateur sleuth in a case revolving around collectors and the movement of everyone involved ends up being very important for the solution. This plot complexity with a clear and understandable solution was something these writers aimed for and we also get to see Books' series character, Inspector Bram Petersen, and his team of policemen work on another case – a triple homicide echoing the crime from Conan Doyle's "The Adventure of the Devil's Foot." Books also continued to flesh out his characters in this book, which helped made the story feel part of the series instead of standalone (all that in less than 90 pages!).

Less typical of the Van Dine-Queen School, but more so for the Hardboiled guys, was the portrayal of criminals and few physical altercations, including André getting knocked on the head and locked up in a room, while the burglar plundered the attic, after which he's determined to set the thing right himself. Much like a chivalrous, lone-knight in a raincoat and fedora would've done. As a matter of fact, André's situation reminded me of The Nameless Detective’s predicament in Bill Pronzini’s "Where Have You Gone, Sam Spade?"

"Handige dief!" ("Handy Thief!") was penned nine years ago for the Dutch website Crimezone. The story is set in an English, countryside village in the present time, but the status quo of a previous era has remained in tact and the villagers have gathered on the cemetery to pay their last respects to a local baron – who's to be buried in the family tomb with a valuable brooch encrusted with stones. A local "handyman," Harold Straker, plans to relieve the baron from his Earthly possession, but the ancient tomb is equipped with modern locks. A fun little story with a twist.

"De indringer" ("The Intruder") is a straight up thriller and involves a well-to-do, but insecure woman, who finally found a companion before he went missing. One night, she finds that there's an intruder in the house. Has he returned? Not my kind of story, I'm afraid.

All in all, this volume served a few nice morsels of crime to whet the appetite for what’s coming next year.