The Naughty List: A Modest Selection of Lesser-Known Holiday Mysteries

"But where are the snows of yester-year?"
- F. Villon.

I have an irregular tradition of reading holiday and winter themed mysteries around this time of the year, depending on what's easily available and how far I planned this ahead of time, and this could've been one of those off-years were it not for a few new releases and a lucky purchase. Simon de Waal and Appie Baantjer's Een licht in de duisternis (A Light in the Darkness, 2012), M.P.O. Books' Dodelijke hobby (Deadly Hobby, 2012) and Mike Resnick's, Stalking the Unicorn: A Fable of Tonight (1987), taking place on New Year's Eve in an alternate Manhattan, were well written nuggets of criminal ingenuity wrapped up in the magic of the season – making this officially not an off-year. I have my wish list of Christmas mysteries not yet fully worked through, but that's something for when the New Year begins to wane. 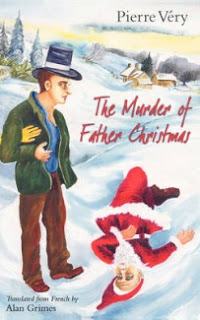 So, what then is the purpose of this blog post? Well, the idea is to compile a list of seasonal yarns of suspense and mystery that aren't all that well known, and perhaps offer one or two alternatives to (re-reading) Agatha Christie's Hercule Poirot's Christmas (1938) and Ngaio Marsh's Tied Up in Tinsel (1972).

Pierre Véry's L'Assassinat du père Noël (The Murder of Father Christmas, 1934) was ferried across the language barrier in 2008 and this entry on the GADWiki, penned by fellow blogger Xavier Lechard from At the Villa Rose, identifies Véry as a literary visitor from the mainstream – who nonetheless preferred gentle surrealism over cold, stark realism. The Murder of Father Christmas attests his opinion that "what counts for an author (and for a person) is to save what has been able to remain in us as a child that we were, of that person full of flaws, of changes of heart, of shadows and mystery" and the story unfolds like grim, but benevolent, fairytale involving stolen gems, missing relics, Cinderella’s slipper and a murdered man in a Father Christmas costume. A lawyer on hard times, Prosper Lepicq, only two months behind on his rent for an office space crammed with impressive looking filing cabinets filled with blank dossiers and old newspapers, is requested to look into the mess. The Murder of Father Christmas has a magical, fairy tale-like quality reminiscent of Gladys Mitchell's most imaginative tales, but also their weaknesses. On the other hand, this was obviously not written as an affair of cold reasoning, but an attempt at enticing the reader to participate in a delightfully childish game of Who-dun-it? in the snow. 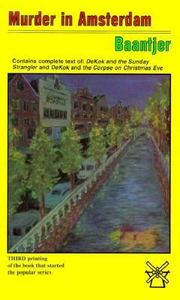 DeKok en het lijk in de kerstnacht (DeKok and the Corpse on Christmas Eve, 1965) is an early (and translated) entry from A.C. Baantjer's long-running DeKok series and dribs, more than usually, with influences from Georges Simenon – making it notably different in tone and structure from the rest of the series. It’s a straight up, character-driven crime story that swirls into motion when the body of a woman emerges from the cold, murky undercurrents of the Herengracht on Christmas Eve. A grumpy DeKok, wrapped in his rumpled raincoat and formless head, joins his then even younger and more inexperienced partner, Vledder, to stalk the deserted, lantern-lit streets of Amsterdam on Christmas Eve to find the killer who ended the life of a young woman and her unborn child. Baantjer advances the plot here through character sketches, police interviews and posing moral problems, which resulted in one particular Christmas scene when DeKok has a sober (and possibly illegal) Christmas diner with a prostitute, a criminal and his victim. It's a darker story than Véry's benevolent pipedream, but if you like crime novels with a human element than you might want to pick this one up. But take note, it's not representative of the series.

The next title on the list was reviewed on here this past summer, but it was nonetheless a mystery novel draped in the traditions of the Yuletide season – mixed up with rural legends, folks dancing and ghost yarns. Gladys Mitchell's Dead Men's Morris (1936) packs everything her fans have come to love about her imaginary tales and wrapped everything up more neatly than usual. Mrs. Beatrice Lestrange Bradley travels to Oxfordshire to spend the holidays at the pig farm of her nephew, Carey Lestrange, where a local country-lawyer of ill repute was apparently hounded to death by the local legend – a headless horseman known as the Sandford Ghost. It's nearly always a guarantee that you're getting something different from Mitchell, but when the plot is as clear as the writing, it becomes a rare treat indeed! 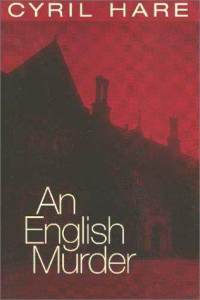 An English Murder (1951) is a standalone effort from "Cyril Hare," a penname for Judge Alfred Gordon Clarke, who drew on his knowledge and experience to pen a stack of detective novels. His series detectives were Inspector Mallett and the barrister Francis Pettigrew, but in An English Murder, also published as The Christmas Murder, it's a Hungarian historian, named Dr. Bottwink, who has to unravel what appears to be a fairly typical, British drawing room murder. The only real drawback I have found in Hare's books is that his plots tend to hinge on obscure laws or nearly forgotten passages of history, making it harder to completely solve them before the detective does.

Finally, I want to recommend Paul Halter's Night of the Wolf (2006), a collection of short stories, as it offers quite a few stories set during dead of winter. "The Flower Girl" and "The Abominable Snowman" are perhaps the best of the lot, entailing a homicidal snowman killing in front of witnesses and Santa Claus who may have used his magic to bump of an unpleasant, Scrooge-like figure, but also includes "The Golden Ghost" and the titular story – all set during those dark, snowy days of December.

I could extend this list further, but Micheal Innes' Lament for a Maker (1938) and Nicholas Blake's Thou Shell of Death (1937) and The Corpse in the Snowman (1941) are probably well-known titles among the readers of this blog – and how much can you order and read in less than two weeks. Hm. Perhaps I should've put this one up a lot sooner.
Geplaatst door TomCat on 12/14/2012