The Spy Who Played Clue

"I mean, it does say 'hotel' outside. Maybe I should be more precise, 'Hotel for people who have more than 50% chance of making it through the night'!"
- Basil (Fawlty Towers)

Christopher Kelman Dalgety Frost (1899-1972) has proved to be somewhat of an elusive figure in the realm of mystery fiction, but on the printed pages of children and juvenile stories, he left us enough clues to reconstruct a picture of the man. On the report of Jane Badger Books, Frost began writing at the age of sixteen in the trenches of France, however, Book Palace Books notes that his earliest known work were the adventures of 'Don Conquest' for Mickey Mouse Weekly – which ran from 1954 to 1957.

His entire bibliography seems to be a bit of a mess, consisting of a lot of unconfirmed and unaccredited stories, which is mainly due to being a freelance writer who anonymously churned out stories to fill the pages of D.C. Thomson's boys paper, but Something Scandalous at Lilac Cottage (19??) was supposed to be published under the name of Kelman Frost and I have only found a mention of the book in Death Registers at the Eagle Arms (1947) as "in preparation." Was the Oberon Press dissatisfied with the end result/sales of the previous novel and cancelled its publication? Or was it simply retitled before publication? 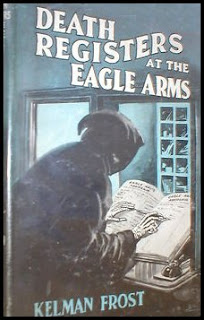 I'm intrigued whether it suffered the same, horrifying fate as Hake Talbot's third Rogan Kincaid novel, The Affair of the Half-Witness, or collecting dust somewhere as an unpublished manuscript, like Christianna Brand's The Chinese Puzzle and Anthony Boucher's The Case of the Toad-in-the-Hole, or just insists on being one of those ridiculously rare mystery novels. Any info would be appreciated! 'Cause curiosity can be an agonizing thing.

Death Registers at the Eagle Arms is a Kelman Frost novel that did wound up in my covetous hands and it's set in a dreary, depleted hotel on the Scottish coast during the blackouts of WWII and the grounds of the Eagle Arms teems with stationed military men, fascists and secret agents from both sides of the enemy line – all that without degenerating into a run-of-the-mill spy thriller. Frost kept it a plain and simple mystery, which commences when Malcolm Woodley, a prolific mystery novelist without literary pretensions, and his wife Isobel notice that the bathroom opposite of their room has been occupied for quite some time. A second key from the upstairs bathroom, which is almost identical to the one they're unable to locate, is fetched and upon opening the door, they find that the tub is filled with what remains of Mr. John Hood.

Enter Inspector Hynd, who's one of those bland policemen whose character is only defined by his job and a rather unimpressive figure to tangle with spies, but he has to think in that direction when Mr. Hood turns out to have been a Security agent. What's more, one of the maids, Poppy, who saw light signals when rendezvousing with her lover, is found decapitated near the train tracks. But Hynd has more threads to pick from: Dr. Inglis is relieved from a bottle of strychnine and subsequently an attempt is made on his life with that same poison. Another maid disappeared without a trace. And Colonel Wylie-Smith appears to have a much more personal motive for wanting to see Hood dead.

Admittedly, Death Registers at the Eagle Arms is not an overlooked treasure from the shelves of biblioblivion, but it's a charming enough and uncomplicated mystery whose strength lies in an idea rather than the execution of it. I anticipated the solution in spite of the sparse clueing (some of them even being withheld from the reader), which can be done by every observant and seasoned mystery reader, and enjoyed the idea. The ending also upheld a fine old tradition without being trite. Great image to end a novel on, and to be honest, the only proper way to have done it. But it also showed that Frost was more a writer of adventure stories as opposed to mysteries (i.e. interviewing suspects can indeed be a dull routine) and I think an amateur detective would have been a better option for him as a writer – like A.A. Milne did in The Red House Mystery (1922). Granted, it's eventually one of the guests that turns up with the corrects solution, but the investigation was done by Hynd and he could've easily been reduced to a background character doing the tedious police work while one or two amateurs are enthusiastically running around the place. I really think it would've made for a better story.

Two things: 1) Robert Adey's Locked Room Murders and Other Impossible Crimes (1991) dated this book at c. 1948, but the online sources I found all give 1947 as the original publication date – so I went with that. 2) Death Registers at the Eagle Arms is not really a locked room mystery. The original key of the door is found inside the bathroom and they immediately deduce that the murderer threw the key under crack of the door back into the room that could be opened with different key anyway. An impossible crime in name only.

Death Registers at the Eagle Arms (1947)
Something Scandalous at Lilac Cottage (19??)
The Riddle of the Caid Jewels (1969; a juvenile mystery?)

Short fiction (published in Clues during the late 1920s):