Down the Rabbit Hole

"I just want to say that in the Other Reality things happen to you that you will never experience in your reality."
- Eddy C. (De Griezelbus 3, 1996)

Back in October, I reviewed Mike Resnick's Stalking the Dragon: A Fable of Tonight (2009), in which John Justin Mallory, a licensed Private Eye from our reality, wanders an otherworldly Manhattan in hot pursuit of a stolen dragon on Valentine's Day – accompanied by an entourage as bizarre as the collection of characters that plodded down that yellow brick road. It's not entirely unlike Who Framed Roger Rabbit? (1988) set in the maddeningly bizarre world of Alice's Adventures in Wonderland (1865) and the result is an eclectic, but surprisingly pleasant, mishmash of genres and tropes.

I ended up liking it so much that I chucked Stalking the Unicorn: A Fable of Tonight (1987) in a digital shopping cart not long after putting up the review. 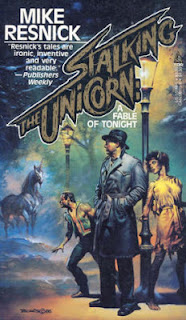 Stalking the Unicorn is where it all began for John J. Mallory. Or where it ended, depending from whose point of view you look at it. It's New Year’s Eve and Mallory's personal life and career has hit rock bottom. A prophetic image for anything within reach that contains alcohol. So when a green elf named Mürgenstürm turns up in his office with a job proposal, he isn't too surprise, but than again, with a gang of thugs banging on your door you can't be too picky about clients – especially ones who can pluck thousands of dollars from thin air (all scientific, of course).

In the alternate Manhattan, Mallory has to track down Larkspur, a rare unicorn that was put in Mürgenstürm's charge, and he has to find the animal before sunrise or the elves' guild will kill him for losing it! It's from here on out that story sets up a pattern that was picked up in Stalking the Dragon. Mallory wanders around the city, bumping into peculiar characters and unusual situations, but everything was just so much better done here. In retrospect, Dragon read more like a well-oiled machine while Unicorn had rougher edges that suited the story. It's a hardboiled fantasy, after all! I also enjoyed the bizarre characters a lot more and thought the book as a whole was better written. How can you not love a famous detective and a master criminal locked in a never-ending power struggle over a chessboard? Or how both worlds connect and explain such things as subway tokens and the rate of unsolved crimes.

Unicorn is more a joyride through fantasyland as oppose to a proper mystery, but who cares, we have the quintessential image of the tough gumshoe battling a demonic power known as The Grundy in a race for a mythical horse and a last chance at obtaining a one-way ticket home. It's a well-written, fun trip outside the ordinary like this that makes it worth taking a break from those old-time detective stories.

By the way, I wonder if Resnick (unknowingly?) gave an explanation for this line from J.M.Barrie's Peter Pan (1911):

If we take Grundy's explanation on influences and apply it to a certain event towards the end of the story, than it becomes very likely that Resnick is somehow responsible for the drunken, fornicating fairies and whatnot stumbling around in a classic children's story. It was probably done with time travel. I'm sure Resnick could enlighten us, if he's not having dinner at the Restaurant at the End of the Universe or taking a stroll around Ancient Rome. ;)