"Of all the ghosts, the ghosts of our old loves are the worst."
- Sir Arthur Conan Doyle

If the Ghostbusters had been practicing their craft during the Dark Ages, they would've inevitably concluded that the abbey of St. Martin's-in-the-Marsh was situated in the middle of spook central. The region teems with tales of the ghost of Sir Geoffrey Mandeville, a feared robber baron in life, who prowls the Lincolnshire fens with a retinue of phantom horsemen after death – blasting their hunting horns with the ghost of their breath. 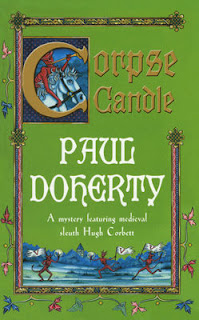 Naturally, the brothers of the monastery do not concern themselves with phantom horsemen from Hell, ghostly lights that foreshadows death and other superstitions that plague the locals. After all, they've more pressing matters on their hands: like exhuming and tearing down the burial mound in the Bloody Meadows that is said to contain the remains of an ancient king named Sigbert, who was martyred when he refused to renounce his faith. The plan is to erect a lavish guesthouse on the spot to attract pilgrims, but Abbot Stephen, who also happened to be a celebrated exorcist, considers the mound inviolable and refuses to give permission for its destruction. A decision that may have cost him his life!

One day, Abbot Stephen is stabbed to death in his private chamber, with the door and windows locked and secured from the inside, and King Edward I, who counted the abbot among his few friends, sends Sir Hugh Corbett and Ranulf-atta-Newgate to exorcise this demonic killer from the monastery.

Paul Doherty's Corpse Candle (2001) is much more a crime than a detective novel and characterization is more a focal point here than the actual plot. The revelation of the solution comes as Corbett and Ranulf slowly, but surely, undrape the abbot's past and even though you can anticipate snippets of the solution – it’s impossible to get the complete picture before Corbett does. It's not a bad plot, not bad at all, but it simply does not qualify as a detective story and the impossible situation was unnecessarily disappointing. I understand it was done to exclude any of the unsavory elements from outside the abbey, but by that same logic, shouldn't that also exclude anyone from the inside? So, either a trick was used to lock the door and/or windows from the outside, which can be done from either side of the grounds, or they didn't. I think this part of the story would've made more sense and been less of a disappointment if the door of Abbot Stephen's chamber had been ajar.

That being said, I enjoyed the story. It wasn't Doherty’s finest effort, but I enjoyed it. Doherty has a knack for poking and stirring a dormant era from its slumber and I begin to become interested in the relationship between Corbett, Ranulf and Edward I – and the effect the latter has on the friendship of the former two. Edward I seem to like the role of "the man behind the curtain" in these books and I want to see how it develops. There's also plenty of action, when Ranulf goes up against a local band of wolfheads. In short, what's not to like here if you're already a fan of the series?

Is it me or are my Doherty reviews getting very summary?


A list of all the Paul Doherty novels reviewed on this blog: