Here's to the Night

"Those who plot the destruction of others often fall themselves."
- Phaedrus.

I once read either an article or a review, which floated somewhere on the web, concerning historical mysteries and it mentioned in passing that ancient Rome, as a backdrop for these tales, has become one of the most well-trodden periods in history and that made a lot of sense – remembering their penchant for cloak-and-dagger politics and poisonous intrigues.

Take Emperor Nero, the John Rhode of the Ancient World, who ordered the construction of a particular ingenious death trap, a collapsible boat, to kill his mother Agrippina. After having failed to take his mother out, Nero simply dispatches a band of assassins and according to one of the stories, Agrippina ordered the mercenaries to bury a dagger in her womb. The stories practically write themselves! 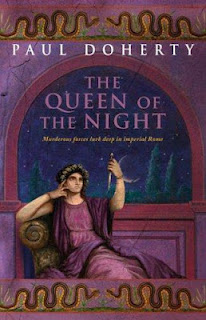 Paul Doherty's The Queen of the Night (2006) takes place in August, 314 AD, when Emperor Constantine and his mother, Empress Helena, took the western Roman empire from Emperor Maxentius and plan to snatch away the eastern territories from Emperor Licinius, but first they have to quench the flames of unrest that are licking at the homes of Rome’s powerful elite.

One part has to look on, helplessly, as their children are whisked away and held to ransom, while veterans of a small band of Constantine's army, lauded for trapping and cutting down a group of Picts, are brutally murdered and mutilated, one after another, according to the practices of their old enemies. Empress Helena puts Claudia, a secret agent, on the case, scouring for clues like a mouse scurrying for bits of food, but a third problem, much closer to home, also demands her attention. Her uncle Polybius disinterred the corpse of a perfectly preserved girl from his garden and it's assumed to be the remains of a Christian martyr.

More than enough twisted threads for a good yarn, however, The Queen of the Night, plot-wise, turned out to be one of the least challenging and unoriginal historical mysteries I have read from Doherty.

The perfectly preserved remains of the young woman hardly poses a challenge for any modern reader, especially ones specialized in detective stories, and eventually peters out. Just as easy is figuring out who masterminded the kidnapping and the only interesting part was how the strand of the army killings intertwined with the kidnappings. I really got the idea that Doherty half-assed the plot here, taking bits and pieces from his other novels, and resettled them in Imperial Rome – like the murdered veterans from The Slayers of Seth (2001).

The Queen of the Night is as readable as any of Doherty's other, and more successful, efforts, but the plot shows that he either had an off-day or feels more at home in the castle strewn landscapes of mediaeval England or the sun blasted deserts of ancient Egypt. For completists only.

I think that this was one of shortest reviews I have ever done.

A list of all the Paul Doherty novels reviewed on this blog: