The Unpleasantness at the Gambit Club

"A player surprised is half beaten."
- Proverb.

In previous postings dealing with that duet of gumshoes, the armchair bound Nero Wolfe and the quick-witted Archie Goodwin, I explained that my enjoyment of this series does not come from ingeniously contrived plots, which they seldom sport, but from the characters and spending a few hours in their company. However, it's always a treat, served as one of Fritz's opulent banquets, when Rex Stout put some thought and effort into his intrigues – making Gambit (1962) a noteworthy entry in the late-period corpus. 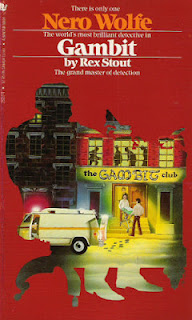 When Gambit opens, we find Nero Wolfe tearing the pages from a copy of a 3rd edition of Webster's dictionary, deeming it as "intolerably offensive," as Archie Goodwin ushers a prospective client into the office. Sally Blount has $22.000 in cash on her and wants Wolfe to prove her father innocent of the murder of Paul Jerin, a chess maven who was poisoned at the Gambit Club under peculiar circumstances. Paul Jerin was taking on twelve opponents, at once, under "blindfold" conditions, while alone in a room, separated from the other players, with only messengers moving between them to whisper the moves.

The twelve-man blindfold match was Matthew Blount's idea, who wanted to publicly humiliate Jerin and concocted a scheme, however, when Jerin is taking ill mid-match and dies in the hospital from arsenic poison – Blount is arrested as his murderer. After all, it was Blount who was kind enough to supply Jerin with his customary cup of hot chocolate, which appears to have been the container for the poison, but Sally refuses to believe that her father's plans had included murder and has very little faith in his attorney, Dan Kalmus, who's apparently in love with her mother. Wolfe and Goodwin have their work cut out for them!

I have to admit that the who-and howdunit angles weren't particular difficult to solve and most of their work consisted of prying loose a piece of information from Blount and Kalmus, which merely confirms a suspicion Wolfe and his readers have been harboring all along, but it's hard not to notice the effort Stout put into constructing this plot. I appreciate that, especially from this writer, and that's not something that can be said of all his books from this period. Even at gun point, I would be unable to supply even a synopsis of The Final Deduction (1961) or Please, Pass the Guilt (1973), and I don't think I have read them that long before I began blogging.

But how Wolfe wraps up this case does not only take a slice of the cake, but the whole thing and you know he has the appetite for it! I also wanted to glare daggers at the writing team who worked on the splendid A&E TV-series for not considering this book! Wolfe's gambit tears a page (another sacrilege against the printed word between the covers of this novel) from the playbook he used in The Doorbell Rang (1965) with the adaptation being even better and the last twenty-or-so minutes, in which Wolfe springs his trap, with one favorite scene following another favorite scene, easily makes it one of my all time favorite episodes from any detective series.

Wolfe mentioned in this last portion of the story that books could be written on the varieties of conduct of men in a pickle. If he even wants  to read such a book, I can recommend him Gambit by Rex Stout.