Over the past two-three months, I discussed only three good, notable locked room mystery novels and short stories, Theodore Roscoe's Z is for Zombie (1937), Hake Talbot's The Hangman's Handyman (1942) and Barry Ergang's "The Audiophile Murder Case" (1982), which were interspersed with a few weaker impossible crime tales – like Lewis Robinson's The General Goes Too Far (1936) and Richard Deming's "The Juarez Knife" (1948). So decided to peruse my stack for a locked room mystery as solid as brick and mortar, which lead to a potentially disastrous choice. You see, I settled on a strong recommendation from Jim. 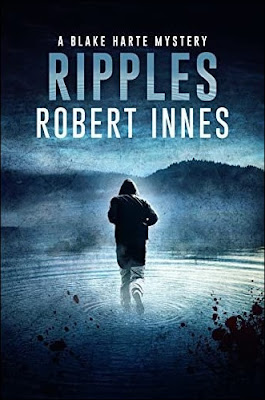 Back in 2018, I reviewed the sixth entry in Robert Innes' Detective Sergeant Blake Harte series, Flatline (2018), which Jim has been promoting and championing in his blog-series "Adventures in Self-Publishing." And not without reason! Robert Innes is an impossible crime specialist and not one who's satisfied with merely stabbing or shooting his imagined victims in a locked room.

Flatline has Blake Harte hospitalized to have his appendix removed, but has to get to work on a case when ominous figure, clad like a surgeon, begins to stalk the corridors and apparently left a dead drowned body inside an elevator without a damp patch – which had been stuck between floors for twenty-five minutes. The solution is as good and original as its premise. Unfortunately, the series has a huge drawback, if your taste in detective fiction runs in the same direction as mine. Blake Harte's private life has a big sway over the stories to the point where the series is a soap opera with puzzle plots. For example, Flatline is contentiously interrupted so Harte can argue with his boyfriend, Harrison Baxter, over why he's always working or discharging himself from the hospital. Not what you want to hear when your presented with such a tantalizing puzzle as a drowning inside a sealed, dry to the bone elevator. Same can be said about the third title.

Ripples (2017) opens with Harte getting two weeks off and his landlady, Jacqueline, immediately rising to the occasion to ensnare him and his then still friend, Harrison, to spend a week at a spa hotel. But, as soon as they arrive, the holiday becomes everything but a relaxing rest. Firstly, Harte's ex-boyfriend and his wife turn out to be among their fellow guests. Secondly, the Manor of the Lakes, Bed & Breakfast, is under troubled ownership.

Rupert and Polly Urquhart come from two warring families, "a modern day Romeo and Juliet," whose relatives have been fighting for half a century. Fifty years ago, the Urquharts bought an old, failing steam railway station owned by Lomax family and they were apparently under the assumption they would be kept on in some capacity, but they were essentially pushed out. So there was "all out warfare between the Lomaxes and the Urquharts" with "frequent vandalism, hate mail, fisticuffs on several occasions" and continued fifty years later with Polly getting disowned when she announced her engagement to Rupert – even trying to disrupt the marriage. And ever since they got married, a hooded figure is seen stalking the grounds of the hotel. Not everything is well within the Urquhart family either. Rupert has a older, domineering brother, Duncan, who goes out of his way to be unpleasant and "has about as much say in everything as he thinks he does." Duncan becomes the sole owner of the manor under their mother's will whose now dying of cancer in an upstairs room of the hotel. There's a saying in my country that every home has its cross (ieder huisje zijn kruisje), but Urquhart has enough crosses to start its own cemetery.

Setting all of this up takes the entire first-half of an already novella-length story with the lion share's going to the relationship between Harte and Harrison, which in any other contemporary mystery would not have boded well for the plot. I'm glad to report Innes delivered the goods in the second-half. And how!

Harte and Harrison see the hooded figure staring out over the lake at Duncan sitting in a boat, but what they witness next is absolutely impossible. Whoever is under the hoodie, it took a step towards the boat and then, somehow, without any visible means of support "walked across the surface of the water" – stabbing Duncan to death. By the time they got to the lake, the figure in the hoodie had "completely vanished" and "the victim was just floating in the lake." A scene that's almost as good and certainly as memorable as the levitation-murder in John Sladek's Black Aura (1974)! A beautifully posed impossible problem with some great clues and effective misdirection, which succeeded in keeping me away from the solution. I just wonder if the wrong trails I followed were intended as such. The whole setup of the water-walking act/murder strongly reminded me of another locked room mystery with a somewhat similar setup and startling impossibility (ROT13: gur Wbanguna Perrx GI-fcrpvny Gur Oynpx Pnanel). This impression didn't diminish when another impossibility to the murder came to light, but couldn't figure out how a version of that trick could have been put to use here. Was this done intentionally to mislead a poor, innocent eyed and good as gold locked room fanboy? Another possibility that kept me away from the solution vf gung rirelguvat, sebz gur zneevntr orgjrra Ehcreg naq Cbyyl gb gur Qhapna'f zheqre, jnf cneg bs n qrnqyl pbafcvenpl ba gur cneg bs gur Ybznkrf gb ertnva gurve ybat-ybfg naprfgeny ubzr guebhtu zneevntr naq gura vaurevgnapr-ol-zheqre. There appeared to be a strong clue supporting this possibility (“oevyyvnag shzoyrq unaqf npgvat gb ohl lbh fbzr zber gvzr”). Well, it actually turned out to be a pretty strong clue, but to a very different, much better kind of solution.

So when the time came to unfurl what really happened, it came as a genuine and thoroughly pleasant surprise, but not just as an original and inspired piece of trickery, but how subtly the murderer and motive were hidden. More importantly, I really appreciated how gur zheqre vf qrfvtarq gb qverpg gur ernqref nggragvba gb gur jngre-jnyxvat npg juvyr gur pehk bs gevpx gbbx cynpr evtug va sebag bs Unegr. Naq gura nyfb cbvag bhg gb gur ernqre gung gurer ner gjb ynxrf! Harte even asks the question why the murderer would "go to the trouble of setting up some massive illusion like that, where you know you've got people watching you?" This is the kind of cavalier attitude towards plotting John Dickson Carr would have applauded. And what the contemporary genre should aspire to be.

That all becomes even more impressive once you realize how much space the plot had to share with a budding romance. Ripples is, plot-wise, a short detective story with romance padding, but you have to endure one in order to enjoy the other. So your mileage with the series may vary depending on how much characterization your willing to wade through to get to the good parts. Fortunately, I'm more than willing to slop through swamps of characterization to get to an original, brilliantly-staged and executed impossible crime. So there's going to be an earnest attempt to get to Reach (2017), Spotlight (2017) and Skeletons (2018) before the end of the decade. Stay tuned!