Murder in Mandalay (1961) by Aster Berkhof

Back in 2020, I reviewed Een onmogelijke moord voor Markus (An Impossible Murder for Markus, 1969) by "Aster Berkhof," a pseudonym of Lode van den Bergh, who was a Flemish writer of children's literature, psychological novels, comedic stories and non-fiction – producing a bulky bibliography counting more than 100 novels. Berkhof debuted as a detective novelist with De heer in grijze mantel (The Gentleman in the Gray Cloak, 1944) and unwittingly earned him the dubious honor of being the last surviving Golden Age writer 76 years later when he passed away, aged 100, in 2020. A full century after the Golden Age began and 60 years after it ended! 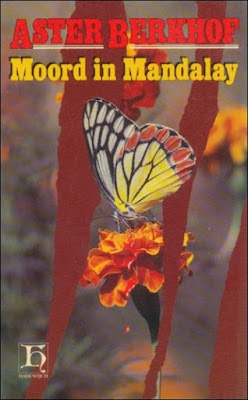 An Impossible Murder for Markus has all the trappings of a traditional, 1930s detective novel with the difference that every suspect has "a motive for not committing the murder." So not an impossible murder proper, but there's a minor locked room mystery tacked on at the end. And the whole plot was as see-through a a glass of water. Nonetheless, the storytelling, in spite of its international cast of characters, had that Flemish charm that has the same effect on a Dutchman as when Gomez hears Morticia speaking French. I added another, promising-sounding title to the big pile.

Moord in Mandalay (Murder in Mandalay, 1961), originally published as Commissars Rousseau in Birma (Commissioner Rousseau in Burma), is the only of Berkhof's mystery novels featuring his French detective, Commissioner Arsène Rousseau – a valued agent of the Parisian Judicial Police. Arsène Rousseau "is affectionately called the Nutcracker by his friends and by his adversaries with horror," but the nickname has nothing to do with Rousseau's methods. Rousseau is addicted to cracking open and eating hazelnuts. Something he does throughout the story. But hey, an eccentric tic comes with the territory of being a Great Detective.

Commissioner Arsène Rousseau has come to Mandalay, Burma (present-day Myanmar), to await the arrival of an internationally wanted jewel thief and checks himself into the Oriental Hotel under the name Gilbert Lepage. Posing as an eccentric scholar who collects strange butterflies, but, as he sits and wait, he becomes involved with the remnants of the British Empire that were left behind when Birma gained independence. Those who were left behind were either disillusioned or embittered. Colonel Rupert Creighton retreated into the barely existent, emptied-out St. James of Mandalay Club to reminiscence about the past, while Gerald White adopted the demeanor of "a poisonous jellyfish." White uses language as colorful as the setting to express his opinion about the locals, but also spews his gall about the young, recently arrived Lord James Attenborough. Jimmy, as he's likes to be called, preferred to party with the locals rather than drop in on the club. A transgression White could not overlook, but he absolutely loath Peter Stanmore. Another young, energetic man who lives in a stilt house on the creek and enjoys the company of his Burmese friends and neighbors. And he has the favor Elisabeth Yates. The daughter of the socially and emotionally withdrawn owner of the Oriental Hotel, Arthur Yates, who's not particular thrilled about them seeing each other either. So more than enough potential trouble for a detective story.

One evening, Arthur Yard is called on the house telephone by a hotel guest, Amery Holm, who gives a "stifled cry for help." So he informs a local policeman, Simon Baker, who go to the Holm's room where they find Peter Stanmore standing by the desk with his fingers to his lips. Amery Holm is apparently fast asleep, but Simon notices he's not breathing and discovers he has been stabbed. Stanmore flees the room like a bat out of hell. White is only to happy to tell the police later Stanmore had very likely been seeing the victim's wife, Monica Holm. So things begin to look very grave for Stanmore. 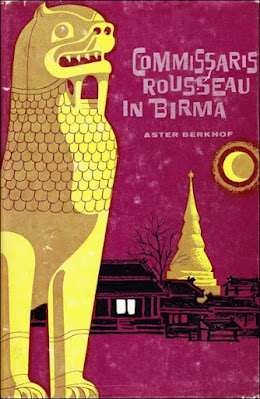 Commissioner Arsène Rousseau believes the young man could very well be innocent and comes out of hiding to act as an independent investigator on Stanmore's behalf, which he does by consuming hazelnuts, crawling around the crime scene and racking up an enormous telephone bill – calling every corner of the world to get information. Amery Holm survived an airplane crash, but the accident bound him to a wheelchair and became strange, hermit-like creature who locked himself away in hotels around the world. Rousseau compares the murder to "a game of chess in which one piece is on the equator and the other on the North pool," but has to wait patiently for the answer to be send back to him by telegram. I should also give a mention to Simon Baker's Nepalese aide-de-camp, simply called "Gurkha," who was brief highlight of the story. A man who looked like "a Tartaar plunderer" and his head contained the only reliable map of the maze-like street system of Mandalay where "nobody could tell where the alleyways ended and the private domain began." I feel like he should have been a recurring series-character instead of being wasted in this one-off.

So, as you can probably tell by now, Murder in Mandalay confirmed what I suspected after reading An Impossible Murder for Markus: Berkhof was a better storyteller than plotter.

Murder in Mandalay falls squarely into the category of the regional mysteries with exotic locations, which was a specialty of writers like Todd Downing, Elspeth Huxley and Arthur W. Upfield. The colorful scenery and social upheaval of post-colonial Burma is what really catches the eye here with on the one hand the remnants of the British clinging to a past that has already began to fade and deteriorate. And, on the other hand, there are attempts by the new, independent Burmese government to give Mandalay some of the prestige of London and Paris by renovating a theater to stage Puccini's La bohème. That performance provides the story with a good, memorable scene and the only substantial clue. But where Murder in Mandalay differs from the works of writers like Huxley and Upfield, is that Berkhof didn't succeed in crafting a plot or imagining a crime that felt indigenous to post-colonial Burma. Huxley and Upfield's detective novels often feel like they could not have taken place anywhere else except in Africa and Australia.

The plot of Murder in Mandalay is an uninspired and even of a lesser quality than the transparent An Impossible Murder for Markus, because this time Berkhof withheld some important information until the last minute. You can never piece together the (full) solution yourself. When the explanation came, it felt like a clumsy imitation of Agatha Christie (ROT13: frperg ybiref cybggvat zheqre naq evttvat hc nyvovf jvgu bar bs gur zheqreref svefg trggvat rkbarengrq orsber orvat rkcbfrq) with a feeble twist (gurl jrer hfvat rnpu bguref jvgu bar xvyyvat gur bgure va gur ynfg npg).

So, plot-wise, there's precious little here to recommend to the traditional, plot-loving detective fan, but I didn't dislike it. Just like An Impossible Murder for Markus, Berkhof's Murder in Mandalay has its charms of a long-gone world that even in its own time was dominated by remnants of a previous era. In spite of its weak plot, Murder in Mandalay painted a world you can get lost in for a few hours on a lazy summer afternoon. But you've not seen the last of Berkhof on my blog. I'm already eyeing a copy of Inspecteur Markus in Marokko (Inspector in Morocco, 1955), which apparently has Markus investigating a murder in a desert fortress with the members of the French Foreign Legion as suspects. Yes, Berkhof gets a third shot for just having been being Flemish. We treat them a little better than even our Anglosphere friends.