Dermot Morrah was a British journalist for The Times, chiefly as an editorial writer, but was best-known during his lifetime as an expert on heraldry, genealogy and the Royal family who acted as an assistant on royal ceremonial occasions – notably being an aide at the coronation of Queen Elizabeth II. Morrah reportedly had a friendly relationship with the Queen Mother, wrote speeches for George VI during World War II and a book on the early life of Prince Charles. There is, however, a biographical detail curiously absent from a lot of online sources like his obituary and wikipedia page. 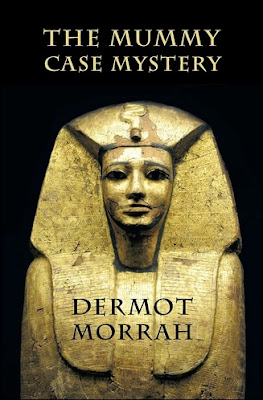 Morrah authored a donnish detective novel in the humorous, high spirited tradition of Edmund Crispin and Michael Innes, but The Mummy Case Mystery (1933) predated Innes' Death at the President's Lodging (1936). A book that has been credited with being the cradle of the donnish detective story. And preceded Crispin's The Case of the Gilded Fly (1944) by more than a decade. More importantly, Morrah was as good as his more illustrious literary descendants. So let's unpack and unwrap this mummy case!

Dr. Peter Benchley, Professor of Egyptology at Beaufort College, Oxford, is a research chemist turned Egyptologist and made his name with his "remarkable theory that the Greek wine god, Dionysos, could be identified with a spirit of vegetation worshipped in Lower Egypt at the time of Twelfth Dynasty" – a thesis fully set forth in his lifework, Dionysos at Memphis (1910). But the theory had a well-known, imminent detractor. A Russian-born Egyptologist, Feodor Bonoff, aggressively challenged Benchley's theory and resulted in "a warfare of print that raged for twelve years in learned periodicals." So it was unexpected when Benchley admitted defeat, buried the hatchet with Bonoff and even bought one of his valuable, very special mummies. The mummy of King Pepi I. Reputedly, the oldest Royal mummy in existence. And the long-dead king gets one last hurrah during the Beaufort College Commemoration Ball at the end of the term.

During the festivities, two young men in evening dress and top hats wheeled in a bier with a bulky coffin on it ("...old Benchley's mummy") while chanting phrases from "the funeral and penitential liturgies of several religions." A mock funeral procession was "the obvious thing to do with a mummy," but the rituals of Oxford doesn't allow for ragging at the commem ball. So the two were given a tour of the River Cherwell for their trouble and the mummy returned to Benchley's private rooms. Only to discover the following morning they gave false names to the Dean and likely not members of the Corpus Christi College. But has that anything to do with the tragedy that occurred on the same night?

While everyone was dancing, the fire alarm sprang to life ("save the hall, save the hall") and the fire is raging in Benchley's locked bedroom, which gutted the whole room and it took twenty minutes to find "a charred and shapeless mass" among the debris – identifiable as the late Benchley by a wristwatch and a bunch of keys. Beaufort College maintained its medieval right to form its own jury from the Provost and Fellows of the college to hold an inquest and they return a verdict of accidental death. Not everyone's satisfied with the verdict. 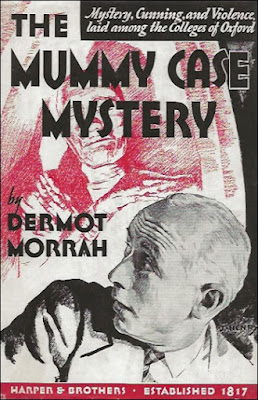 Professors Denys Sargent and Humphrey Considine, a law expert and Assyriologist, decide on a spot of "amateur dabbling in detective work" and use their position as Benchley's executors as a front. They go to work with all the enthusiasm, humor and high spirits expected from the best amateur detectives, but Chapter 4 ("The Scout") stands out as it can be directly linked to the early forensic detective fiction of R. Austin Freeman, Eric Wood and the Radfords. Considine, "trained in more than expedition to the ruins of Babylon," subjects the fire ravaged rooms to an archaeological excavation with "systematic thoroughness." The place is divided in trenches and they systematically sieve through the ashes in the hope of finding some clues. But most of their work comprises of gathering information and theory as they consider various suspects and potential motives.

Firstly, there's the American millionaire and collector, Luther Y. van Ditten, who wanted to buy the mummy from Benchley and why he was there on the night of the ball. Every seasoned mystery readers knows collectors can be classed as "a special sort of lunatic" who would gloat in private over a unique item nobody else got. Miss Daphne Carrothers is the niece of the late Egyptologist, but her uncle objected strongly to her engagement to a perfectly respectable young man, Mark Devereux, who's a commoner of New College. Benchley even added a codicil to his will placing his niece under guardianship of a court and wishes it would not grant permission for their marriage. And finally there's the long-time, hermit-like rival, Professor Bonoff, in addition to several dons who wander the hallowed halls of the college. Just as important as the question of who-and whydunit, is whose charred remains were actually found in Benchley's bedroom. Was it Benchley? But then what happened to the mummy? Or vice versa! And who were those two jokers?

Morrah laid out a pretty puzzle in The Mummy Case Mystery and the almost immaculate clueing practically spelled out the solution to the observant reader, which (admittedly) became next to impossible to miss as the story progressed – something you might suspect from the outset. A solution dulled by the passage of time. However, it turned out only to be only thrust of the overall plot with the ending having considerably more weight to it than initially suspected. This can be entirely put down to the highly unusual motivation of the murderer to put the whole, intricate and risky plan into motion. One that was almost ruined by the cussedness of all things general, but provided the story with another strong hint of what, sort of, was going on. Something you can hardly take serious had it not been for Morrah's tongue being firmly planted in his cheek when he wrote the book. What did caught me by complete surprise is how the case was resolved. Well, I honestly didn't see that turn of events coming! I think even today that ending would be considered original.

The Mummy Case Mystery can now be counted among my favorite academic mysteries. A mystery as eccentric as it's intelligent, driven by "pure academic curiosity," but possessing enough humor to escape the dangers of taking itself too seriously. Morrah penned such a fun, enjoyable little detective story, you almost forget he glossed over one, or two, details in the summation of the case. Such as clearing up whether or not it was a locked room murder (a routine solution was provided in case it's one) or explaining how, exactly, the room was torched. I don't think (ROT13) evttvat hc “n pbagencgvba jvgu na nynez pybpx naq n pnaqyr” fully answers that question. But, when you remember those minor smudges, you're likely to either continue to overlook them or forgive them altogether. Smudges that can simply be written off against everything else that makes The Mummy Case Mystery one of the thoroughly enjoyable, delightfully British and ambitiously plotted academic mysteries from the 1930s.