Theodore Roscoe was an American biographer, naval historian, novelist and penned a ton of short stories and serials for periodicals such as Argosy, Action Stories, Far East Adventure Stories, Flynn's Detective Fiction and Wings – fabricating quality pulp fiction with his lush tales of exotic adventure, far-away wars and bizarre murder. Roscoe is best known to detective fans as the author of two imaginative, highly regarded locked room mysteries. Murder on the Way! (1935) is an otherworldly flight-of-fancy set in a decayed, moldering chateau on Haiti during a zombie scare and I'll Grind Their Bones (1936) is a speculative, pulp-style thriller that takes a peek at the coming World War. 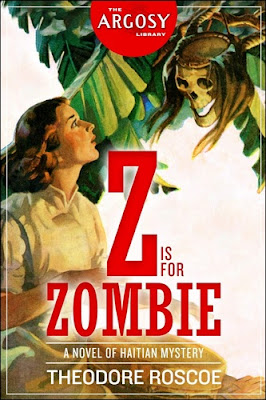 Until a few years ago, Roscoe's contributions to the magazine publications of his day had been mostly out-of-print and uncollected for decades. Something that changed all of the sudden around 2017 when a number of his short stories were collected and serials republished as full-fledged novels. And those reprints revealed Roscoe's contribution to the detective story had extended beyond two locked room serials.

I reviewed Roscoe's Four Corners, vol. 1 (2015), a collection of longish short stories, in which the citizens of Four Corners grapple with invading gangs of criminals, bank robbers, small-town intrigue and the occasional impossible crime – e.g. "I Was the Kid with the Drum" (1937). The Green Capsule confirmed there's more in Four Corners, vol. 2 (2020) with his review of "Ghoul's Paradise" (1938) and that story has "impossibilities abound." Jim, of The Invisible Event, discussed another one of Roscoe's long-forgotten detective serials in 2018, entitled Z is for Zombie (1937), which returned to the "whisper of Haitian drums and a wizardish hint of resurrection" of Murder on the Way! But, as Jim noted, it's not merely "a simple, lazy retread" of his most-well known novel. Roscoe spun an entirely different story out of the premise of a zombie scare on Haiti and demonstrated why he was the John Dickson Carr of the pulps.

Z is for Zombie was originally serialized from February 6 to March 13, 1937, in Argosy and reprinted in 2019 by Steeger Books (formerly Altus Press) as part of their Argosy Library reprint series. So let's dig up some zombies and murderers!

Dr. John Ranier is a man who did the rags to riches story in reverse. Before the Great Depression, Ranier had his own medical practice on Park Avenue where he performed "wonderful operations on wonderful millionaires." That all came to an end when the stock market crashed. So now he's a humble ship's doctor on the S.S. Cacique, Atlantic-Caribbean Line, dispensing seasick pills and "tomato juice to soused tourists who wanted to see the world through the bottom of a gin glass." Z is for Zombie opens with Ranier sitting in a Haitian waterfront dive when a taffy-haired Dutchman, or German, tosses him outside without an apparent reason.

As an aside, Jim commented in his review how Roscoe couldn't make up his mind whether Leo Haarman is Dutch or German, but, as a Dutchman, I began to sweat nervously. Roscoe evidently knew we're Germanic and, if this ever leaks out, it potentially could undo centuries of hard work in convincing the English we're not like the rest of mainland Europe – like physically distancing ourselves from the rest of the continent with our Water Line defenses. That was a lot of work. So don't tell them. 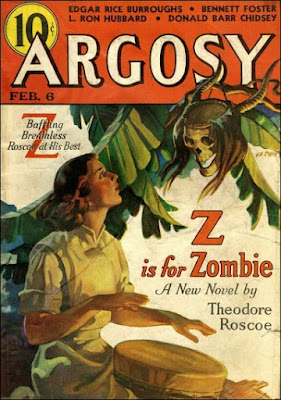 Anyway, Ranier stumbles back into the bar to give Haarman a piece of his mind and fists, but decides against it, gets a drink and observes the German (or Dutchman) as a group of cruise passengers poured into the bar. A party comprising of "an Irish sugar merchant, a Brooklyn mug, an authority on insects, a peroxide blonde, a swart Italian," who drink and discuss voodoo and "the un-dead dead who walk the jungles on silent feet" with their Haitian tour guide. Haarman was sitting at the far end of the table by himself, "pretty fogged," but nobody had come near him before they discovered he had been wounded and dying from a knife-wound to the back. So body could have stabbed him, but there's another impossibility to the stabbing. What happened to the knife? Whoever stabbed Haarman unnoticed and then made blade vanish into thin air "was not only a magician but a chap who meant business." This is impossible stabbing in a Haitian waterfront hole is as normal as the story gets. And what follows is best describes as Joel Townsley Rogers' The Red Right Hand (1945) done right or Fredric Brown's Night of the Jabberwock (1950), but darker and pulpier.

They transport the dying Haarman to the only hospital nearby run by a Dr. Eberhardt, a German, who has been there many years taking care of the natives and conducting his private experiments – believing "he could revive dead cells with adrenaline." But, when they arrive, they find that Dr. Eberhardt has gone missing, his laboratory wrecked and his adopted niece, Laïs Engles, recognizes the dying Haarman as someone she knew. Someone who had died and been buried on Haiti over fourteen years ago. This comes with a fantastical story of a secretive, long-forgotten World War I mission up the Amazon River in South America, which got lost and (somehow) ended up in Haiti carrying "the mauve death from Brazil." A disease that wiped out every member of the mission except the then child, Laïs. She can prove Haarman is the German sailor who died there in the hospital over a decade ago.

Something is rotten on the island of Haiti and what ensues is a typically, pulp-style merry-go-round the misty, overgrown cemeteries as the dead apparently abandoned their graves and members of cruise party begin to drop like flies. That takes its toll on members of the group. Meanwhile, the natives are getting angry over the rumor "a zombie is loose" and a mob is gathering in the background to storm the hospital. So most of this macabre night full of corpses and rumors of the undead to the "low, sullen throbbing of wooden drums." Roscoe really knew how to set the scene!

Z is for Zombie is inevitable going to be compared to its illustrious predecessor, but it's hardly a fair one as Murder on the Way! is undoubtedly the better and more memorable of the two. However, the reason is not because the former is actually of lesser quality, but that Murder on the Way! is a loopy roller coaster of insanity while Z is for Zombie is a haunted house ride. One is more exciting and memorable than the other, but therefore not necessarily bad. Surprisingly, I agree with Jim that only serious flaw of the story is its repetitiveness that can, very likely, be blamed on it originally been published as a serial and the characters needed to retrace their steps to help refresh the reader's memory – which a good editor could easily fix. It would improve the pace of the story and move it closer, in terms of overall quality, to Murder on the Way! But disagree with Jim about the impossible stabbing. Sure, the trick was not terribly complicated or even all that original, but it was a lot more practical than the theory is was trying to work out. I worked on the assumption the vanishing knife was a byproduct of the trick the murderer used to cloak the knife thrust. So I figured the murderer found a way to drive, or shoot, a blade without a handle deep into the victim's back, which would have rendered the blade completely invisible. You can turn the bar inside out without finding it. When the body apparently walked out of the hospital, I thought I was on the right track, because a medical examination would have revealed the blade. Roscoe came up with trick that was a little more workable.

So, to keep a long story short, Z is for Zombie is a glorious piece of pulp with an ending that lives up to its premise and the best those much maligned pulp magazines had to offer. Roscoe's was an unapologetic, entertaining fiction writer whose intricately-plotted, darkly written (locked room) mysteries can only be likened to John Dickson Carr and Hake Talbot. Z is for Zombie is a fine example of the best the pulps had to offer. Recommended without reservations!