Man of Steel: "The Super-Key to Fort Superman" (1958) by Jerry Coleman

So, as you've probably noticed, I've been on a locked room mystery bender since February and you can blame that on the publication of Brian Skupin's Locked Room Murders: Supplement (2019) coinciding with the holidays, which significantly increased the size of my wishlist and to-be-read pile – glutted with more impossible crime stories than usual. I'm now almost done with trimming down my stack of newly acquired locked room and impossible crime novels. You can expect a little more variety to return by the end of the month. 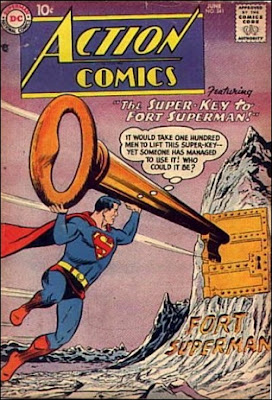 One of the more peculiar titles listed in Skupin's Locked Room Murders: Supplement is entry 2215, "The Super-Key of Fort Superman," written by Jerry Coleman and published in Action Comics, #241, 1958. A 12-page comic book story in which Superman has to find out who, and how, someone gained access to the "locked and impenetrable" Fortress of Solitude.

The Fortress of Solitude is hidden "deep in the core of a mountainside" in "the desolate arctic waste" with the only entrance being a massive door, "sheltered from view by jutting rocks," which can only be opened with "a super-key that weighs tons" – a ponderous key only Superman can lift. There's no one on Earth who can get through "the solid rock out of which it is hewn." A quiet, solitary place where he "conducts incredible experiments, keeps strange trophies and pursues astounding hobbies." Sound like the next best thing to a Batcave, but the Fortress of Solitude is more like the lair of very dedicated stalker or serial killer.

Superman has rooms, or shrines, dedicated to his friends, Lois Lane, Jimmy Olsen and Batman, complete with wax dummy replicas, mementos and specially made gifts.

A personally strung-together rope of pearls for Lois, a handmade sports car for Jimmy and a robot-detective for Batman, but they'll only receive these gifts if, not when, Superman dies. What a dick! Lois and Jimmy will probably have been slumbering in their graves for decades by the time he gets a wrinkle or gray hair! Why not give Batman that super advanced, robot-detective to fight crime now? Apparently, Superman is also an abusive animal hoarder with a private, inter-planetary zoo, hoarded from across the galaxies, crammed inside tiny cages – one panel showing several, large-sized alien animals in crate-sized cages. Well, at the very least he keeps the cages in a "locked chamber" and the floors aren't littered with rotting, half-cannibalized carcasses of former pets. So there's that, I suppose.

Anyway, one day, when Superman returns to the Fortress of Solitude, he discovers someone has entered the fortress and left a taunting message on the wall, "I can enter and leave at will! Who am I? How can I do it? I dare you to find out!" This happens another two times with a third message saying, "Kent is Superman." No one else, except Superman, could have lifted the giant key, moved the door or plunge through fifty feet of solid rock. These are the only ways in, or out, of the fortress.

Superman briefly considers some possible solutions. Such as one of his inter-planetary pets "concealing superhuman powers and intelligence" or "that strange apparatus made by Luthor," which can summon beings from the fourth dimension, but the solution unveils a legitimate locked room-trick cleverly modeled around an idea nearly as old as recorded history. And it worked surprisingly well! I expected someone had simply crawled through the large, gaping keyhole, but the solution turned out to be so much better and the identity of Superman's "most cunning opponent" was a nice touch to the who-and why of the plot. A victory for brains over brawn!

I read "The Super-Key to Fort Superman" on the assumption it would be nothing more than an amusing curiosity of the impossible crime story, but didn't expect I would end up liking it. But here we are. More than worth the five minutes it takes to read the story.
Geplaatst door TomCat on 3/14/2020