Earlier this month, Dean Street Press revived three obscure, long out-of-print novels by a forgotten mystery writing couple, Edwin and Mona A. Radford, who collaborated on thirty-eight forensic, puzzle-driven detective novels that were originally published between 1944 and 1972 – most of them starring their series-detective, Dr. Harry Manson. A detective with the unique dual role of being "in charge of the Crime Laboratory at Scotland Yard" as "the chief of the Homicide Squad." 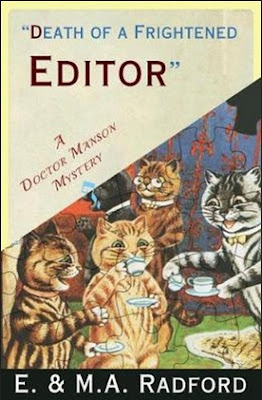 Back in February, in anticipation of these releases, I reviewed the Radford's nostalgic adieu to the detective story's Golden Age, Death and the Professor (1961). A standalone detective novel presented as a collection of short (locked room) stories, but the nostalgia came at the expense of the ingenuity and originality that can be found in their Dr. Manson novels (e.g. Who Killed Dick Whittington?, 1947). So my next stop was going to be, unsurprisingly, the reprint of one of the Radford's impossible crime novels, Death of a Frightened Editor (1959). I was not disappointed.

Death of a Frightened Editor is the eleventh entry in the Dr. Harry Manson series and revolves around an inexplicable poisoning aboard the first-class Pullman coach of the 5.20 Victoria to Brighton train.

Over a stretch of six months, a group of seven men and one woman traveled together in the same coach, occupying the same seats, five nights a week and the Pullman had slowly become "a traveling club" – where "conversation was mutual" and "drinks were stood round by round." A mixed company made up of a dreary general manager of an insurance office, Marriott Edgar. A wealthy and ponderous stockbroker, William Phillips. A charity worker and a prominent executive of the Unmarried Mothers' Association, Mrs. Freda Harrison. A manager of the share-buying department of a great bank, Alfred Starmer. A well-known crime reporter for a London morning paper, Edwin Crispin (no relation of Edmund Crispin). An eminent Harley Street surgeon, Thomas Betterton, and a jolly Cockney bookmaker, Honest Sam Mackie. The group is rounded out by the soon-to-be-dead Alexis Mortensen.

Mortensen is the editor and owner of Society, "a scurrilous rag-bag of gossip and pictures," whose extremely rigid body is found inside the locked lavatory of the coach. Fortunately, Dr. Manson was traveling in the next first-class coach and immediately takes charge of the case.

The cause of death is strychnine poisoning, but suicide is unlikely, because "there are other and less painful means," which is an assumption cemented by such clues as a stolen keyring and a small, crumpled piece of paper found on the lavatory floor – convincing Dr. Manson the editor had been poisoned. There's just one problem. Strychnine "acts within a quarter-of-an-hour" and Mortensen "had gone double that time without having taken anything in food or drink."

So murder appears to be a complete impossibility with the additional complication that it's "exceedingly hard to obtain." But the how is merely a single piece of the puzzle.

The whole police apparatus, headed by Dr. Manson, is set in motion to disentangle a procession of double and false-identities, play a game of three-card monte with private safes and bank deposits boxes and digging out a cache of long-buried secrets and potential motives – all tied to the reason why the victim had acted so frightened leading up to his death. There are more points that need consideration. Such as a free-for-all bottle of Bismuth that was passed around the coach, a string of unsolved burglaries and the mysterious woman who had been secretly living with the victim.

Slowly, but surely, piece by piece, the murder and its background are reconstructed until the full picture emerges. Only downside is that certain pieces of vital information arrived a little late to the story. Nonetheless, the step-by-step reconstruction, eliminating possibilities and testing theories makes Death of a Frightened Editor a pleasantly complex and engaging detective story with a well-done impossible poisoning.

Death of a Frightened Editor shows Edwin Radford was "an avid reader" of R. Austin Freeman's Dr. John Thorndyke mysteries with its use of forensic science to find the murderer, but the solution to the impossible murder is pure John Dickson Carr. A clever, ultimately simplistic, twist on a poisoning-trick that I've only seen once before. And made for a great play on the Carrian blinkin' cussedness of things in general. I don't think many readers will have a problem with working out the motive or how that tied-in with the gossip columns in Society and the secreted content in the deposit boxes, but getting there made for some engaging and fun police work. And the murderer was a nice surprise. I didn't (quite) expect that person to have been the one who gave Mortensen the poison.

So, on a whole, Death of a Frightened Editor is a well-written detective novel with a tricky plot and a good impossible crime, but the clueing was a little shaky and this is probably why the Radford's didn't include a single challenge to the reader. Regardless, the murder-among-commuters plot makes Death of a Frightened Editor standout as an original take on the train-set mystery novel and that alone makes it worth a read.

By the way, Brian Skupin's Locked Room Murders: Supplement (2019) lists another impossible crime novel by the Radford's, Trunk Call to Murder (1968), in which safes are mysteriously looted. Just throwing that out there.
Geplaatst door TomCat on 3/26/2020