Back in January, I reviewed Zaregoto series: kubikiri saikuru (Zaregoto, Book 1: The Kubikiri Cycle, 2002) by the palindromic "NisiOisiN," the open, stylized penname of Nisio Isin, who produced nine so-called "Light Novels" (Young Adult) in the fanciful, off-beat Zaregoto series – complete with manga artwork depicting the various characters from the stories. The Kubikiri Cycle is a traditionally-structured mystery novel centering on a group of people stuck on an island with someone who has a talent for murder. There are even two impossible crimes and the solution to the murder in the locked storage room is a paragon of the locked room story! 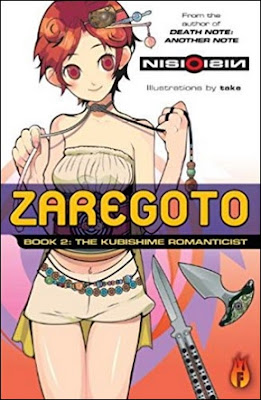 Zaregoto series: kubishime romanchisuto (Zaregoto, Book 2: The Kubishime Romanticist, 2002) is the followup to The Kubikiri Cycle and takes place a mere month after the murders on Wet Crow's Feather Island, but the plot is markedly less conventional.

The nameless narrator of the series is an apathetic 19-year-old university student, nicknamed Ii-chan, who considers himself "a broken thing" and developed a "go-with-the-flow type" of personality in order to avoid any kind of conflict or disagreement – someone who really prefers to be "a passive bystander." So he often downplays his own abilities and say whatever it takes to keep things as uncomplicated as possible, which also makes him an unreliable narrator. But a compelling one at that.

The Kubishime Romanticist opens in one of the practically deserted dining halls of Rokumeikan Private University. Ii-chan is grappling with his bowl of kimchee when a classmate, Aoii Mikoko, plops down in front of him, but he's pretty bad at even remembering personal encounters with people and is afraid "this might prove to be a painful encounter." And he's not entirely wrong.

Ii-chan and Mikoko-chan not only take the same core subjects, but they were in the same foreign language classes, who had been paired up in English class, which meant they had met and talked a number of time – only he couldn't remember her at all. Mikoko-chan is not difficult to remember, because she the hyper personality of child addicted to pixie sticks. She invites Ii-chan to a small, intimate birthday party of another one of their classmates, Emoto Tomoe, together with two of their fellow students, Atemiya Muimi and Usami Akiharu. All four of them are long-time friends. Naturally, Ii-chan doesn't remember anyone of them and doesn't want to intrude, because "a fifth person would throw off the balance," but his don't-rock-the-boat attitude makes him accept the invitation.

So why would a close, intimate circle of friends invite a solitary, anti-social outsider, like Ii-chan, to a birthday party? Obviously, Mikoko-chan likes Ii-chan, but he misses all the cues. Or did he? You can never be exactly sure with him.

Anyway, the birthday party, small as it was, can be considered a success, but the following morning, he finds two police-detectives of the Kyoto Police First Investigative on his doorstep. Emoto Tomoe had been murdered after the party ended and her four classmates are the prime suspects, but all four appeared to lack a proper motive and they all have alibis, of which the strongest is the double alibi of Ii-chan and Mikoko-chan – who returned to his apartment and the neighbor vouched for them. So who murdered the student mere hours after her twentieth birthday?

If you haven't read The Kubishime Romanticist, you would probably assume from all of this that the book is a fairly conventionally-structured detective novel, but the murder is not the focal point of the story. Ii-chan and his interactions with the other characters in the story are the focal point. And that brings us to one of the more unusual characters he interacts with. 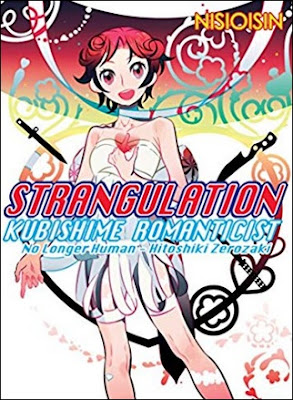 Kyoto is plagued by a serial killer, christened "The Prowler," who has murdered and dismembered six random people when the story opened, adding six more to his body count before the end, but these killings are largely irrelevant to the plot. However, what's important is that Ii-chan has an unexpected encounter with this elusive serial killer, Zerozaki Hitoshiki. Ii-chan and Zerozaki turn out to be "the same breed," like "mirror reflections of one another," but with the difference that one of them is a passive bystander and the other an active serial killer – which gives them something to talk about. They even have a philosophical conversation in a karaoke bar, of all places, about their damaged personalities and the murders.

So here we have a protagonist, in what's still essentially a mystery novel, musing philosophically with a murderer about life, death and his crimes. Something I have always associated with the psychological crime stories and police procedural from continental Europe. This is something you would expect from a German krimi-series, such as Derrick, or Tim Krabbé's overrated novella Het gouden ei (The Golden Egg, 1984). But not from a zany, manga-esque Japanese light novel populated with quirky, anime-like characters.

Nosing around when "one of his classmates is murdered" and maintaining "friendly relations with serial killers" brings Aikawa Jun back in his life. Aikawa Jun is known as mankind's greatest private contractor, a jack-of-all-trade, who turned her hands to "walking dogs, solving locked-room murder mysteries or catching mass murderers." As long as there's buck to be earned, she would take the job. And what she wanted was The Prowler.

The Kubishime Romanticist is, plot-wise, a step down from the brilliant, traditionally-structured The Kubikiri Cycle, but the plot-threads surrounding the murdered university students was still pretty solid with a good alibi-trick and a nice play on the least-likely-suspect. I found one aspect of the second, quasi-locked room murder a little hard to swallow, which, considering the solution, could have been easily remedied. However, the plot stuck nicely together for a somewhat unconventional, character-focused mystery novel. And I really liked it. I'm also becoming fond of that cold, hardhearted narrator and would like to read more, if more of them get translated.

Well, here's where I can end this review with some good news about the Zaregoto series. The Kubikiri Cycle and The Kubishime Romanticist were originally translated and published by the now defunct Dey Rey, but Vertical has revised and reissued them under slightly altered book-titles, Decapitation: Kubikiri Cycle and Strangulations: Kubishime Romanticist. Vertical is continuing the series with a brand new translation of the third book, Zaregoto series: kubitsuri high school (Zaregoto series, Book 3: Hanging High School, 2002), which is scheduled for release on September 24, 2019! So I will try to get to Hanging High School before the end of the year.
Geplaatst door TomCat on 7/25/2019