Several weeks ago, Christian Henriksson of Mysteries, Short and Sweet published a blog-post, titled "What's Missing? Wishes and Hopes," which went over several hypothetical short story collections he would like to see published – preferably "in the near future." One particular item on his wish list was a collection of impossible crime stories by Arthur Porges. 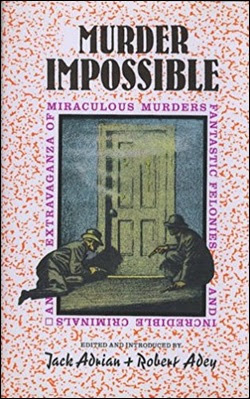 I mentioned in the comment-section that Richard Simms, who runs the Arthur Porges Fan Site and Richard Simms Publications, commented on my review of No Killer Has Wings: The Casebook of Dr. Joel Hoffman (2017) that he was considering doing a volume of Ulysses Price Middlebie stories. A relatively short-lived series consisting of eleven short stories, published between 1962 and 1975, of which nine or ten are locked room mysteries.

Less than a week later, I found an email in my inbox from Simms with the announcement that he was "working on another volume of Arthur Porges stories," entitled These Daisies Told: The Casebook of Professor Ulysses Price Middlebie (2018), which gathers all eleven Middlebie stories and one of them is rarity – as it only appeared in "a supplement of The Los Angeles Times" called This Week. Simms is aiming to release the book in August.

So, in anticipation of this upcoming collection of impossible crime stories, I decided to re-read the only easily accessible tale from this series.

"Coffee Break" was originally published in the July 1964 issue of Alfred Hitchcock's Mystery Magazine and collected by Jack Adrian and Robert Adey in their locked room anthology Murder Impossible: An Extravaganza of Miraculous Murders, Fantastic Felonies & Incredible Criminals (1990). Adey accurately described Porges many series-characters not as traditional detectives characters, but simply as problem-solvers, who tend to be “quiet little men with academic backgrounds" to "whom the perplexed and pressured police officers brought apparently unsolvable problems." A description fitting two of Porges' most well-known creations, Cyriack Skinner Grey and Dr. Joel Hoffman, but also fits the lesser-known, often overlooked Professor Middlebie.

Ulysses Price Middlebie is a Professor Emeritus of the History and Philosophy of Science and "a sometime crime consultant" to Sergeant Black, who's daily workload appear to consist of inexplicable or even impossible cases, which is why he regularly picks the brain of Professor Middlebie – such as in the case of Cyrus Denning's apparent suicide. However, the police sergeant suspects this to be a case of murder, but the only problem is that murder is a double-edged impossibility involving a bolted room and an unimpeachable alibi.

Denning was a bachelor of sixty-two, who "fancies himself a scientist and inventor," and had converted a lakeside cabin into a workroom with a laboratory. He supposedly poisoned himself with a cyanide inside this converted cabin when the only door, which tightly fitted into its frame, was secured from the inside with "a heavy brass bolt." And the only window in the room had been nailed shut for years and the putty around the window panes was old, crumbly, dry and hard. What drives home the idea of suicide is that nobody had been near him for at least half an hour before his death in combination with two items found besides the dead man: a poisoned cup of piping-hot coffee and a burning cigarette on the edge of an ashtray.

So nobody could have entered the cabin, poisoned the coffee, and left again either physically or within the frame of time, because the door had also been under constant observation.

The nephew of the victim, Jerry Doss, is obviously guilty as hell and, after he left his uncle, he chatted with a boats man and asked him to keep an eye on the front door, which smelled fishy to Sgt. Black – as "the boy was obviously setting up an alibi." So the bolted front door, the nailed down window and the witness provided the young man with an apparently unbreakable alibi.

A year ago, Dan of The Reader is Warned published a blog-post, "But is it a locked room mystery? The case of the impossible alibi," asking when an alibi-trick qualifies as an impossible crime. I commented that a cast-iron alibi can only be considered an impossibility under one condition: the alibi should not merely rely on witnesses (who can be manipulated) or train tickets (which can be misinterpreted), but the murderer should appear to have been physically unable to have carried out the crime. The TV-series Monk had a couple of good examples of an impossible alibi (e.g. Mr. Monk and the Sleeping Suspect, 2003) and I think "Coffee Break" qualifies.

Yes, there's a witness who kept the cabin under observation, but the explanation for the bolted door is not what demolished the murderer's cleverly constructed alibi. After all, the locked room trick does not explain how a cigarette was lit and hot coffee was made, in a locked room, half an hour after Doss left his uncle. So, in order to logically explain this impossible poisoning, Middlebie had to come up with not one, but two, explanations that had to be stitched together.

So is it any wonder Adey ranked "Coffee Break" as one of Porges' cleverest, well-clued locked room stories? Not as great, in my opinion, as the classic "No Killer Has Wings," but definitely deserving of a spot in the top ranks. And now, more than before, I'm eagerly looking forward to the publication of The Casebook of Professor Ulysses Price Middlebie, which has such delightfully tantalizing impossible crime stories like "The Puny Giant," "The Missing Bow" and "To Barbecue a White Elephant."

I have just one question... how long do we have to wait now before we can start nagging Simms about the uncollected Julian Morse Throwbridge stories and the non-series impossible crime tales? Because they would form a very nifty volume of locked room stories. I'm just saying.
Geplaatst door TomCat on 4/27/2018