First of all, an explanation is needed for the unusual and archaic-sounding post-title I slapped on this review, which is nothing more than a contorted attempt at linking Agatha Christie's The A.B.C. Murders (1936) with John Rhode's The Murders in Praed Street (1928) – one of the first detective novels to examine the handy work of a serial killer.

John Rhode has a reputation for being a dry and dull writer, whose books herded flocks of insomniacs to dreamier pastures, but I think that reputation is undeserved. Back in 2011, I wrote jubilating review of Death on the Board (1937), in which I "defended" Rhode against the charge of being dull and have often praised The House on Tollard Ridge (1929) and Men Die at Cyprus Lodge (1943) – both handling the haunted house setting in a sober and rational manner. The Murders in Praed Street is basically an overdose of imagination peppered with out-right acts of super villainy! 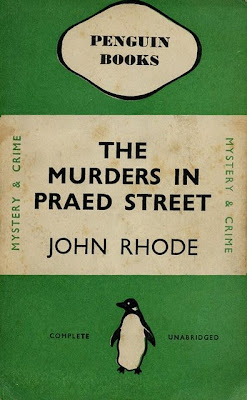 The opening of the story depicts the shop strewn Praed Street, which has turned in recent years in a dreary traffic artery of London, and the people who toil there. There's the simple-minded, but hardworking, green grocer, Mr. James Tovey. The chatty tobacconist, Sam Copperdock, whose son, Ted, is friendly with Tovey's daughter, Ivy. And the herbalist, Ludgrove, is the confident of many of the secrets of the inhabitants of Praed Street.

After being lured from his home with a telephone call, Mr. Tovey collapses in the street with an unusual blade buried in his back. The old baker, Ben Colburn, buys a brand new pipe in Copperdock's shop and cuts his tongue on a poisoned crumb of glass lodged in the stem and dies a few hours later. A middle-aged poet, Mr. Pargent, died under similar circumstances as the green grocer. The only thing Inspector Whyland has to connect these deaths is that each victim received a white bone counter, about the size of a half penny, with red roman numerals etched on them in sequential numbering. But it gets better!

A former resident of Praed Street, Mr. Martin, who resided there as a receiver of stolen goods from only "the aristocracy of thieves," is lured back with a blackmail note and is poisoned in the small cellar of No. 407, Praed Street. The house was locked and bolted from within, windows securely fastened and the body blocked the door of the cellar – and all of the keys were accounted for. And even if we learned of the solution in the next chapter, it's still a bone-fide locked room mystery and there was even more impossible material. Another bone counter was found in someone's bedroom when the house was locked up and the key in possession of the owner. Not very difficult to solve, but I appreciated its inclusion nonetheless.

This is the point where Dr. Priestley enters the picture, but the analytical and cerebral is incredible dense here and that may be due to his personal involvement in the case. The murderer is easily spotted as was the then original, well hidden-and clued motive that will be viewed today as hackneyed, but you can't slam Rhode for coming up with it first. However, the background of the motive reads like an origin story of a hero (Priestley) creating a super villain (the murderer) and involves something that is still considered controversial today. I couldn't help but feel somewhat sorry for the murderer and Priestley came-off as a dick in that part.

Under its pulp-like exterior, The Murders in Praed Street has a lot of modern-day grim and grit. It's the Golden Age of Detectives' answer to The Dark Knight Rises and I just love how apt the opening quote of this post is for this book. Even the endings share some similarities. But for the villainy, Rhode seems to have tapped from the Sherlock Holmes canon. The image of The Black Sailor and the numeral warnings recalled the vengeful Jonathan Small from The Sign of Four (1890) and Rhode's love for deadly gadgets got echoed another one of Holmes' iconic adversaries.

My only quibble is that none of the victims made the connection themselves. It seems such an obvious thing to remember, especially in the face of a rising body count. Anyway, I was glad to discover that I had not become too jaded and was still able to enjoy the ride, even if it's one of the oldest, timeworn rides in the park.

Oh, and shame on you, Mr. Rhode. Writing about working class people and criminal folks, and addressing controversial topics while you're at it, when you're suppose to be writing posh thrillers with smart aleck dialogue or the gentry's plight. You were a man and published this book in 1928. What are scholars supposed to do with you? Do you think Curt Evans' book, Masters of the Humdrum Mystery: CecilJohn Charles Street, Freeman Wills Crofts, Alfred Walter Stewart and the British Detective Novel, 1920-1961 (2012), hawks itself?
Geplaatst door TomCat on 8/10/2013