A question was posted on the GAD group asking the list-members whom of John Dickson Carr's series detectives they preferred, Dr. Gideon Fell or Sir Henry Merrivale?

As you may or may not have noticed, John Dickson Carr happens to be my favorite mystery writer and having to pick a favorite character seems like an impossibility fitting the motif of his overall work, however, I have no problem with picking H.M. over Fell. No problem whatsoever. The "Old Man" is a more lively and entertaining character, whose cases often are an odd, but strangely balanced, hodgepodge of gothic material, farcical comedy, spies and criminals of international repute – while upholding the standards of the traditional detective story. And the impossible crimes, of course!

But, for me, it's also H.M.’s childlike embrace of life and schoolboy antics, as childish and petty as they can actually be at times, which made the entire series fun to read – even the supposedly bad ones from a later vintage. That's not something I can say for Dr. Fell's involvement in The House at Satan’s Elbow (1965), Panic in Box C (1966) and Dark of the Moon (1967). A Graveyard to Let (1949) and Night at the Mocking Widow (1950) may not be the greatest mystery novels ever committed to paper, but they were, at least, fun to read thanks to H.M. creating a riot in the subway and handing out cigars to children. Even the worst of the Merrivale mysteries, Seeing is Believing (1941), was brightened up with the "Old Man" dictating his memoirs.

One of the list-members, Bob Houk, responded to this with, "but then there's Cavalier's Cup, for which no excuse is possible, in my opinion," which is the last of the Merrivale novels and one of two I had not yet read – until today! 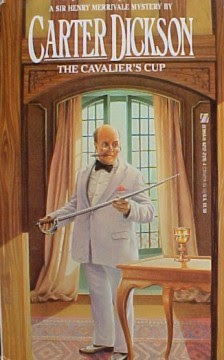 First off, I'll concede that The Cavalier's Cup (1953) is sub-par in comparison with Carr's best work, but still, it wasn’t that bad.

The setting is Tellford Old Hall, where the Oak Room was once haunted by the image of a long-dead Cavalier, Sir Byng Rawdon, who carved his final words in a windowpane with a diamond ring – before dashing off to his final battle on the lawn outside. But lately, the ghost of Sir Byng seems to have returned to the room not long after the titular cup is briefly returned to the hall, before being carted back to the bank vault, and Lord "Tom" Brace stands on personally guarding the family heirloom. Tom locks himself up in the Oak Room, a pair of stiff bolts on a door tightly wedge in its frame and windows fastened from within, while the cup stands in a safe with its sole key inside the room, but when dayspring wakes him up he's confronted with what appears to be the handy work of a poltergeist. The cup has been removed from the safe and stands in front of him on the table! Thinking he has become prone to sleepwalking, Tom refuses to go back to sleep (hence the opening quote!) and this brings his wife, Virginia, to call on Chief Inspector Masters to explain the impossible to ease her husband's mind.

Naturally, Sir Henry Merrivale is drawn into the case, who has buried himself for the last six months at Cranleigh Court to take private singing lessons under the tutelage of Signor Ravioli much to the horror of Masters – who presumed that the lack of public scandals for the last few months meant that H.M. was finally struck with a serious case of sanity.

Anyway, the miraculous occurrence of the moving cup happens again, but this time when Masters is guarding the cup and is knocked unconscious for his trouble, however, even more baffling is the appearance in the room of a cup-handled rapier that hung outside of the sealed Oak Room! The bits and pieces that make up this problem show that Carr was still a good plotter at this point in his career, but it would've worked better as a short story or a novella (e.g. the H.M. novella "All in a Maze" from The Men Who Explained Miracles, 1963) where there could've been more emphasis on the locked room trick – which was clever, well-clued and both of the occurrences properly motivated. The motive was very clever, indeed, even if it became questionable by the execution of the trick by the culprit. A sort of last minute change, but that's all I can say without spoiling it.

The problem with The Cavalier's Cup is that it's too wordy and chatty that, more often than not, merely functioned to pad out the book as it took a whopping hundred pages to get to the point of the whole story. But more than that, I think some readers disliked seeing one of their favorite writers, whose books always gave off the impression of someone who thought life was something worth fighting for, reduced to bitterly ranting about the then Labor government like an Irish poet – which makes for an odd mixture of a novel when you throw in the comedic and detective bits. Personally, I found the righteous indignation of Masters, who's a shadow of the man who first appeared in The Plague Court Murders (1934), to be most insufferable part of this book and I agree with Nick Fuller who wrote on his (I think) now defunct website, Ministry of Miracles, that the perfect ending to this novel would've been H.M. as the mastermind behind the prank to stick it to Masters, who really seem to have started disliking H.M. And after having revealed himself, H.M. throws a snowball in Masters' face! I added that last part for even more comedic effect.

So I recognize and suffered through it flaws, but did not end up hating it and liked the overall idea of the story – even if the execution leaves a lot to be desired (and cut). The whole idea was almost Scooby Doo-ish (and s/he would've gotten away with it, too, if it weren't for those meddling snoops) or could've been an episode for Jonathan Creek (like The Scented Room). This book really should’ve been entitled The Cavalier's Cup: A Ranting Comedy With Detective Interruptions.

And no. I'm not unable to give Carr a bad review, but I'm not going to reread Patrick Butler for the Defense (1956). Satan himself would've to draw up a pretty sweet contract to make that happen. By the way, Carr's historical mysteries from the same period were much better than the ones set in contemporary times, which, I think proves my theory that Carr was a chronophobiac.

Anyway, the next review will be of a modern day writer taking a shot at the locked room mystery.
Geplaatst door TomCat on 8/14/2013