Down Among the Dead Men

"Men will confess to treason, murder, arson, false teeth, or a wig. How many of them will own up to a lack of humour?"
- Frank Moore Colby

According to the Golden Age of Detection Wiki, "George Bellairs" was one of two pennames handled by Harold Blundell over a four-decade spanning career during which he wrote more than sixty mystery novels – nearly all of them with Inspector Thomas Littlejohn of Scotland Yard as the series character. There's also a mention that Blundell relocated to the Isle of Man after becoming a full-time writer and the island became the backdrop for a number of Littlejohn's cases, but I sincerely hope that The Cursing Stones Murder (1954) is not indicative for his entire body of work. Great way to open a review, I know. 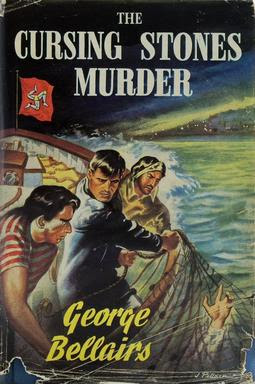 The opening scene of The Cursing Stones Murder is promising enough, though, as the Manx Shearwater, a scallop dredger, is knifing through the water in bad weather to the West Quay – where a police party is awaiting its arrival.

While dredging off the Isle of Man, they found a decomposed body of a man ensnarled in their nets. The body was unrecognizable and weighted-down with stones, which makes it murder and thus a case for Inspector Perrick of the Manx C.I.D. Inspector Perrick actually arrests a suspect after identifying the victim as the philandering Cedric Levis, who left a string of broken hearts in his wake and went missing a few weeks prior – and the person arrested was Johnny Corteen, who wanted Levis to stop seeing his sister.

The arrest of the young Corteen prompts Archdeacon Kinrade to send for his old friend from the Yard, Inspector Littlejohn, for a short holiday on the island and enjoy a bit of amateur snooping on the side. I guess Bellairs took joy in letting Littlejohn stroll across the landscape, while he talks to the locals, explores caverns and interviewing the people connected to the case without anything really happening. Well, that's not true. Someone who knew what happened got run over, but luckily, he got better and spilled the beans at the end anyway. And the cursing stones from the title, you ask, that could grant mortals the power to cast spells and curses on its fellow human beings? They were mentioned. Just like the local legends and whatever goes with the landscape. Just passing scenery. It's like a Gladys Mitchell tale that got its soul ripped out of it.

However, that would've been forgivable, where it not that there's nothing clever or anything of substance waiting for you in the final chapters – except for a drab, sordid affair that reads like the worst travel brochure in history. When I began to read The Cursing Stones Murder, I was afraid that Bellairs had foreshadowed an ending hinging on "The Birlstone Gambit" in the first line from the opening quote, "in the Island of Man, oftentimes even in the daytime, the Islanders did see men that had been dead, either without a head, or the body entire, and what manner of death they died," taken from William Blundell's History of the Isle of Man (c. 1648), but as the story began to drag I began to hope that was exactly what Bellairs was aiming for. But nothing tallied in the story with that theory and ended up disappointed here before you.

The dust jacket touts a blurb from the Rochdale Observer stating, "since Dorothy L. Sayers abandoned Lord Peter Wimsey, we should class Mr. Bellairs as our most ‘literary’ practitioner in the field of detection," but if this kind of writing is the benchmark of the literary crime novel than it goes to show that the genre has lost so much more than just its false memories of curved daggers, bodies in libraries and suspect-filled drawing rooms. Yes. This book was bad enough to make me relapse into blindly ranting against everything that isn’t a proper detective story.

So let me end this post by saying that I liked the moody cover art and the map in front of the book, because a book can never have enough scenery. Never.
Geplaatst door TomCat on 8/03/2013