A Fish Out of Water

A year before the late Evan Hunter adopted the Ed McBain moniker for the 87th Precinct series, which ran for fifty years, there was a crime novel with the stylistic trappings of a traditional whodunit, Murder in the Navy, published under the Richard Marsten byline – later reissued as Death of a Nurse (1955) as by Ed McBain. 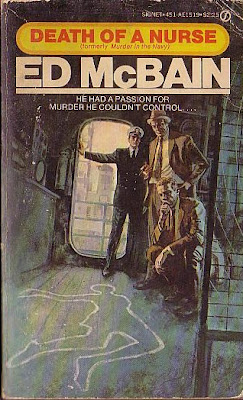 U.S.S. Sykes is a U.S. Navy destroyer and the backdrop for Death of a Nurse, on which the well-oiled, but routine, existence of the sailors is disrupted by Navy Day sight-seers and the discovery of the body of a Navy nurse in the radar shack. The reader witnesses how her boyfriend throttles Claire Cole to death without learning his identity and the case becomes a brass concern.

An investigative board of naval officers is formed, one of them being Lt. Chuck Masters, the story's protagonist, and a pair of FBI agents are send down to look into the case – which promised a nice contrasting of amateur and professional detective work. Frederick Norton and Matthew Dickason are G-Men, however, they look and act more like a snotty amateur reasoner of some celebrity of a bygone age and his Dr. Watson, but they let the captain know who's in charge of the inquiry – restricting the investigative board to gathering facts for the ship log. Nonetheless, they scooped up a handful of names from the sea of suspects by employing the same method: who were in possession of the keys to the radar shack and were, at one time or another, committed to the hospital ward and on leave during a specific period.

They had four names to pick from and that makes for a joyful game of whodunit, but, unfortunately, a second murder is written off as the suicide of Claire Cole's murderer. Consumed by remorse or feeling the hangman's noose tighten and preferred to chuck himself overboard, but the reader witnessed the unknown, shadowy assailant attacking and rolling him into the water beneath them. Here the official and investigative board, under pressure and after roughly sixty pages, closes the case and that takes the urgency out of the story – which rapidly deteriorates into a run-of-the-mill crime novel. 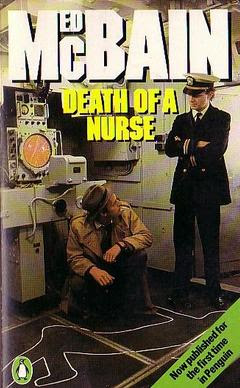 Lt. Masters is convinced that the murderer is still at large, but is forced to stop snooping around and ordered to accept the official explanation. Meanwhile, Masters and the unknown murderer are developing an interest in nurse Jean Dvorak, but at this point in the story, I was only able to marvel at the breathtaking stupidity at how some of the characters were poking and agitating the murderer – especially the last one to fall. He was one step away from dropping on his knees and popping out a small, velvet lined box containing a shiny cyanide capsule and asking, "will you murder me?"

McBain probably realized this and tried to excuse the victim by letting Jean confess that he was a good boy inside, who loved to violate classic compositions on his violin. The defense should probably take note of that. Hey, I try to keep this review up beat and you should sing my praise for not going with "Through a Keel-Haul" as a post-title for this shoddily written review.

Anyway, to whom did Jean make this confession, alongside a truckload of pesky questions about Cole Claire, while pretending to fall for this persons advances? The man who she happens to gravely suspect of having killed three people and successfully eluded investigators from different bureaus and organizations... while alone and slowly being undressed. Three of the four (would-be) victims could've easily aired their suspicions in saver environment to officials, but they practically went in front of him (the second one on an abandoned part of the ship in the dark) while saying, "I know what you did and it's going to ruin your life." I accept one dummy like that, but there were all together three of them (minus Claire Cole, who was the true victim of this book) and only one of them survived.

Death of a Nurse is well written as a story of crime, but lousy as a detective novel and that was what it posed like for the first quarter of the book. I expected more from the author of Killer's Wedge (1957) and Tricks (1987).

Finally, I wanted to come back on my previous review and I wanted to make a separate post for it, but it would've been a very short one. Anyhow, Marco Books pointed out one of the "Easter Eggs" that he had hidden in Een afgesloten huis (A Sealed House, 2013), which I had shamefully missed. I mentioned in my review that the video security of the house showed a lot of animals passing by and the first to "discover" the murder was an inquisitive tomcat, who tried to further investigate the trail of blood, but, ironically, couldn't get in on account of a locked front door and plaintively meows like the cat from A.C. Baantjer's DeKok and the Sorrowing Tomcat (1969). Again, thank you for that wonderful cameo(w)!

And will I be stopped before spinning the purr-fect pun? Find out in the next blog post.
Geplaatst door TomCat on 8/21/2013