"He thinks he's Sherlock Holmes in the flesh."
- Robert Arthur's "The Adventure of the Single Footprint" (Mystery and More Mystery, 1966)

In November of 2011, I reviewed Carpenterand Quincannon: Professional Detective Services (1998), a collection of short stories originally penned during the 1990s, in which John Quincannon abandoned a dwindling career with the United States Secret Service to begin his own detective agency with Sabine Carpenter, a former Pinkerton operative, in San Francisco of the 1890s.

The collection turned out to be a splendid farrago of period stories filled with colorful character and beloved tropes that trudge around in evocative settings, but the finishing touch came when Bill Pronzini informed me that he and Marcia Muller were collaborating on series of Carpenter and Quincannon novels – and gave me permission to announce The Bughouse Affair (2013) and The Spook Light Affair (2014) to the public. And yes. Considering the fact that I had the scoop, I should've reviewed this one a lot sooner. I was late with placing the order, and when the book finally arrived, I was deeply immersed in Jan Ekström's Deadly Reunion (1975). But enough excuses. 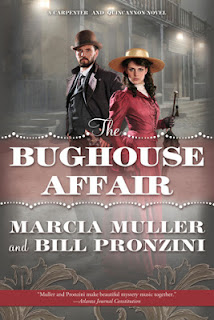 In this first of what's hopefully to be an annual affair, Carpenter and Quincannon have separate assignments to take care of that are a part of the daily routine of a detective agency.

Sabina has to snuff out an elusive and particular nasty pickpocket from the crowds patronizing an amusement park, a torch-lit bazaar and the throng of people walking the evening Cocktail Route, but the trail soon leads away from San Francisco's entertainment district to a seamier part of town. And a rather nasty murder. Somewhere else, John Carpenter is spending an uncomfortable evening in the shrubbery to stake out a house, in the hopes of catching a burglar in the act, but when his reward is almost within in his grasp he lets it literally slips through his fingers. Oh, and he's also held at gunpoint, mistaken as a fleeing thief in the night, by a venerable colleague from England. Or at least he claims to be.

During the opening of The Bughouse Affair, a newspaper scribbling by Ambrose Bierce touted that the world's most-celebrated detective, Mr. Sherlock Holmes, has emerged from Reichenbach Falls and found his way to their city where's spending a period of leisure a the home of a prominent family – who happened to be neighboring the burgled house. Quincannon shares Bierce's opinion that he's a crackbrain, adding that he also has the routine of a conman, and that appears to be the opinion of everyone who's aware that Sherlock Holmes disappeared alongside his arch nemesis in the gorge of Reichenbach Falls, which makes it even funnier if you imagine Jeremy Brett as the bughouse Holmes.

Whether he's an impostor or the actual Sherlock Holmes, he's playing the role like a violin, and even accompanies Quincannon on his next stake-out, where the case goes from bad to worse after the furtive burglar assaults the owner of the house – leaving him dead inside a locked room and than manages to disappear from the house unseen!

Pronzini usually dabbles in two kinds of illusions: practical ones that might actually work off-page and complex trickery that would not disgrace the stage of a famous illusionist (e.g. "The Arrowmont Prison Riddle," collected All But Impossible, 1981). I won't divulge under which header I place this impossible crime, but I definitely enjoyed it. Now that I think about it, the only one of these kind of stories (by Pronzini) that I disliked was "Proof of Guilt" (collected in Murder Impossible, 1990), which left me under whelmed after the editors praised it as "one of the very best impossible shorts written over the past 50 years." The solution was also a take-off on a trick that I loath and, IMHO, as dated as poisonous snakes and trapdoors. I hated it when Clayton Rawson used it and hated when Pronzini gave it a spin. Not to mention that Pronzini wrote at least a handful of other impossible shorts that were miles better (e.g. "Where Have You Gone, Sam Spade?" and "Booktaker," collected in Casefile, 1983, or "Medium Rare" in the previously mentioned Carpenter and Quincannon: Professional Detective Services). Anyway, back to the review at hand!

As to be expected in a detective story, evidence from Sabina’s pickpocket case turns up in Quincannon’s investigation, and slowly, everything begins to come together in a most satisfying way. The manner in which Quincannon, Sabina and the presumptive Mr. Sherlock Holmes take part in the explanation was very reminiscent of Leo Bruce's Case for Three Detectives (1936) – especially how the bughouse detective's solution echoed one of the tales from the canon. A conscious nod to one of their predecessors whose most famous novel is also one of the most successful parodies of the storybook detective ever written?

The Bughouse Affair is more than just flight-of-fancy through a time and place now long gone by, however, the busy tourist strip, chute-rides at the amusement park, fire-lit bazaars, crowded brothels, moldy pawnshops and the many gaudy underworld figures that populate this story adds color and details to an already imaginative and absorbing plot.

If your taste runs in the direction of a classically-styled whodunit, inexplicable crimes committed in sealed rooms, Holmesian pastiches and/or historical fiction than The Bughouse Affair is your book and I recommend you track down a copy ASAP. It might give publishers an incentive to publish more of these stories.
Geplaatst door TomCat on 2/09/2013