"Five people -- five frightened people. Five people who watched each other, who now hardly troubled to hide their state of nervous tension..."
- Agatha Christie (And Then There Were None, 1939)

Michael Carmichael was a man of great wealth and poor health, whose passing may proof to be very profitable for a handful of distant relatives, but the fine print has more in store for them than they originally bargained for – which does not even include the freak flood that cut them off from the outside world or the murderer prowling among them. 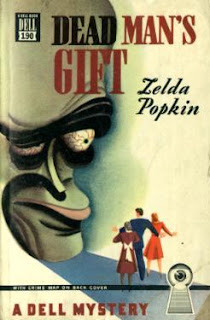 This is a preliminary sketch of Zelda Popkin's Dead Man's Gift (1941), in which her department store detective, Mary Carner, accompanies one of the sale girls, Veronica Carmichael, to the home of her late benefactor in Pennsylvania. A journalist from the Morning Globe, who wrote up her story, found an inconsistency and advised her to take someone along – putting all the pieces in place for an old-fashioned game of who-dun-it. But what a nice collection of grotesque game pieces.

The prospective legatees are a corpulent and gaudy "night-club derelict," Ruby, and a stammering farmer named Wallace. A former prizefighter who prefers to go by the name of "Joe Palooka" and a doctor of metaphysics, Cyril, who doesn't even have two pennies to rub together, but Carmichael left them each $250.000 (including Veronica).

However, there's a catch (isn't there always?): during the reading of the will by Eli Yarrow, friend and lawyer to the late Carmichael, they have to hear how every slice of the pie is topped with jocundly accusations (ranging from loose morals to murder) and accepting their inheritance means accepting the charges and certain scandal. But even less fortunate are Carmichael's sister and nephew, Tessie and Peter Whipple, who are mentioned but have nothing to show for it.  Oh, and individual shares can swell if someone turns down or is unable to collect their quarter of a million of dollars, which Carner fears may be an incentive for murder when a flood ensures that they're at each others mercy for the next day or two.

The flood does not pose a direct threat to the characters trapped in the house, as oppose to the raging forest fire in Ellery Queen's The Siamese Twin Mystery (1933) or the fortress under siege in Robert van Gulik's The Monkey and the Tiger (1965), but Popkin did a meritorious job in depicting its effect on the region – conveying a feeling of helplessness and furnishing the plot with a number of memorable scenes. News bulletins on the wireless are accompanied with requests for information on missing persons and local school turned into an emergency center. Classrooms are crowded with mothers feeding their babies, while in the Principle's Office a woman mourns the lost of her husband (drowned) with the physics lab turned into a make-shift county jail.

As to be expected, one of them dies under very peculiar circumstances, hanged by the throat from the antlers of a stuffed wapiti, in a submerged staircase, but this murder is just a by-product of a far more ingenious murder – which, when it's finally revealed, turns out to be a cleverly disguised variation on the impossible crime story. One of the suspects blurts out that Carner's solution is "too fantastic," but it might work if the right circumstances align and Popkin did a bang-up job in making that situation sound completely plausible. All in all, an enormous improvement over the slapdash plotting in her previous outing, Murder in the Mist (1940), which I reviewed on here nearly two years ago.

Zelda Popkin may not have been a contemporary rival of Agatha Christie and Christianna Brand, adepts of the closed-circle of suspects, but Dead Man's Gift is an interesting and well-done example of what many now consider a clichéd situation of a group of people isolated from the outside world – and it's slightly skewed approach makes it interesting for seasoned and beginning mystery readers alike. It's something pleasantly different without wandering away too far from the detective story.