"This is your native country. It was you and your brothers, black and white, who let me come here and live, and I hope you'll let me say, without getting maudlin, that I'm grateful to you for it."
- Nero Wolfe (Too Many Cooks, 1938)

Arthur W. Upfield was an English-born mystery writer who moved to Australia as a young man, where he wandered the outback as a jack-of-all-trades, before finally settling down behind his typewriter to carve out his legacy: twenty-nine novels featuring Detective-Inspector Napoleon "Bony" Bonaparte.

Bony is an "half-caste" Aboriginal and somewhat ahead of his time, when he first stepped on the scene in The Barrakee Mystery (1929), as an educated and well-spoken man of mixed race who moved up through the ranks to become a DI – relaying on his wits as well as his aborigine tracking skills and hunting instinct. He's basically a predator in a suit and, as he describes his own behavior, has "...no respect for rules and regulations" or "when engaged on a murder hunt... no scruples and no ethics." Bony can stake out a spot for weeks, track a suspect for miles over sun-blasted plains and read the behavior of animals to find water or bodies. A method of detection that's amplified by Upfield's talent for painting, like an Old Master, the landscape of his adopted country with words. 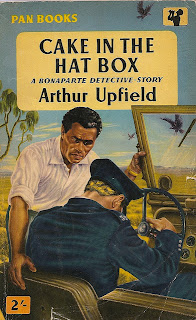 This already resulted in three unusual, but original and memorable, detective stories. Death of a Lake (1954) takes place around a draught stricken area where a dying lake is about to give up its secret. Man of Two Tribes (1956) has Bony exploring the desolate Nullarbor Plain for an acquitted murderess who wandered off a train and The Valley of Smugglers (1960) is more a Doylean novel than a mystery (i.e. second part of The Valley of Fear, 1914), but Cake in the Hat Box (1954) is the best one yet – in which Upfield evidently had more consideration than usual for the plot while continuing to sketch some striking scenes.

Agar's Lagoon is a small, dried up inland desert settlement hemmed-in by an ever-widening ring of empty bottles, estimated to total a thousand tons, because it's economically unprofitable to return them. Constable Martin Stenhouse presides over this district and is considered competent, but neither admired or loved, which leaves few to mourn him when a truck driver announces that he found Stenhouse, shot dead, sitting in his jeep on the road to Agar's Lagoon – and his Aboriginal tracker, Jack Musgrave, is missing and presumed guilty.

The murder of Constable Stenhouse appears to be a close-and-shut against Musgrave, with his apprehension and conviction only a mere formality, but Bony's keen eye for detail spots a few inconsistencies and proves a set-up. However, he's not the only one looking for justice as smoke signals tell him that the natives may be looking for their own particular brand of justice for Musgrave. It's not just a case of catching whoever's responsible for the murder of Stenhouse and the disappearance of Musgrave, but doing it before a spear does, which, I have heard, are very hard to outrun.

Cake in the Hat Box is a wonderful tour of a dusty nook of the Australian continent, from the desert lagoon with its halo of glass to meteorites streaking across the night sky, becoming through Upfield's words almost a character in itself – populated with the kind of unusual, often rugged outback people you'd expect to find in a place like that. But the finishing touch was a satisfying, twisty plot that had a delightfully classic surprise in store that I didn't saw coming. Upfield proved in Man of Two Tribes that he had a wealth of imagination and here he showed he also knew what to do with it.

In closing, the back cover of Cake in the Hat Box asks: Are YOU an Upfield fan? My answer: I'm getting there!