The Wicked Witch is Dead!


Nancy Barr Mavity's The Case of the Missing Sandals (1930) was one of two novels that I was able to procure from this now forgotten mystery novelist, which served as my introduction to her series detective, journalist Peter Piper, who has more than just a professional interest in the murder of the leader of a peculiar cult – who settled down in the unfrequented hills of San Francisco. 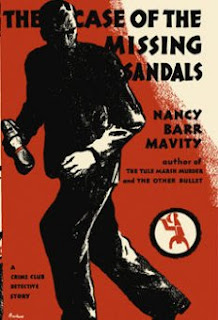 Peter Piper is sketched as a preposterously tall man with a long, ugly, intelligent face and a black head of hair that should've been planted in a barber's chair, but his eyes, imprisoned behind thick glasses, are illuminated by an incorrigible enthusiasm. He's also in possession of a brain that constantly processes and analysis information, which makes him perfect as both a journalist and as a detective. As a matter of fact, Piper functions through out the story as both journalist and private investigator, forcing him to make decision on what knowledge to share and with whom – as well as keeping rival journalists at bay. I think this dual conflict between jobs was the most interesting aspect of his character and gave some justification to his actions (like stowing away the prime suspect from the police).

When the story opens, Piper is in the company of Hubert Graham, District Attorney, discussing one of their recent success stories, when Graham tells him of a man whose wife gave away their money to a woman going by the name of Luna – a cult of personality with her own following. However, they have no grounds to launch an investigation and Graham hopes that Piper finds something that can be of mutual use, but the body of Luna a day after his first, tentative steps in this case was not part of the plan.

Unfortunately, the next quarter of the book consists of hounding the main suspect, a young man named Earl Vincent, to whom all the clues point. This took away from a potentially interesting and eerie setting (a cult of witches on a desolate hill) with an intriguing murder (stabbing and shooting of a witch laid out over a bench and the titular sandals missing, etc.) that was not looked at until the race for Earl Vincent was run. Ironically, all that running around did end up being the most exciting and interesting part of the book and was not devoid of merit, which included a semi-impossible disappearance from a ship – but we've seen tricks like that one before. 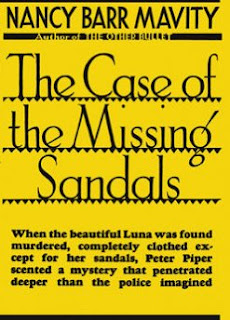 More interesting was Piper pleading/threatening Graham not to expose Vincent to a third-degree, which he was convinced would break the spirit of the kind-hearted, but frightened boy, even if turns out that he did kill Luna in a rage. I got the impression from the story that third-degreeing a confession out of a suspect was still a standard practice at the time, but Anthony Abbot's The Murder of Geraldine Foster (1930; same year as Missing Sandals!) noted that a third-degree confession was already inadmissible in court by that time – not that Commissioner Thatcher Colt let the law stop him from experimenting on a suspect. And I suppose the acceptability of a third-degree still differed from state-to-state in the early 1930s.

Piper's follow up investigation only went to show indubitably that the story had run its course, as one interview followed another, reminiscent of some of Ngaio Marsh's lesser efforts, but continued to lumber on undisturbed for another 170+ pages – and the eventual revelation does not make up for lost time. There are some interesting bits and pieces in this last portion of the story, like the portrayal of the old blind gatekeeper, Jackson, who's dismissed by the police as a superstitious illiterate, but Piper sees in him a person of towering goodness who sincerely believes in the forces of good and evil intervening in every day life and sets out to out-wit the Prince of Darkness himself, but as a detective story, this one leaves a lot to be desired.

I have read some encouraging comments about Mavity and have the feeling that I should've started off with The Other Bullet (1930), which appears to have been her most popular book, but I'll safe that one for next month.

Well, that's another disappointing read that churned out a mediocre review.
Geplaatst door TomCat on 11/25/2012