A Casualty of War

I can't remember if I brought this up before or not, but I have a soft spot for detective stories set during the dark years of WWII. The atmosphere provided by the black-outs, food rationing, air-raid drills and German bombers roaming the skies are often integral to the plot and offer up a picture of a time that now seems as far removed from our every day reality as a medieval castle under siege – even though there are still people around who lived through the war that tore the European continent asunder.
It was also a period that had the elements needed to furnish a story with an array of backdrops, characters, circumstances and motives unique to that point in history and these scenarios were explored in-depth by mystery writers, back then and now, in their stories. Case in point: John Rhode's The Fourth Bomb (1942). 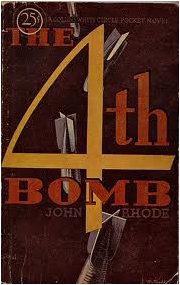 Yardley Green is one of those sleepy hamlets, tucked away in the placid, slumberous countryside, which makes it an unlikely military objective for air raids from enemy bombers, however, one evening the dozing members of this community find themselves rudely awakened when an enemy aircraft drops a stick of bombs on them – which leaves two people wounded and one dead. The only fatality is a merchant in precious stones, Mr. Sam Gazeley, found in a ditch beside the crater of the fourth bomb and naturally the local authorities presume that the man was killed by the impact of the blast – and chalk his name up among the casualties of war.
But was Sam Gazeley a victim of an enemy attack or was he perhaps struck down by someone a lot closer to home? The situation at the bomb site seems to be favoring the former, but it quickly proves to be a problematic solution that is unable to erase every single question mark, that are doodled all over this case, when it becomes clear that a special belt, with small pockets filled with valuable diamonds, was not strapped around the waist of the dead merchant – and failed to turn up on what now turns out to be a crime-scene. As a result, Jimmy Waghorn is drawn into the case and he quickly comes into contact with a witness who spoke with Gazeley at the moment when the German aircraft began unloading its explosive cargo on Yardley Green!
Unfortunately, Waghorn is also tied to the Intelligence bureau, which does not give him the time needed to close the book on this investigation himself, but there's always his old friend, Dr. Lancelot Priestley.
The opening chapters were bursting with promise, demonstrating once again the dubious nature of the claims that John Rhode penned stories that could turn every long-suffering insomniac into a droopy-eyed Rip van Winkle, but this time that quality of story telling didn't sustain itself and the middle section can easily be summed up as a distribution point for providing his severest critics with ammunition. It was lethargic, repetitive, and, worst of all, just plain dull! The plot came into motion again when Dr. Priestley took over from Jimmy Waghorn, but that was when there were only thirty pages left to go and I was simply incapable of caring who had done in Gazeley (or what had happened to the diamonds) at that point in the story. Nevertheless, I have to admit that I rather liked watching the cerebral Dr. Priestley play the role of a modern day dues ex machina, logically explaining that what eluded mere mortals, and the final chapter was very well written – even if the ironic turn of events was rather predictable.
The Fourth Bomb is a classic example of a novel that should've been a novella at most. It has an excellent set-up and the solution is adequate, showing a rather clever crime made possible due to the wartime conditions, but everything that was uncovered in between them should've been condensed to one or two chapters – which would've made for a splendid novella instead of the bogged down novel that it is now.
Going over this review, I can't help but be surprised at how another disappointing read translated itself into a shoddily written review. Why can't I be better at this stuff?
Anyway, on a slightly unrelated note: I have found a solution to the ratio problem between GAD and Post-GAD reviews. I wedge this Golden Era between 1920 and 1950, but since I will partake in Bev's Vintage Mystery Challenge of 2012 I will simply copy her Gold standard by adding a decade to mine – which will immediately smoothen out the discrepancy in the ratio. Moving the goalpost: problem solved... for now. ;)
Geplaatst door TomCat on 12/05/2011