"An arrow may fly through the air and leave no trace; but an ill thought leaves a trail like a serpent."
- Charles Mackay.

When I first accompanied Sir Hugh Corbett and Ranulf-atta-Newgate on one of their royal assignments, chronicled in The Devil's Hunt (1996), they were ordered to go down to the university town of Oxford, where death was haunting the college hallways like an elusive ghost and an ungraspable presence, known as the Bellman, slithered through the streets after dark to post treacherous letters on church doors, in order to restore equilibrium and dispense King's justice – in which they succeeded but at a price! An arrow plugged Corbett, but it was uncertain if the wound would prove itself to be fatal one and readers found themselves dangling on that cliffhanger for nearly three full years. I recommend going over my review of that novel before reading this one. 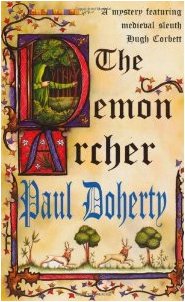 The Demon Archer (1999) picks up the threads, which spins the yarn of Sir Hugh Corbett's career, and we learn that the King's favored clerk was able to disentangle himself from the cold, protrusive embrace of the fray-cloaked specter of death, with only a scar to remind him of their short-lived fling, and once again able to serve the crown that rests on the brow of Edward I.

When Corbett and Ranulf report back for duty, they are dispatched post-haste to the estate of the murdered Lord Henry Fitzalan, who was felled by an assassin's arrow during a hunting party in Ashdown Forest, and his death may have political ramifications – since Philip IV of France had handpicked him to lead an English envoy into his kingdom. A suspicious honor, to say the least, and Edward I wants Corbett to find out as much as possible, under the cover of a murder investigation, but the assassination of the detested nobleman might have a germ that shot it roots a lot closer to home.

Lord Henry Fitzalan was a man who consorted with harlots and witches and his lecherous tendencies made him the scourge of the local women, but also within his own domestic circle he was resented. He kept his younger brother, Sir William, on a short leash and lived with his half-sister, Lady Madeleine, the stringent mother superior of St. Hawisia's priory, in a permanent state of armed truce and the forests encompassing his estate seemed to be teeming with natural enemies – one of them an outlaw who refers to himself as the Owlman.

I remember reading a comment once, from a reviewer, stating that Paul Doherty seemed more comfortable when he was operating within borders of medieval England and the intricate web of deception, intrigue and hidden motives he wove between the estate of the slain nobleman and the court of Philip IV seems to support that statement – as he effortlessly manipulated every strand in this vast mesh of plot threads without loosing grip on even a single one of them. This is not a feat that is achieved in even the best stories from the Ancient Egyptian series, but here it's pulled off to near perfection and this is reflected in the quality and construction of an excellent plot – even though the main clues were ambiguous and the story lacked the lure of an impossible situation. The narration was also more lucid with a body count that failed to run itself up into the double digits. Yes, that's right, your eyes can wander from one chapter to another without stumbling over, at least, two or three bodies along the way!

It's obvious that Paul Doherty is in control of this story, but the same can't be said about Corbett and Ranulf. The former has a hard time getting a firm grasp on a solution for the problems facing him and is even treated to a rhapsody of whizzing arrows, while Cupid empties his quiver with amazing aim and accuracy on the latter – who promptly falls in love when his eyes comes to rest on the beautiful daughter of one of the suspects.
Corbett eventually succeeds to pull away the cowl, which shrouded the face of his adversary who lurked in the shrubberies and loosened a barrage of arrows that claimed four victims, after he finally managed to put a name to the first victim of this demonic archer – a woman whose naked and decaying corpse was left on the doorstep of the priory. But the political angle, centering on the British envoy and the Treaty of Paris, was wrapped up with as much satisfaction as the murders in Ashdown Forest and fitted seamlessly with the actual historical facts and evidence of what was going on at the time.

The Demon Archer is another fascinating and lively sketch of a time when court intrigue dictated the political agenda of Europe, which Doherty perfectly captured and re-imagined as a modern detective story, mingling historical facts and faces with fictitious crimes and characters, and it works!

Please note that I am really tired when this was written (been busy) and this may or may not have translated itself into a sub par review (can't even tell that at the moment), but rest assured, I will be back on the old track for the next one!
Geplaatst door TomCat on 12/10/2011